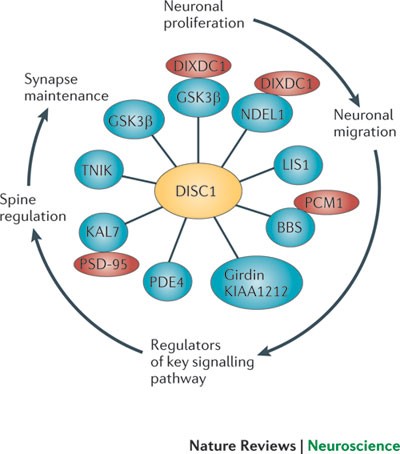 Brain scans have revealed how a genetic mutation linked to major psychiatric disorders affects the structure, function and chemistry of the brain.

The study offers further clues about how the mutation increases the risk of schizophrenia, bipolar disorder and depression.

Experts say the findings could help in the quest for new treatments.

Researchers led by the University of Edinburgh scanned the brains of people that have a specific genetic mutation that causes part of one chromosome to swap places with another.

The mutation results in disruption of a gene called DISC1, which is associated with schizophrenia, bipolar disorder and recurrent major depression.

The team found that people with the genetic mutation had changes in the structure of their brain. These changes were linked with the severity of their symptoms of mental ill health.

They also showed that carriers of the mutation had lower levels of a chemical called glutamate in certain areas of their brain. Reduced glutamate levels have been strongly linked with schizophrenia in previous studies.

Researchers say their findings confirm that the DISC1 mutation is associated with a significantly increased risk of psychiatric illness.

They hope that continuing to study people with the mutation will reveal new insights to the biological mechanisms that underpin these conditions.

The DISC1 mutation was first identified in a Scottish family that showed unusually high rates of major psychiatric disorders. Scientists have been studying generations of the family for 40 years but this is the first time they have scanned their brains.

Professor Stephen Lawrie, Head of the Division of Psychiatry at the University of Edinburgh, said: "This study confirms and extends the genetics of DISC1, and shows how that and similar genetic effects can increase the risk of major mental illnesses."