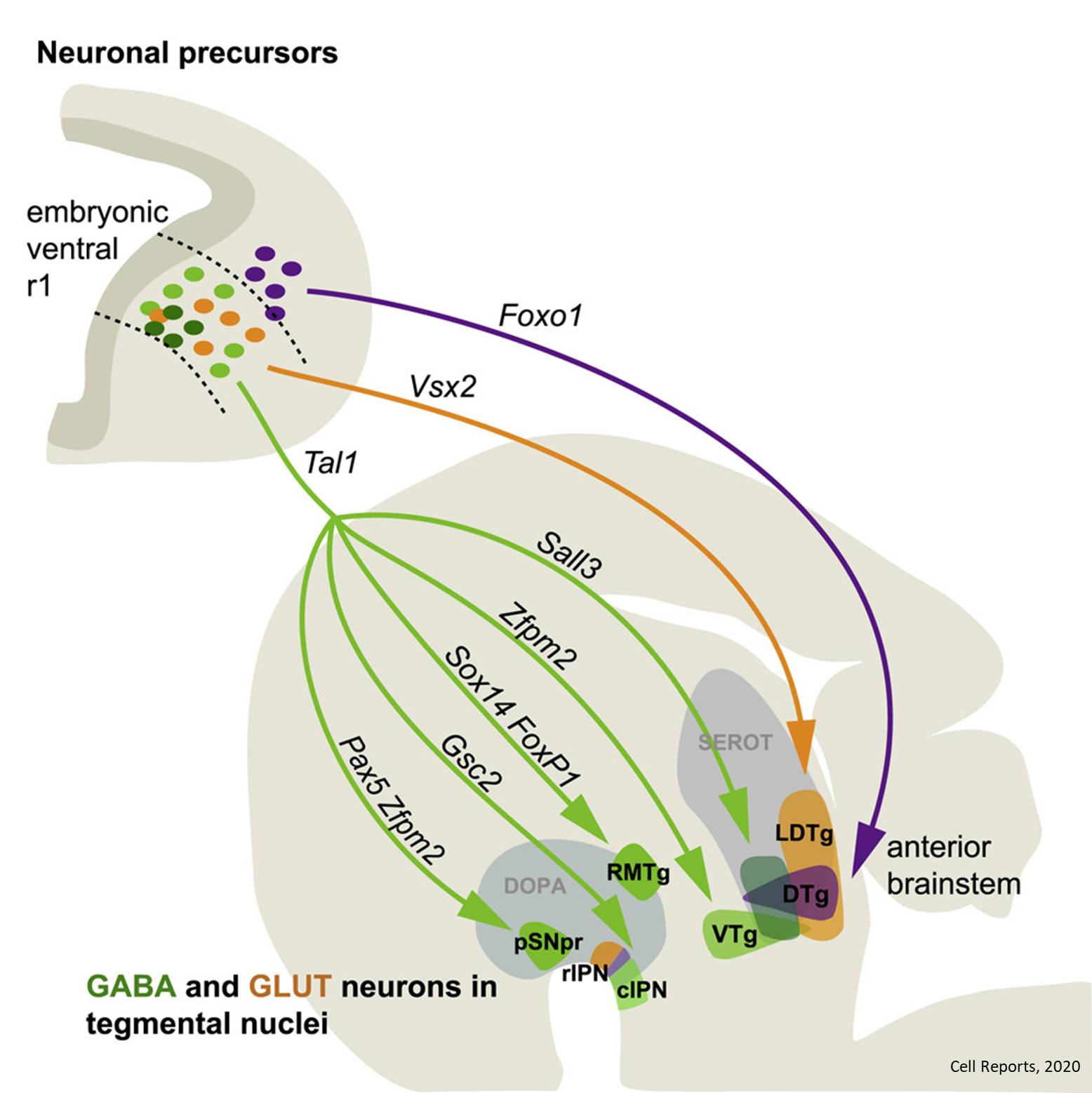 A recent study reveals how gene control mechanisms define the identity of developing neurons in the brainstem. The researchers also showed that a failure in differentiation of the brainstem neurons leads to behavioural abnormalities, including hyperactivity and attention deficit.

The mammalian brain is big, but the state of its activity is controlled by a much smaller number of neurons. Many of these are located in the brainstem, an evolutionarily conserved part of the brain, which controls mood, motivation and motor activity. What are the brainstem neurons like? How do they develop in the embryonic brain? How are defects in their development reflected in brain activity and behaviour?

A research group has addressed these questions by studying gene regulation in the embryonic brainstem.

The phenotype of a neuron, to a large extent, is determined already early in an embryo. We have shown how certain selector genes, which are expressed soon after the onset of neuronal differentiation, and control the activity of other neuron specific genes, determine the identity of the developing neuron.

The authors show that gene expression dynamics during bifurcation of the GABAergic and glutamatergic lineages and show how active Notch signaling promotes GABAergic fate selection in post-mitotic precursors.

The past few years have provided us with very powerful tools to study gene expression in individual cells. By analysing gene products in embryonic brain cells, we can now follow the differentiation paths of neurons and examine what exactly happens when the developing cells take different paths - for example in becoming a neuron either inhibiting or activating its target. Differentiation paths branch to produce the remarkable neuronal diversity that brain function is based on. According to the gene-expression-based identities, the immature neurons find their location in the brain and make contacts with other components of the neural circuitry.

They identify GABAergic precursor subtypes that give rise to distinct tegmental nuclei and demonstrate that Sox14 and Zfpm2, two TFs downstream of Tal1, are necessary for the differentiation of specific tegmental GABAergic neurons.

What if the gene expression signposts point in wrong directions and the developing neurons are misrouted? In the brainstem, this has grave consequences on both brain function and behaviour.

In such a situation, "We have studied mice with an imbalance in differentiation of neurons either activating or inhibiting the dopaminergic and serotonergic neurotransmitter systems. These mice are hyperactive and impulsive, they have changes in their reward sensing and learning. Their hyperactivity can be alleviated with drugs used to treat human attention and hyperactivity deficits," as the senior author clarifies.

In sum, the author indicates that, "Despite active research, the developmental basis of many human behavioural disorders are still poorly understood. We do not know yet if the human counterparts of the neurons we studied are involved in these deficits. Nevertheless, from the perspective of behavioural regulation, this specific group of neurons is highly important and there is still lot to learn about them."