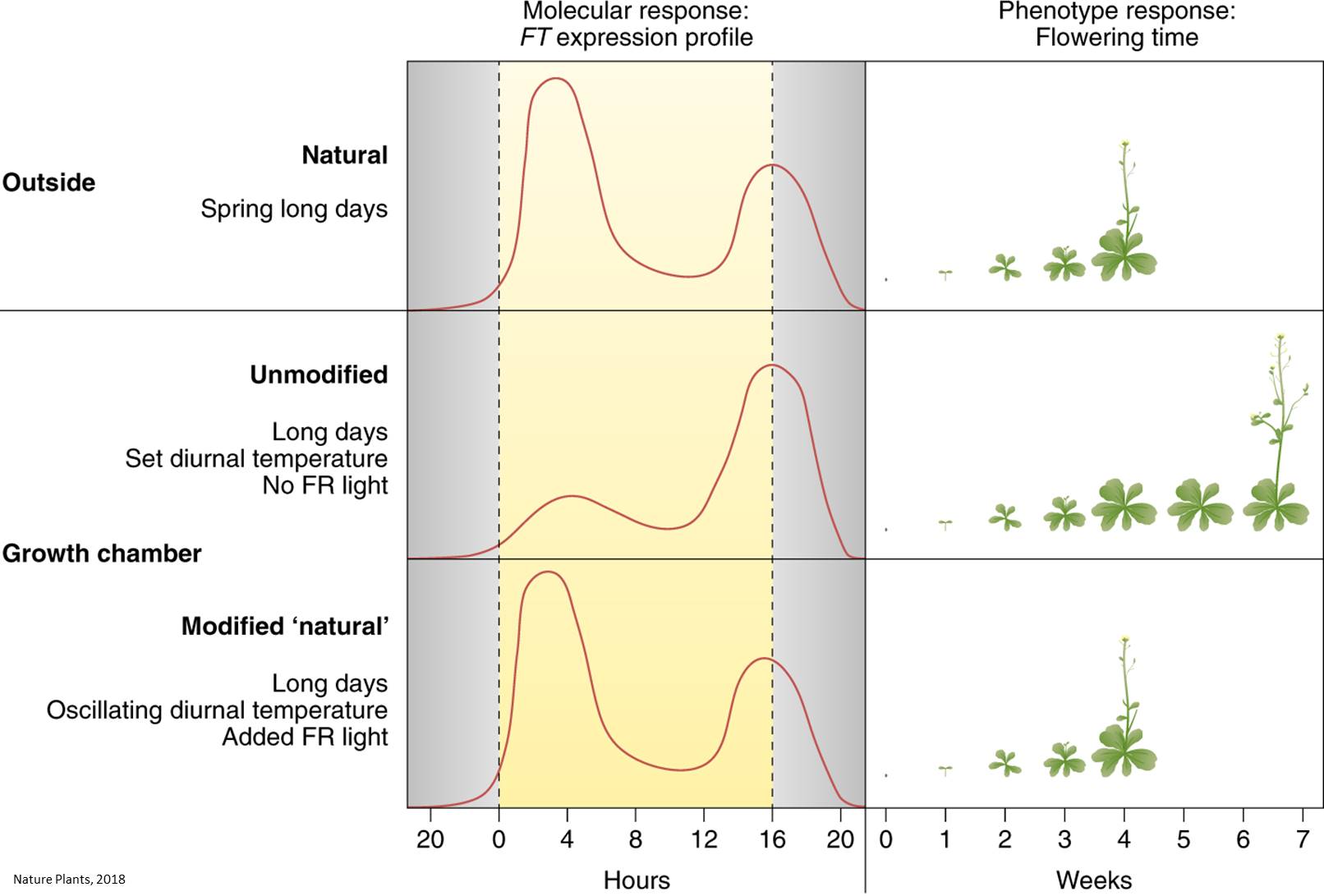 For angiosperms -- or flowering plants -- one of the most important decisions facing them each year is when to flower. It is no trivial undertaking. To flower, they must cease vegetative growth and commit to making those energetically expensive reproductive structures that will bring about the next generation.

Knowledge of this process at the cellular level is critical for understanding how plants allocate resources and produce the components we care most about -- including the grains, tubers, leaves, nuts and fruits that mean so much to humans and animals alike.

In a paper published in the journal Nature Plants, an international team of researchers has discovered that the gene FT -- the primary driver of the transition to flowering in plants each spring -- does something unexpected in Arabidopsis thaliana plants grown in natural environments, with implications for the artificial growing conditions scientists commonly used in the lab. The team, showed that FT has a peak of activity every morning leading up to the transition, something that scientists had not previously seen in Arabidopsis, a model plant that is widely studied for understanding the molecular details of the transition to flowering. The morning peak of FT activity causes plants to transition earlier from vegetative growth to flowering.

Prior research, which saw only an evening peak of FT gene activity, had been conducted on Arabidopsis plants grown indoors under fluorescent light. The team -- which includes researchers grew their plants outside under sunlight.

Researchers wanted to do this experiment because conditions at the summer solstice in Seattle, where the lab is located, are similar to the standardized, artificial "long-day" growing conditions for Arabidopsis: 16 hours of light and eight hours of darkness.

"I always wanted to grow plants outdoors in conditions similar to the lab just to make sure that what we're seeing in lab with Arabidopsis is really what's happening in nature," said the author.

The team grew non-transgenic Arabidopsis plants outdoors for five consecutive summers and compared them to plants grown indoors under artificial long-day conditions. Outdoor plants produced fewer leaves than indoor plants, indicating that the outdoor plants flowered earlier. Both outdoor and indoor plants showed evening peaks of FT gene activity, but outdoor-grown plants also showed a morning peak of FT activity. They concluded that the indoor, artificial growing conditions missed key qualities of natural conditions, throwing off expression of the FT gene and the trait it governs. When active, the FT gene produces a protein that travels from the leaves to the shoot apical meristem -- the niche of stem cells in the shoot that produces above-ground growth -- and switches the meristem from vegetative growth to floral growth.

To identify the differences between indoor and outdoor growing conditions, the group focused on light. The fluorescent bulbs commonly used in Arabidopsis research do not emit the same wavelengths of light that sunlight does. Fluorescent bulbs, for example, generate less light from far-red wavelengths. In the outdoor growing plots, the ratio of red-wavelength light to far-red wavelength was about 1-to-1, but for fluorescent bulbs this ratio is higher than 2, which means they emit more red light than far-red. When the researchers added a far-red LED lamp to the indoor growth chambers to mimic outside light, the Arabidopsis plants then showed a morning peak of FT gene activity.

In addition, by modifying the temperatures in the indoor growth chambers to cycle daily from about 16 degrees Celsius to almost 23 C -- or from 61 degrees Fahrenheit to about 73 F -- the evening FT gene activity was reduced, similar to the outdoor plants.

FT has been studied in other plants, including some crop plants, which also show morning peaks of FT expression. But most commercially important plants are too large or grow too slowly for the controlled-environment studies that are required to determine the cellular and genetic details of plant traits. That is why Arabidopsis, a small, fast-growing weed from the mustard family, is widely used as a substitute model organism.

The team's findings are an opportunity to revisit the artificial growing conditions, according to the author.

"Arabidopsis has been studied for decades. Researchers set up their indoor growing conditions the best they could, given equipment, time and funding, and passed those conditions down to scientists they trained," said the author. "But we need to change those conditions so that what we find in the lab reflects nature more closely. If we see a change in flowering by making these minor alterations, I imagine that other traits will change as well."

"We show that just a few simple modifications are needed to the artificial growing conditions, which researchers are using worldwide, so that lab research on Arabidopsis more and other plants accurately mimics outdoor growing conditions," said the author. "This ensures that the discoveries made in the lab will be more comparable to what the biological processes are -- at the cellular and molecular level -- in other plants of interest in nature."