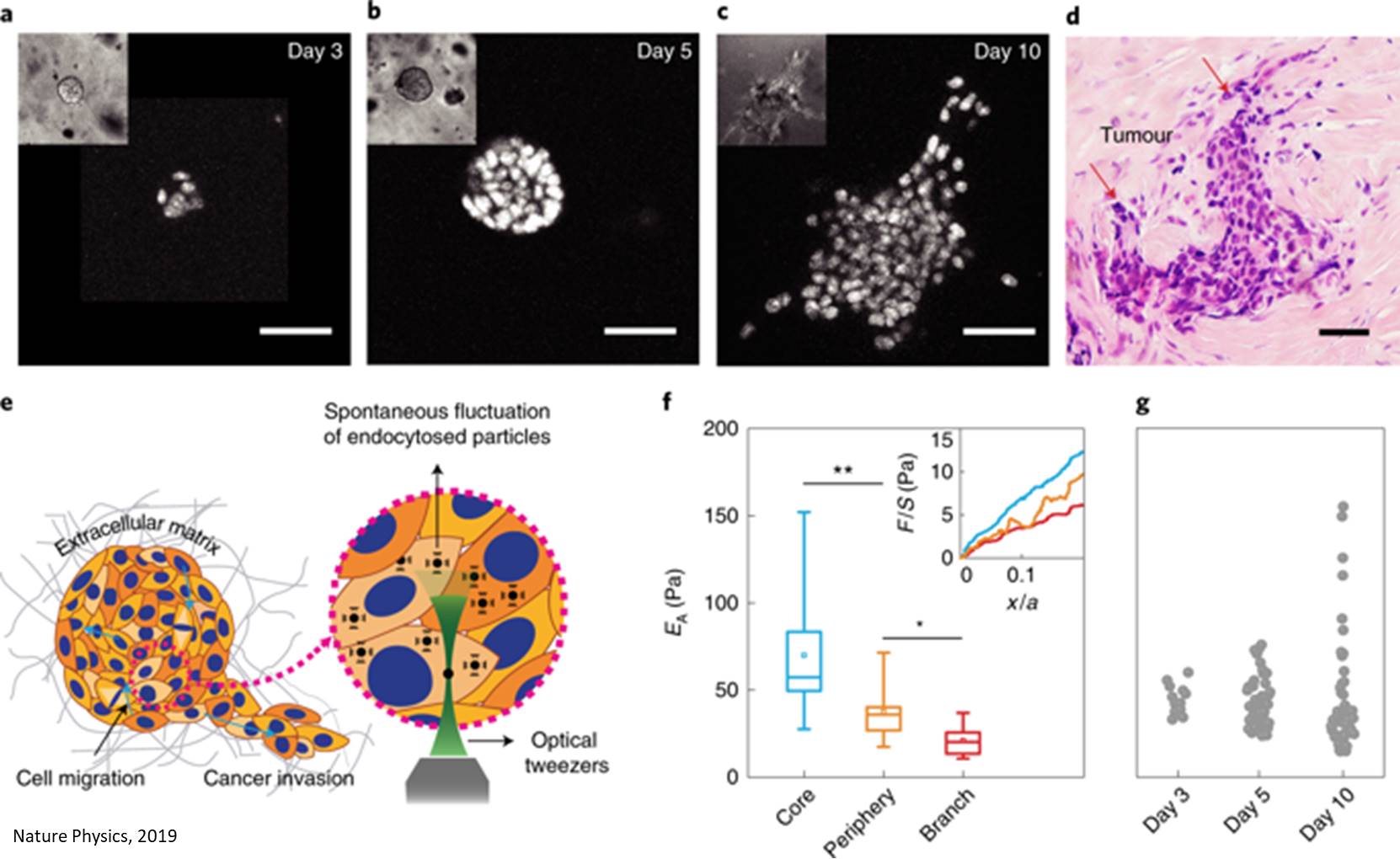 Engineers have tracked the evolution of individual cells within an initially benign tumor, showing how the physical properties of those cells drive the tumor to become invasive, or metastatic.

The team carried out experiments with a human breast cancer tumor that developed in the lab. As the tumor grew and amassed more cells over a period of about two weeks, the researchers observed that cells in the interior of the tumor were small and stiff, while the cells on the periphery were soft and more swollen. These softer, peripheral cells were more apt to stretch beyond the tumor body, forming "invasive tips" that eventually broke away to spread elsewhere.

The researchers found that the cells at the tumor's edges were softer because they contained more water than those in the center. The cells in the center of a tumor are surrounded by other cells that press inward, squeezing water out of the interior cells and into those cells at the periphery, through nanometer-sized channels between them called gap junctions.

"You can think of the tumor like a sponge," says the senior author. "When they grow, they build up compressive stresses inside the tumor, and that will squeeze the water from the core out to the cells on the outside, which will slowly swell over time and become softer as well -- therefore they are more able to invade."

When the team treated the tumor to draw water out of peripheral cells, the cells became stiffer and less likely to form invasive tips. Conversely, when they flooded the tumor with a diluted solution, the same peripheral cells swelled and quickly formed long, branchlike tips that invaded the surrounding environment.

The results, which the team reports in the journal Nature Physics, point to a new route for cancer therapy, focused on changing the physical properties of cancer cells to delay or even prevent a tumor from spreading.

Scientists suspect that cancer cells that migrate from a main tumor are able to do so in part because of their softer, more pliable nature, enabling the cells to squeeze through the body's labrynthine vasculature and proliferate far from the initial tumor. Past experiments have shown this soft, migratory nature in individual cancer cells, but the team is the first to explore the role of cell stiffness in a whole, developing tumor.

"People have looked at single cells for a long time, but organisms are multicellular, three-dimensional systems," the author says. "Each cell is a physical building block, and we're interested in how each single cell is regulating its own physical properties, as the cells develop into a tissue like a tumor or an organ."

The researchers used recently developed techniques to grow healthy human epithelial cells in 3D and transform them into a human breast cancer tumor in the lab. Over the next week, the researchers watched as the cells multiplied and coalesced into a benign primary tumor that comprised several hundred individual cells. Several times throughout the week, the researchers infused the growing number of cells with plastic particles.

They then probed each individual cell's stiffness with optical tweezers, a technique in which researchers direct a highly focused laser beam at a cell. In this case, the team trained a laser on a plastic particle within each cell, pinning the particle in place, then applying a slight pulse in a attempt to move the particle within the cell, much like using tweezers to pick an egg shell out from the surrounding yolk.

The degree to which researchers can move a particle gives them an idea for the stiffness of the surrounding cell: The more resistant the particle is to being moved, the stiffer a cell must be. In this way, the researchers found that the hundreds of cells within a single benign tumor exhibit a gradient of stiffness as well as size. The interior cells were smaller and stiffer, and the further the cells were from the core, the softer and larger they became. They also became more likely to stretch out from the spherical primary tumor and form branches, or invasive tips.

To see whether altering cells' water content affects their invasive behavior, the team added low-molecular-weight polymers to the tumor solution to draw water out from cells, and found that the cells shrank, became more stiff, and were less likely to migrate away from the tumor -- a measure that delayed metastasis. When they added water to dilute the tumor solution, the cells, particularly at the edges, swelled, became softer, and formed invasive tips more quickly.

As a last test, the researchers obtained a sample of a patient's breast cancer tumor and measured the size of every cell within the tumor sample. They observed a gradient similar to what they found in their lab-derived tumor: Cells in the tumor's core were smaller than those closer to the periphery.

"We found this doesn't just happen in a model system -- it's real," the author says. "This means we may be able to develop some treatment based on the physical picture, to target cell stiffness or size to see if that helps. If you make the cells stiffer, they are less likely to migrate, and that could potentially delay invasion."

Perhaps one day, clinicians may be able to look at a tumor and, based on the size and stiffness of cells, from the inside out, be able to say with some confidence whether a tumor will metastasize or not.
"If there is an established size or stiffness gradient, you can know this will cause trouble," the author says. "If there's no gradient, you can maybe safely say it's fine."