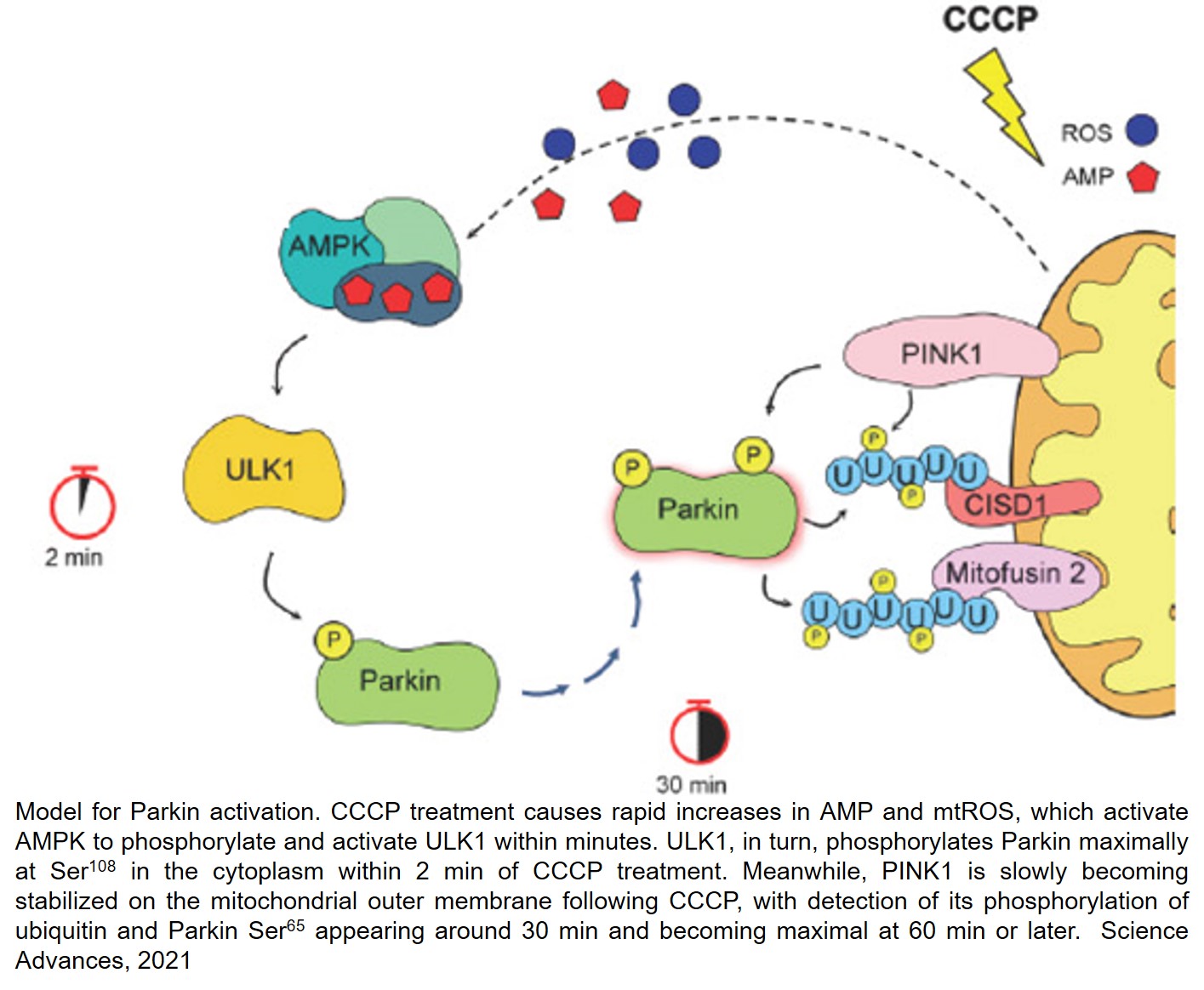 When cells are stressed, chemical alarms go off, setting in motion a flurry of activity that protects the cell's most important players. During the rush, a protein called Parkin hurries to protect the mitochondria, the power stations that generate energy for the cell. Now researchers have discovered a direct link between a master sensor of cell stress and Parkin itself. The same pathway is also tied to type 2 diabetes and cancer, which could open a new avenue for treating all three diseases.

"Our findings represent the earliest step in Parkin's alarm response that anyone's ever found by a long shot. All the other known biochemical events happen at one hour; we've now found something that happens within five minutes," says the senior author of the new work, detailed in Science Advances. "Decoding this major step in the way cells dispose of defective mitochondria has implications for a number of diseases."
'
Parkin's job is to clear away mitochondria that have been damaged by cellular stress so that new ones can take their place, a process called mitophagy. However, Parkin is mutated in familial Parkinson's disease, making the protein unable to clear away damaged mitochondria. While scientists have known for some time that Parkin somehow senses mitochondrial stress and initiates the process of mitophagy, no one understood exactly how Parkin was first sensing problems with the mitochondria--Parkin somehow knew to migrate to the mitochondria after mitochondrial damage, but there was no known signal to Parkin until after it arrived there.

The lab, which is well known for their work in the fields of metabolism and cancer, spent years intensely researching how the cell regulates a more general process of cellular cleaning and recycling called autophagy. About ten years ago, they discovered that an enzyme called AMPK, which is highly sensitive to cellular stress of many kinds, including mitochondrial damage, controls autophagy by activating an enzyme called ULK1.

Following that discovery, the authors began searching for autophagy-related proteins directly activated by ULK1. They screened about 50 different proteins, expecting about 10 percent to fit. They were shocked when Parkin topped the list. Biochemical pathways are usually very convoluted, involving up to 50 participants, each activating the next. Finding that a process as important as mitophagy is initiated by only three participants--first AMPK, then ULK1, then Parkin--was so surprising.

To confirm the findings were correct, the team used mass spectrometry to reveal precisely where ULK1 was attaching a phosphate group to Parkin. They found that it landed in a new region other researchers had recently found to be critical for Parkin activation but hadn't known why.

The authors did precise biochemical studies to prove each aspect of the timeline and delineated which proteins were doing what, and where. The research now begins to explain this key first step in Parkin activation, which they hypothesize may serve as a "heads-up" signal from AMPK down the chain of command through ULK1 to Parkin to go check out the mitochondria after a first wave of incoming damage, and, if necessary, trigger destruction of those mitochondria that are too gravely damaged to regain function.

The findings have wide-ranging implications. AMPK, the central sensor of the cell's metabolism, is itself activated by a tumor suppressor protein called LKB1 that is involved in a number of cancers, as established by authors prior work, and it is activated by a type 2 diabetes drug called metformin. Meanwhile, numerous studies show that diabetes patients taking metformin exhibit lower risks of both cancer and aging comorbidities. Indeed, metformin is currently being pursued as one of the first ever "anti-aging" therapeutics in clinical trials.

"The big takeaway for me is that metabolism and changes in the health of your mitochondria are critical in cancer, they're critical in diabetes, and they're critical in neurodegenerative diseases," says the senior author. "Our finding says that a diabetes drug that activates AMPK, which we previously showed can suppress cancer, may also help restore function in patients with neurodegenerative disease. That's because the general mechanisms that underpin the health of the cells in our bodies are way more integrated than anyone could have ever imagined."