Cerebellar modulation of the reward circuitry and social behavior 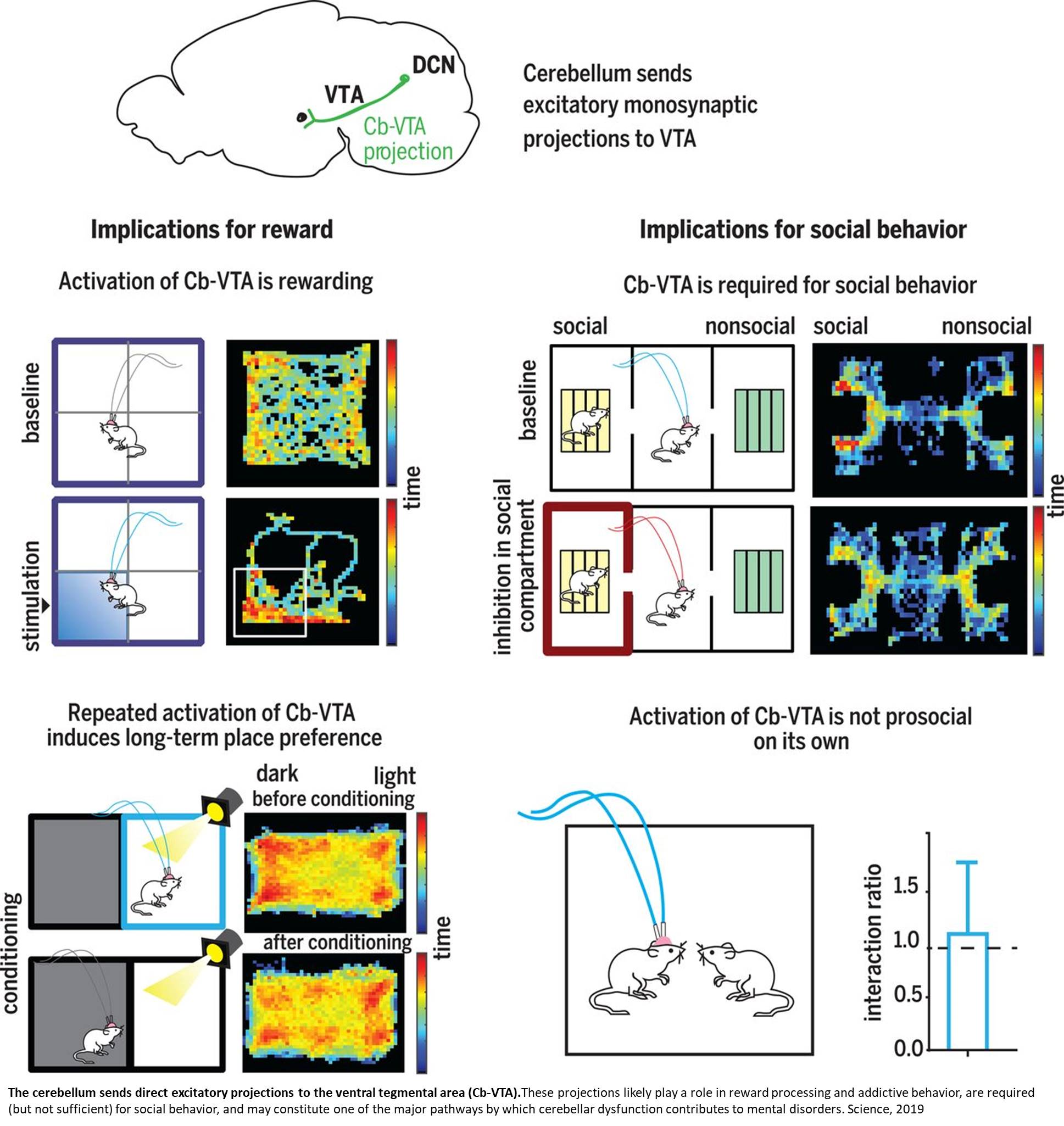 A new study in rodents has shown that the brain's cerebellum--known to play a role in motor coordination--also helps control the brain's reward circuitry. Researchers found a direct neural connection from the cerebellum to the ventral tegmental area (VTA) of the brain, which is an area long known to be involved in reward processing and encoding. These findings, published in Science, demonstrate for the first time that the brain's cerebellum plays a role in controlling reward and social preference behavior, and sheds new light on the brain circuits critical to the affective and social dysfunction seen across multiple psychiatric disorders.

The cerebellum plays a well-recognized role in the coordination and regulation of motor activity. However, research has also suggested that this brain area contributes to a host of non-motor functions. For example, abnormalities in the cerebellum have been linked to autism, schizophrenia, and substance use disorders, and brain activation in the cerebellum has been linked to motivation, social and emotional behaviors, and reward learning, each of which can be disrupted in psychiatric disorders.

These earlier findings led the researchers to wonder if there was a direct connection between the cerebellum and the VTA--a brain structure involved in controlling reward and motivational behaviors. To examine this, the researchers used a technique called optogenetics, in which the neurons of animals are genetically modified, so they can be controlled using pulses of light. The researchers used this technique in mice, activating neurons in the cerebellum which connected to the VTA. The researchers found that activating the cerebellar neurons led to increased activation in the VTA of mice, indicating a working connection between these two brain structures.

Once the neural connection between these two brain structures was confirmed, the researchers investigated whether inputs from the cerebellum to the VTA influenced reward-related and social preference behavior. The researchers placed mice in a square-shaped open chamber and used pulses of light to activate cerebellar neurons linked to the VTA whenever mice entered a specific part of the chamber, called the "reward quadrant."

Mice showed a strong preference for spending time in the reward quadrant, freely choosing to spend more than 70 percent of their time in this area. In addition, the researchers found that mice were willing to work for activation in this brain area and to spend time in conditions they would usually not prefer (light vs. darker areas) to receive this activation. Together, the findings suggest that activation of the cerebellar projections to the VTA is rewarding for mice and that the cerebellum plays a role in reward-related behaviors.

To examine whether the inputs from the cerebellum into the VTA impacted social behaviors, the researchers tested mice using a three-chamber social task in which the mice could choose to spend time in a chamber with another mouse (the social chamber), in an empty central chamber, or in a chamber containing a non-social object. At baseline, mice preferred to be in the social chamber, but after researchers inactivated the cerebellar projections into the VTA, the mice no longer showed this preference. In addition, continuous silencing of the cerebellar-VTA pathway was found to completely prevent the expression of social preference behavior in the mice, findings which indicate that inputs from the cerebellum into the VTA are necessary for social preference behavior in mice.

The results of this study suggest a potentially major--and previously unrecognized--role for the cerebellum in the creation and control of reward and social preference behaviors. Although there is much left to explore, the identification of this direct neural pathway may help explain the role of this circuit in disorders that involve reward-related and social-processing systems, such as addiction, autism, and schizophrenia, and may point to future targets for intervention and symptom management.

In future studies, the researchers plan to test whether the cerebellum-VTA pathway can be manipulated, using drugs or optogenetics, to treat addiction and prevent relapse after treatment.

"Cerebellar abnormalities are also linked to a number of other mental disorders such as schizophrenia," said the lead author. "We want to find out whether this pathway also plays a role in those disorders."