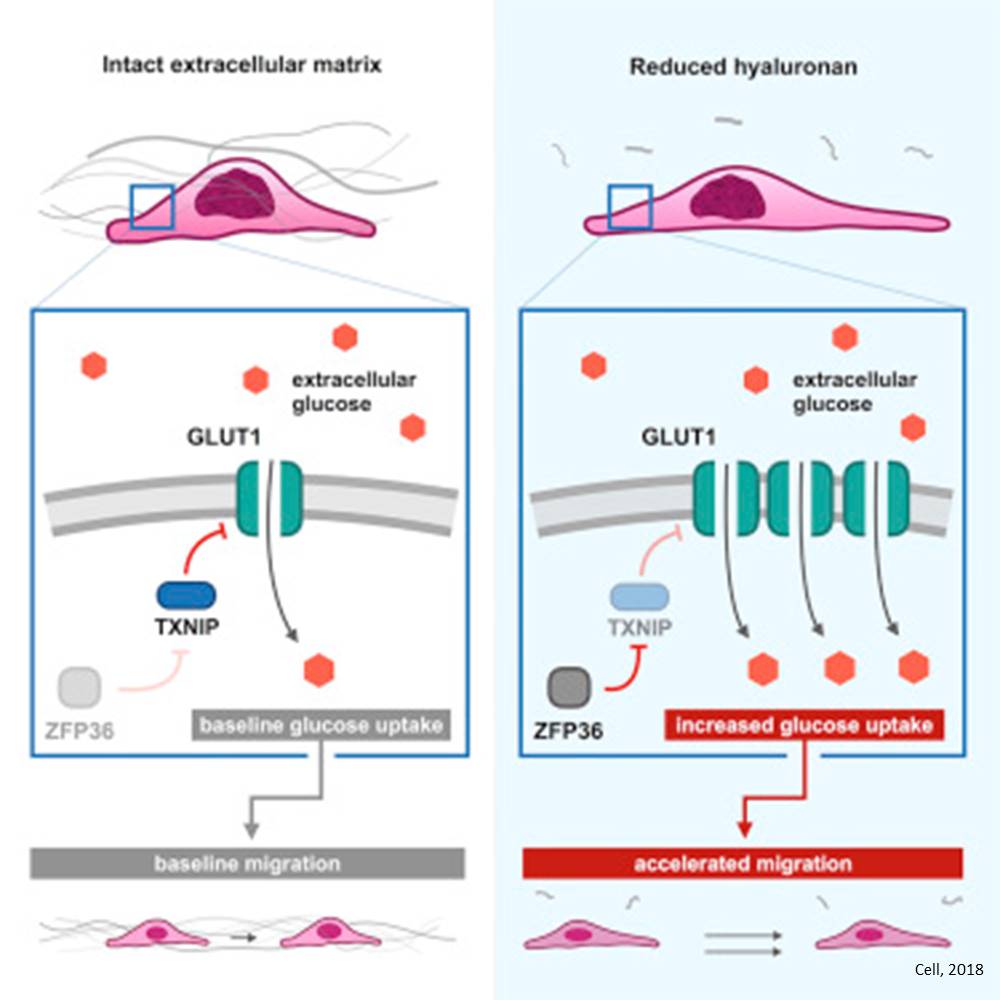 Researchers have found that the extracellular matrix, the dense network of proteins and carbohydrates that surround a cell, can influence how cells move within the body by regulating their sugar consumption. The study shows that acute changes in a single component of the extracellular matrix can trigger a very rapid change in the metabolism and migration of the cell.

Given its importance in the growth and migration in cancer cells, scientists have intensely studied how glucose metabolism can be regulated in response to a variety of both internal and external cues. But little research has focused on the relationship between metabolism and changes in specific components of the extracellular matrix, which occur both during normal development and in disease progression.

"Our study is different from past studies in that it's showing that acute changes to one component of the extracellular matrix can trigger a very rapid change in the metabolism of the cell," said the study's lead author.

While analyzing breast tumors from patients and breast cancer cell lines for genes that influence glucose metabolism, the researchers made the surprising discovery that among the genes most tightly associated with a high rate of glucose metabolism was a receptor for a core component of the extracellular matrix, hyaluronan.

Because this receptor tethers the cell to the hyaluronan in the matrix, the finding suggested that changes in the structure or composition of the extracellular matrix might affect metabolism. The researchers confirmed that hypothesis by modulating the levels of hyaluronic acid around the cells and measuring subsequent changes in their rate of glucose metabolism.

Confirming a mechanistic link between the ECM component hyaluronan and metabolism, treatment of cells and xenografts with hyaluronidase triggers a robust increase in glycolysis. This is largely achieved through rapid receptor tyrosine kinase-mediated induction of the mRNA decay factor ZFP36, which targets TXNIP transcripts for degradation.

Because TXNIP promotes internalization of the glucose transporter GLUT1, its acute decline enriches GLUT1 at the plasma membrane. Functionally, induction of glycolysis by hyaluronidase is required for concomitant acceleration of cell migration.

The study suggests that scientists might be able to create new treatments for cancer that work by targeting tumors in a way that undercuts the cells' ability to metabolize sugar. Instead of therapies working by directly targeting the cell, it may be possible to alter tumor metabolism by targeting the extracellular matrix.

The finding could lead to a new understanding of many diseases, and might particularly shed new light on how cancer spreads. It suggests that differences in nutrient consumption among the cancer cells within a single tumor mass may align with differences in their tendency to migrate. Those cells with a higher rate of glucose metabolism may be able to fuel the migration to other parts of the body, or metastasis.

"This is really a new paradigm for metabolic regulation," said the author. "One of the most significant aspects of these findings is it seems like cells can respond to discrete changes in the matrix by coordinating a metabolic response with a behavioral response. So the increased glucose metabolism that we observe happens when you acutely change the matrix actually fuels the increased migration."