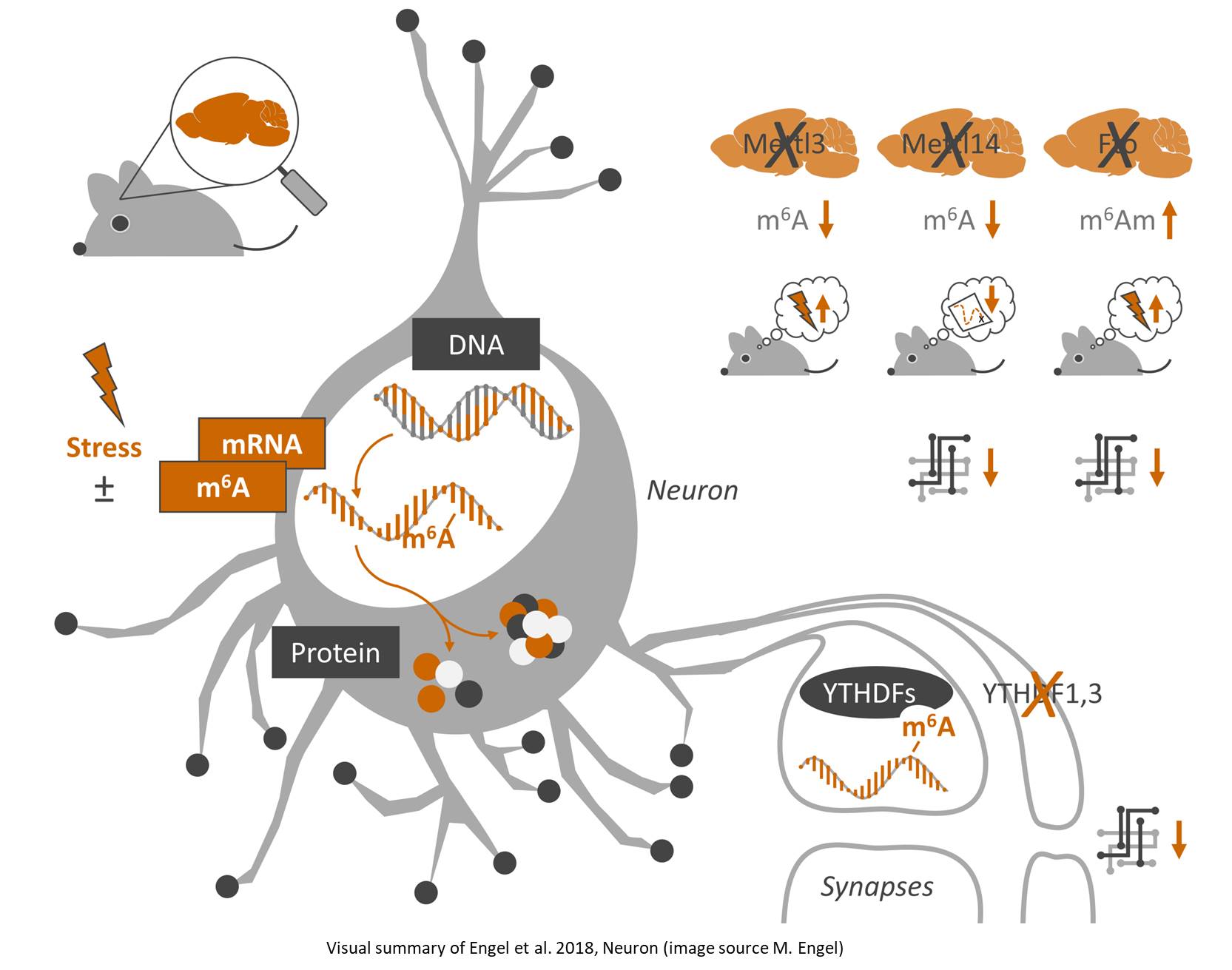 RNA carries pieces of instructions encoded in DNA to coordinate the production of proteins that will carry out the work to be done in a cell. But the process isn't always straightforward. Chemical modifications to DNA or RNA can alter the way genes are expressed without changing the actual genetic sequences. These epigenetic or epitranscriptome changes can affect many biological processes such as immune system response, nervous system development, various human cancers and even obesity.

The most common modification on messenger RNA in mammals is called N6-methyladenosine (m6A). It is widespread in the nervous system. It helps coordinate several neural functions, working through reader proteins in the YTH family of proteins.

In a new study published in Nature, scientists show how Ythdf1, a member of the YTH family that specifically recognizes m6A, plays an important role in the process of learning and memory formation. Using CRISPR/Cas9 gene editing tools to knock out Ythdf1in mice, they demonstrated how it promotes translation of m6A-modified messenger RNA (mRNA) in response to learning activities and direct nerve cell stimulus.

"This study opens the door to our future understanding of learning and memory," said one of the senior authors of the study. "We saw differences in long-term memory and learning between the normal and knockout mice, demonstrating that the m6A methylation plays a critical role through Ythdf1."

Mice express more Ythdf1 mRNAs in the hippocampus, part of the brain crucial to spatial learning and memory. So, the researchers conducted several experiments with both normal mice and mice without Ythdf1 to test the effects on their ability to learn from experiences.

In one scenario called the Morris water maze to test spatial memory, they used a water tank with a submerged platform a mouse could stand on to avoid swimming. Mice got several tries to learn where the platforms were located based on visual cues in a testing room. Then the platform was removed. The normal mice did a better job remembering where the platform used to be than the knockout mice.

The researchers also tested contextual and auditory fear memory in the different groups of mice by administering electrical shocks in combination with certain sounds in specific settings. Again, the normal mice demonstrated better contextual memory than knockout mice. They showed a fear response after being placed in the same setting again without the associated sounds, but not after hearing the sounds in a different setting.

The researchers also tested the response of cultured mouse neurons directly in the lab. When the normal cells were stimulated, they increased new protein production, compared to much less activity in Ythdf1 knockout cells.

"It's really an exciting finding to show how the protein can respond to a neuronal stimulus which could contribute to controlled translation,"the senior author said.

"It's a stimulation-dependent upregulation of translation," the senior author added. "It makes sense because you don't want to fire up your neurons constantly, only when you have a stimulation."
While the current study identifies one important function for YTHDF1, there may be many other functions involved with other biological processes.

"This is not just limited to learning and memory. This stimulation induced translation should apply to many other systems," the senior author said. "The same m6A modification is known to play a role in the immune system when there is an infection, or when a cell moves to a different part of the body. So, I think this is a general concept."