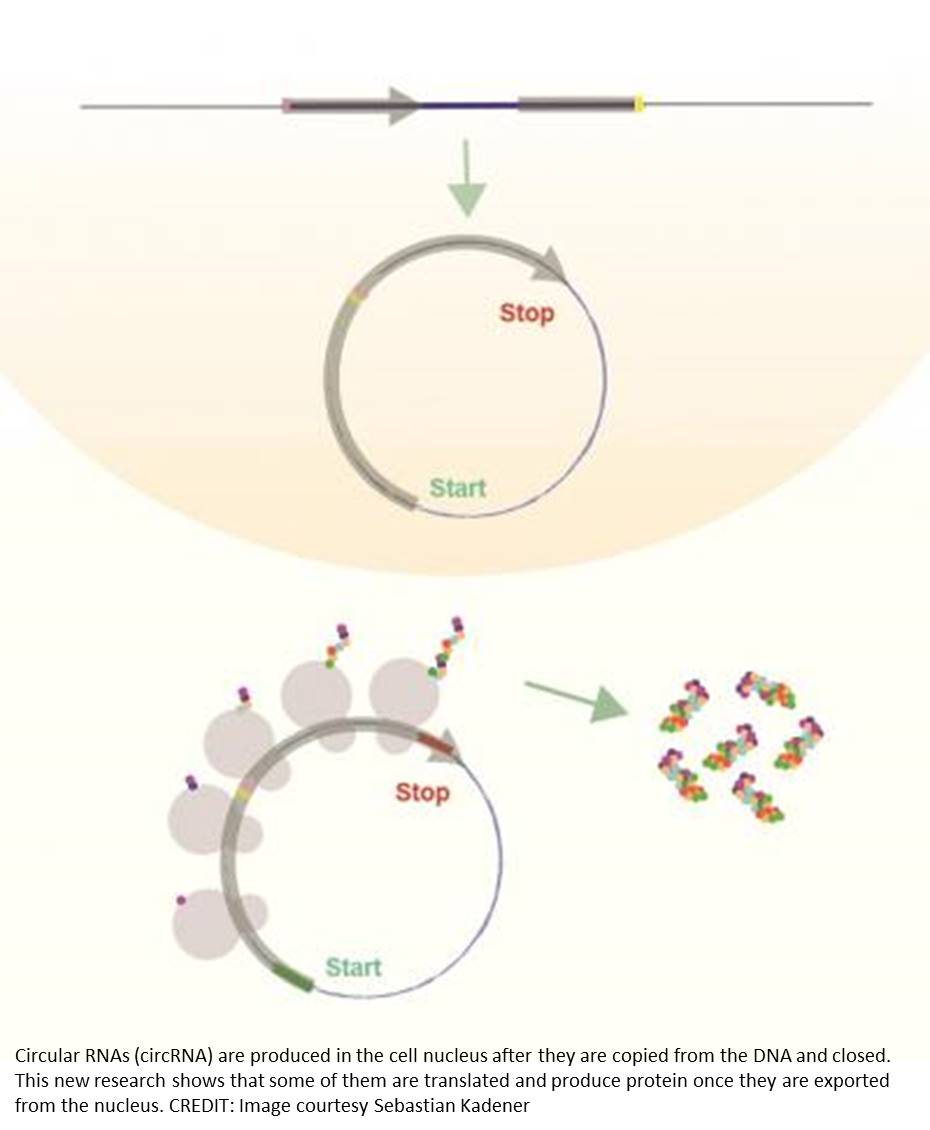 Scientists have discovered a protein-encoding function for circular RNA. This kind of RNA molecule is highly active in brain cells and could play an important role in neurodegenerative diseases.

Several years ago, scientists discovered a new type of RNA molecule. Unlike all other known RNAs, this molecule forms a closed loop, and was therefore labeled circular RNA (circRNAs). Although circRNA molecules are abundant - in particular in the brain where they accumulate as we age - little is known about their function. In contrast to messenger RNAs (mRNAs), which are generated from genes and have the information to make proteins, circRNAs were previously thought to perform other duties in the cells.

Now, in an article published in the journal Molecular Cell, researcehrs have demonstrated that circRNAs can encode for proteins.

This discovery reveals an unexplored layer of gene activity in a type of molecule not previously thought to produce proteins. It also reveals the existence of a new universe of proteins not yet characterized.

To determine whether circRNAs are translated, the researchers used Drosophila (fruit flies) and developed or adapted various techniques from molecular biology, computational biochemistry and neurobiology. They showed that specific circRNAs molecules are bound to ribosomes, the machinery that makes proteins, and they were able to find proteins produced from these molecules.

They also found that translated circRNAs are associated with specific places in the cells, in particular synapses, the junctions where electrical impulses pass from one nerve cell to another nerve or muscle cell. Indeed, the proteins produced from these circRNAs are present in synapses and are translated in response to specific signals, e.g. when the flies did not have access to food for 12 hours.

This suggests that communication between neurons might involve unknown and uncharacterized mechanisms. Moreover, starvation and other pathways that induce the translation of circRNAs are also involved in aging, suggesting a strong link between circRNA translation and aging and a possible role for these molecules in neurodegenerative diseases.

As circRNAs are extremely stable, they potentially could be stored for a long time in compartments more distant to the cell's body like axons of neuron cells. There, the RNA molecules could serve as a reservoir for proteins being produced at a given time.

According to the senior author, "By identifying the function of circRNAs, this research helps advance our understanding of molecular biology, and can be helpful in understanding aging or neurodegenerative diseases."

Another author, added: "We think that translation of circRNAs is very interesting and that its prevalence and importance must be further investigated."

Among the circRNAs that the researchers showed to be translated is circMbl, which is generated from the muscleblind gene. Importantly, defects in muscleblind function are known to cause a severe degenerative disease called myotonic dystrophy. Characterized by progressive muscle wasting and weakness, this is the most common form of muscular dystrophy that begins in adulthood.

Considered together, the role played by muscleblind in regulating circRNAs, combined with these molecules' abundance and translation in the brain, suggests that circRNAs might be involved in development of myotonic dystrophy.

Now, the researchers would like to explore how important circRNA translation is for normal brain function and whether circRNAs are involved in aging and age-related disorders. They would also like to analyze the mechanism of translation of circRNAs. This might teach us more generally about translation as a central process in the cell.