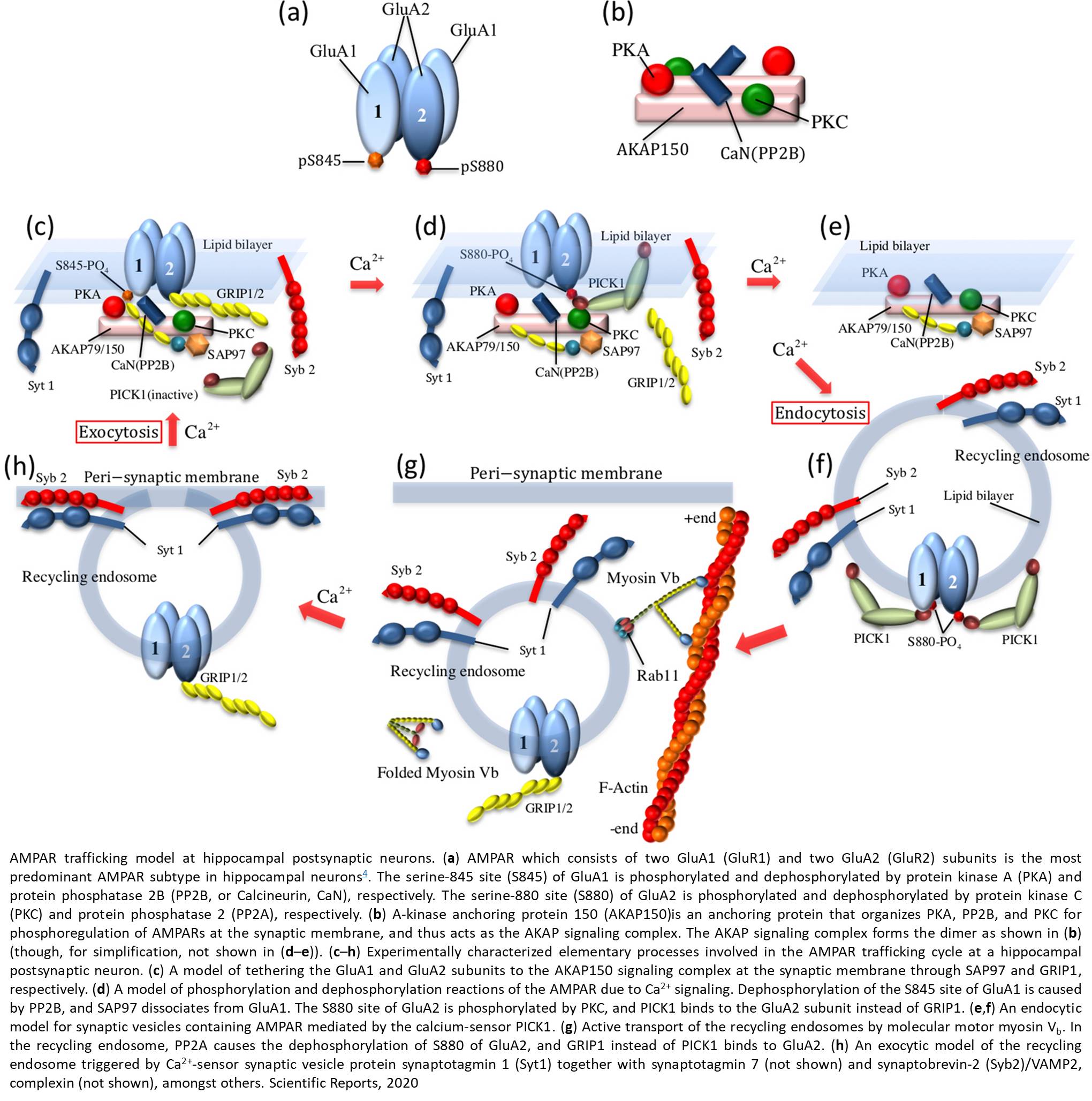 The long-term potentiation (LTP) and long-term depression (LTD) of the strength of hippocampal excitatory synapse involved in learning and memory formation in brain have been separately explained, but the molecular mechanism that comprehensively explains them has not been elucidated.

The researchers focused on the competition of exocytosis and endocytosis of AMPA-type glutamate receptors dependent on the number of calcium ions that flow into the postsynapse of hippocampal excitatory neurons, and demonstrated the comprehensive understanding of the LTP and LTD by a large-scale mathematical model simulation.

N-methyl-D-aspartate (NMDA)-type glutamate receptor (NMDAR)-dependent long-term potentiation (LTP) and long-term depression (LTD) in synapses on hippocampal excitatory neurons are considered to be a molecular basis essential to form neural circuits involved in learning and memory. In mammalians, it is confirmed that the main factor of the induction of LTP and LTD results in an increase and decrease in α-amino-3-hydroxy-5-methyl-4-isoxazolepropionic acid (AMPA)-type receptor (AMPAR) at the postsynaptic membrane depending on the calcium ion volume. However, the mechanism on the varying number of the AMPAR has not been elucidated. In addition, there are disputes on the main pathway for AMPAR trafficking to the postsynaptic membrane.

Currently, it is still unknown which pathway for AMPAR trafficking is the main one, but as these disputes are basically involved in the induction of LTP, it has been considered desirable to be able to explain the pathway including the induction of LTD without inconsistency.

The authors modeled the following 4 processes involving "active" transport of recycling endosomes of AMPAR by molecular motor myosin Vb as pathway for AMPAR trafficking to the postsynaptic membrane in order to comprehensively explain the LTP/LTD.

* Endocytosis of AMPAR to the cytoplasm by a calcium-binding protein, PICK1

* AMPAR uptake at around postsynaptic membranes by Syt1/7-dependent exocytosis

They performed a simulation using a postsynaptic model based on these processes and succeeded in reproducing the time course of the number of AMPAR corresponding to the induction of LTD and LTD observed in the experiment. They also showed the qualitative reproducibility of the results reported such as impaired LTP induction due to interference of Myosin Vb transport, impaired LTD induction due to decreased rate of reaction of PP2B-dependent dephosphorylation of AMPAR, impaired LTP and LTD inductions due to PICK1 expression level, and impaired LTP induction in Syt1 calcium-binding domain mutant, demonstrating the validity of the model. The conclusions drawn from this simulation are as follows.

1. The LTP (or LTD) expression is caused by a phenomenon that the exocytosis triggered by the activation of Syt1/7 becomes more predominant (or inferior) than the endocytosis triggered by PICK1 activation, resulting in an increase (or decrease) in the number of AMPAR at the postsynaptic membrane.
2. The difference in calcium-dependent activation between the calcium sensors, PICK1 and Syt1, is resulted by the difference in these calcium-binding constants.
3. Myosin Vb carries the recycling endosomes containing AMPAR toward around the postsynaptic membrane by stationary ATP driven transport not dependent on calcium concentration.
4. As a result, the recycling endosomes are ready on the membranes so that they can immediately address the next Syt1-dependent exocytosis, enabling the rapid LTP induction.
5. AMPARs taken up to around the postsynaptic membrane due to exocytosis are immediately reallocated to the synapse membrane by the lateral diffusion.

The neural network model mimicking the higher brain function can learn changes of synapse coupling coefficient, and Hebbian rule is known as a most basic learning rule. The Hebbian rule and its extended/modified versions are currently used as learning rules, which are known to be closely related to NMDAR-dependent LTP. The achievement of this study provides a molecular basis for the Hebbian rule or changes of synapse binding, which is expected to be a hint to understand the high brain function from the molecular level. Secretion of Tau via an Unconventional Non-vesicular Mechanism