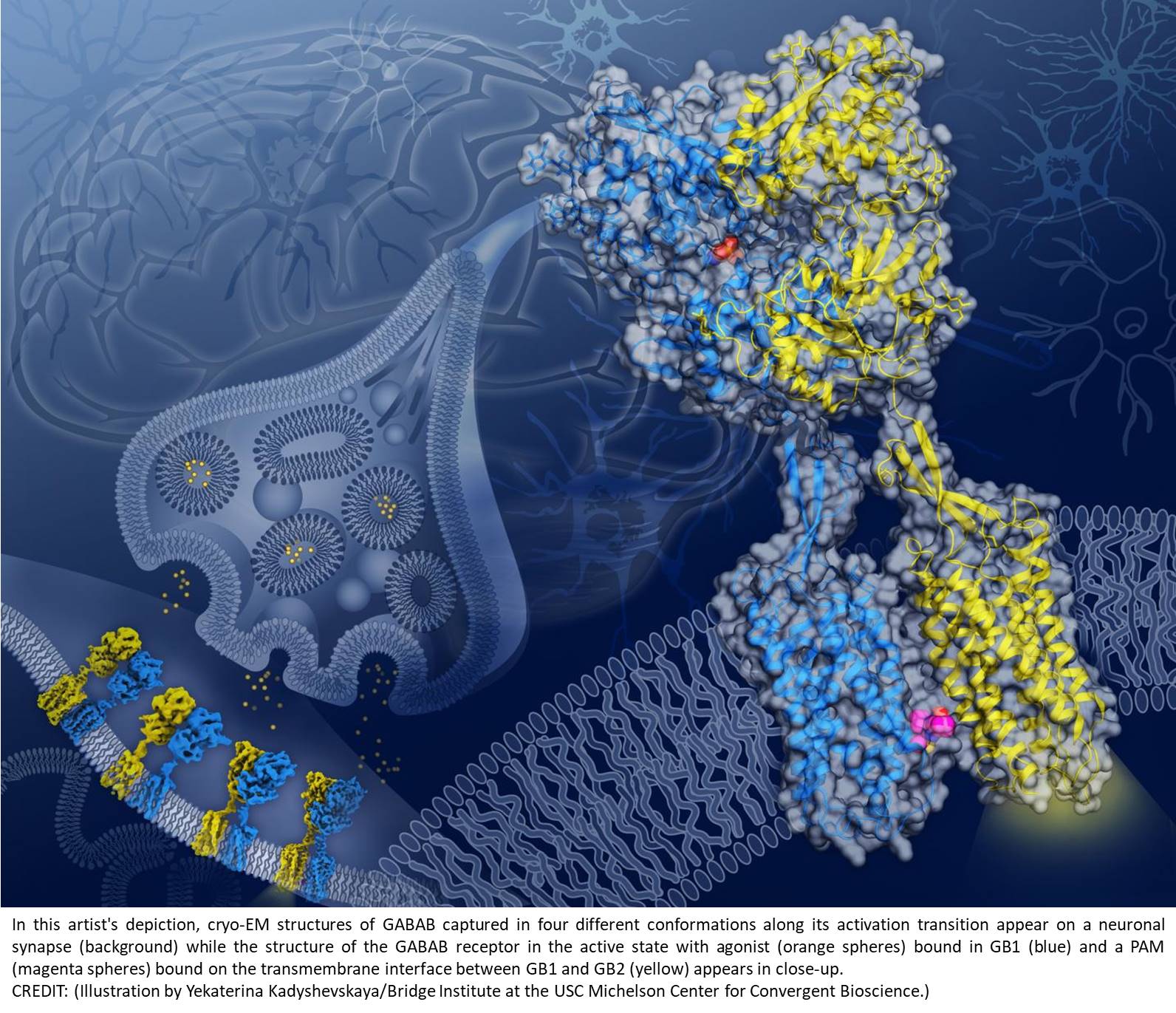 As the body goes about its daily business, molecules called neurotransmitters control the level of electrical activity within the brain. Interacting with protein receptors nestled in the membrane that makes up the outer border of a neuron, neurotransmitters open and close portals that control the flow of ions in and out of the cell.

Gamma-aminobutyric acid, or GABA, dominates as one of the most important inhibitory neurotransmitters in the brain. Its primary role is to calm brain activity, lowering the number of signals firing in the brain in balance with the activity of other neurotransmitters that ramp up brain activity. (It's even sold as a nutritional supplement to promote calm and improve sleep.)

When GABA is unable to inhibit brain signaling, the imbalance in activity can lead to a number of health issues including anxiety or mood disorders, increased pain, muscle spasms and, in extreme cases, even epilepsy.

In a study published in Nature scientists figured out how GABA interacts with a key protein receptor called GABAB.The study paints a clear picture of how GABA changes the shape of GABAB and reveal a clear target for new drugs.

The researchers used cryo-electron microscopy, or cryo-EM, to capture never-before-seen detailed snapshots of the GABAB receptor protein twisting and contorting as it interacts with GABA.

The GABAB receptor protein rests across the cellular membrane of neurons and is composed of two subunits with similar shapes: GB1, which recognizes GABA, and GB2, which relays the signal from GB1 into the cell's interior.

The cryo-EM images provide blueprints of how, as GABA interacts with GB1, a ripple effect moves through the entire protein until a cavity opens in the part of GB2 that faces inside the cell. Once revealed, this cavity in GB2 can interact with and activate proteins within the cell that control the neuron's activity.

The three-dimensional structural images offer promise for improved therapies for neurological disorders, according to a corresponding author on the study. "These blueprints can be used to design new therapeutic drugs that could affect different conformational states and thus act more precisely."

Equally important if not more so, the images also reveal a critical location on the GABAB receptor protein, where GB1 and GB2 meet within the cell membrane when the receptor is activated. Previously unknown, this GB1-GB2 interface is a prime target for a type of drug called a PAM (short for positive allosteric modulator).

PAMs offer promise for the development of new therapeutic drugs because they don't replace the action of naturally occurring molecules such as GABA but rather fine-tune how the receptor behaves, leading to fewer side-effects, the author said.

"There are many therapeutic areas in which targeting the GABAB receptor protein could be beneficial; however, such direct interventions may come with significant side-effects," the author said. "Developments of PAMs facilitated by our structure images could lead to a new generation of safer drugs targeting this receptor."