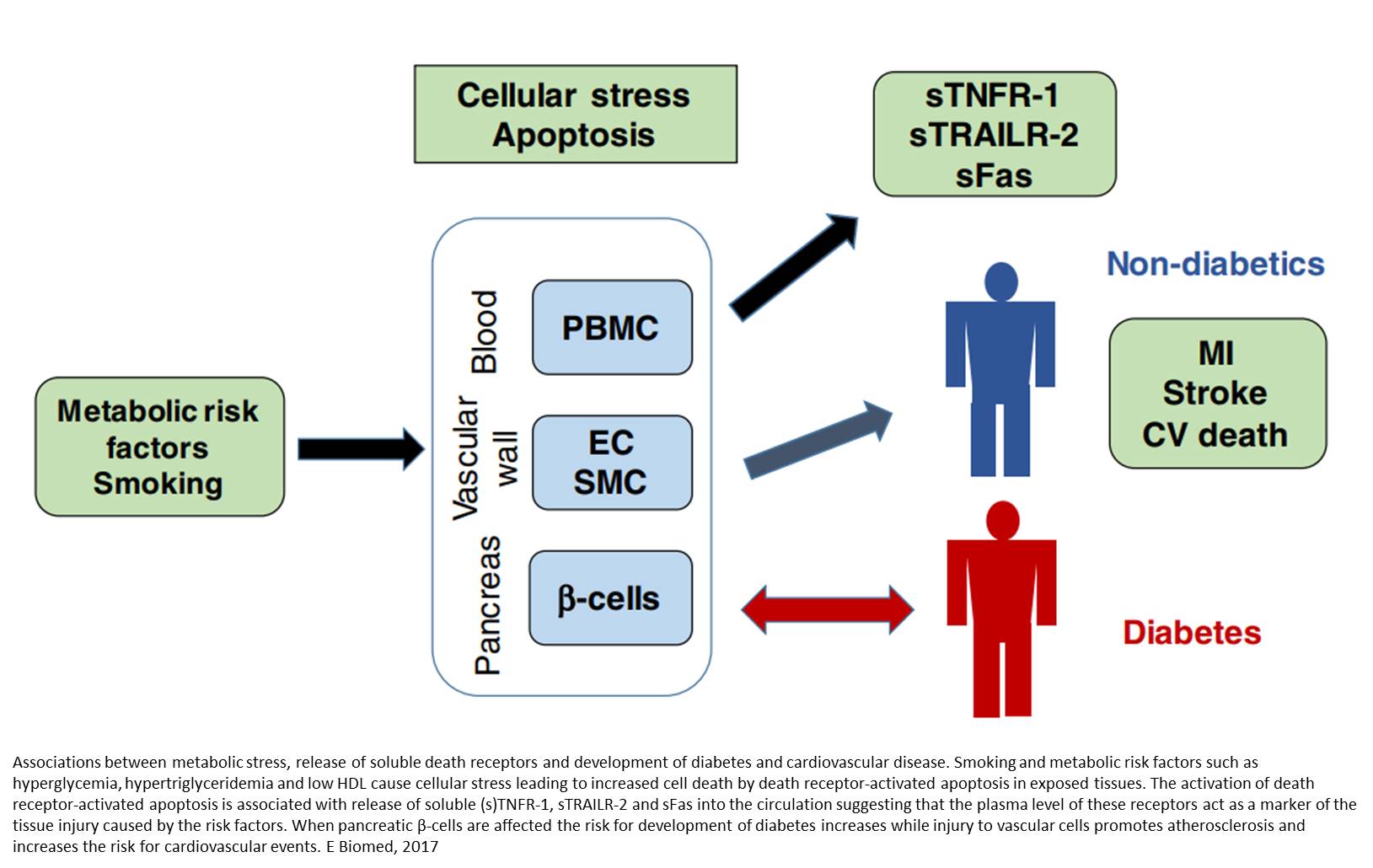 Researchers have found that the presence of death receptors in the blood can be used to directly measure the risk of developing cardiovascular diseases and type 2 diabetes. "We see that people with known risk factors such as high blood sugar and high blood fats also have heightened death receptor levels", says the study lead.

Death receptors are activated, for example, in the case of infections when white blood cells that have combatted a virus are to be removed. It was previously known that death receptors in the blood can be measured, but not whether an elevated level was linked to increased cell death in type 2 diabetes and arteriosclerosis.

The aim of the study was therefore to investigate whether "death receptors" could be used as a marker that could be linked to ongoing tissue damage and if this could be used to predict the risk of developing cardiovascular diseases and type 2 diabetes.

High blood sugar and blood fats (low levels of HDL, "the good cholesterol") subject the body's blood vessels and insulin-producing beta cells to stress. Long-term stress damages the cells and can cause the death receptors on the surface of the cell to trigger a cell suicide program within the cell.

"When the beta cells are damaged, the production of insulin decreases, which increases the risk of diabetes. The damage activates repair processes in the blood vessels. If these are not properly resolved, this usually leads to the development of plaque in the blood vessels (arteriosclerosis). The formation of cracks in this plaque is the primary cause of myocardial infarction and stroke", says the study lead.

The study also looked at the connections between different risk factors - age, BMI, blood fats, blood sugar and blood pressure - and the death receptors TNFR-1, TRAILR-2 and Fas in blood samples from 4 742 people who are part of the population study Malmö Diet Cancer.

Samples from the 1990s were compared with the risk of suffering from diabetes, heart attack and stroke in the coming 20 years.

The conclusion is that the presence of death receptors in the blood could be used as a measurement of ongoing tissue damage and to predict the risk of developing type 2 diabetes and cardiovascular disease.

"This indicates that we could at an early stage get an idea of whether treatment of risk factors reduces damage to beta cells and blood vessel walls by monitoring the death receptors in the blood", says the study lead.