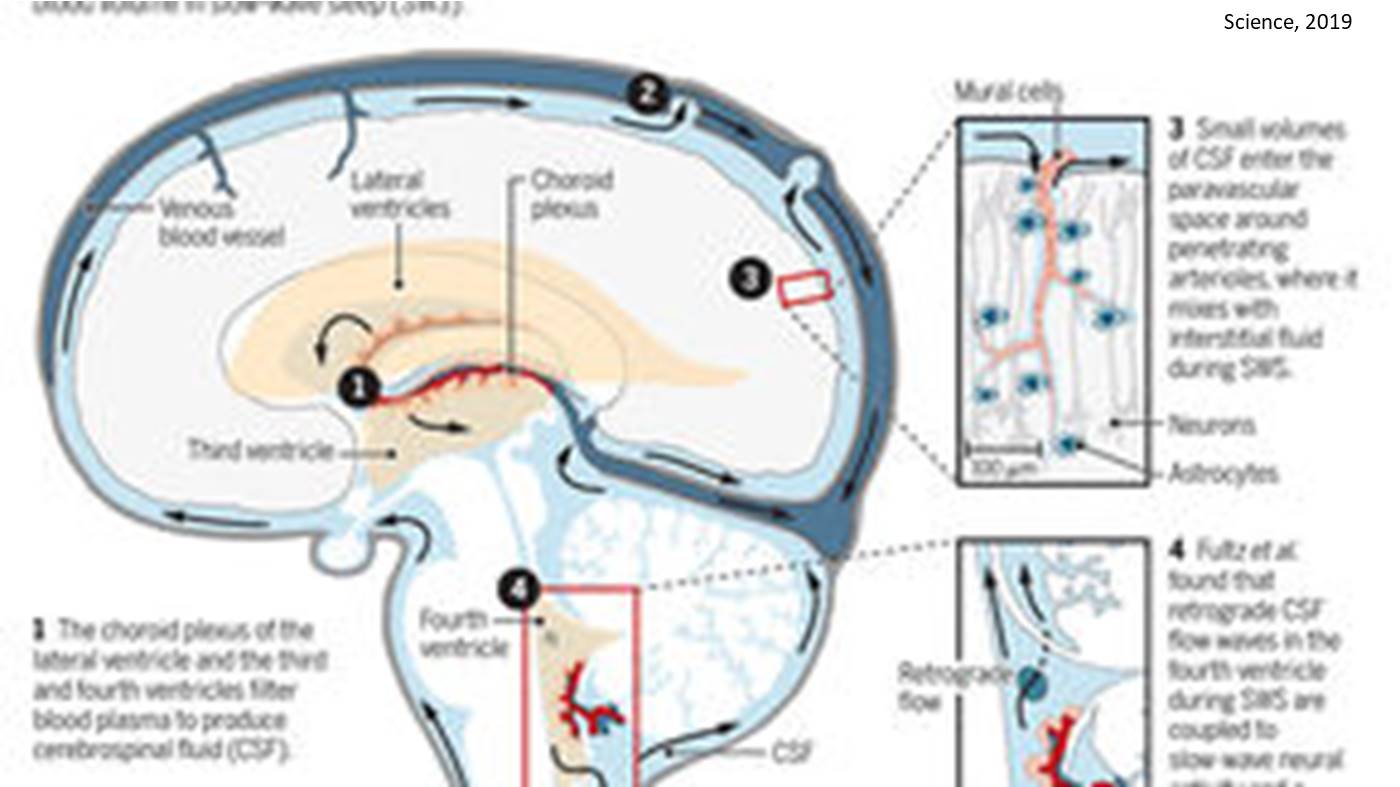 New research suggests that tonight while you sleep, something amazing will happen within your brain. Your neurons will go quiet. A few seconds later, blood will flow out of your head. Then, a watery liquid called cerebrospinal fluid (CSF) will flow in, washing through your brain in rhythmic, pulsing waves.

The study, published in Science, is the first to illustrate that the brain's CSF pulses during sleep, and that these motions are closely tied with brain wave activity and blood flow.

"We've known for a while that there are these electrical waves of activity in the neurons," says study coauthor. "But before now, we didn't realize that there are actually waves in the CSF, too."

This research may also be the first-ever study to take images of CSF during sleep. And the author hopes that it will one day lead to insights about a variety of neurological and psychological disorders that are frequently associated with disrupted sleep patterns, including autism and Alzheimer's disease.

The coupling of brain waves with the flow of blood and CSF could provide insights about normal age-related impairments as well. Earlier studies have suggested that CSF flow and slow-wave activity both help flush toxic, memory-impairing proteins from the brain. As people age, their brains often generate fewer slow waves. In turn, this could affect the blood flow in the brain and reduce the pulsing of CSF during sleep, leading to a buildup of toxic proteins and a decline in memory abilities. Although researchers have tended to evaluate these processes separately, it now appears that they are very closely linked.

To further explore how aging might affect sleep's flow of blood and CSF in the brain, the team plan to recruit older adults for their next study, as the 13 subjects in the current study were all between the ages of 23 and 33. The author says they also hope to come up with a more sleep-conducive method of imaging CSF. Wearing EEG caps to measure their brain waves, these initial 13 subjects were tasked with dozing off inside an extremely noisy MRI machine, which, as anyone who has had an MRI can imagine, is no easy feat.

"We have so many people who are really excited to participate because they want to get paid to sleep," the author says with a laugh. "But it turns out that their job is actually--secretly--almost the hardest part of our study. We have all this fancy equipment and complicated technologies, and often a big problem is that people can't fall asleep because they're in a really loud metal tube, and it's just a weird environment."

But for now, the author is glad to have the opportunity to take images of CSF at all. One of the most fascinating yields of this research is that they can tell if a person is sleeping simply by examining a little bit of CSF on a brain scan.

"It's such a dramatic effect," the author says. "[CSF pulsing during sleep] was something we didn't know happened at all, and now we can just glance at one brain region and immediately have a readout of the brain state someone's in."

As their research continues to move forward, the team has another puzzle they want to solve: How exactly are our brain waves, blood flow, and CSF coordinating so perfectly with one another? "We do see that the neural change always seems to happen first, and then it's followed by a flow of blood out of the head, and then a wave of CSF into the head," says the author.

One explanation may be that when the neurons shut off, they don't require as much oxygen, so blood leaves the area. As the blood leaves, pressure in the brain drops, and CSF quickly flows in to maintain pressure at a safe level.

"But that's just one possibility," the author says. "What are the causal links? Is one of these processes causing the others? Or is there some hidden force that is driving all of them?"