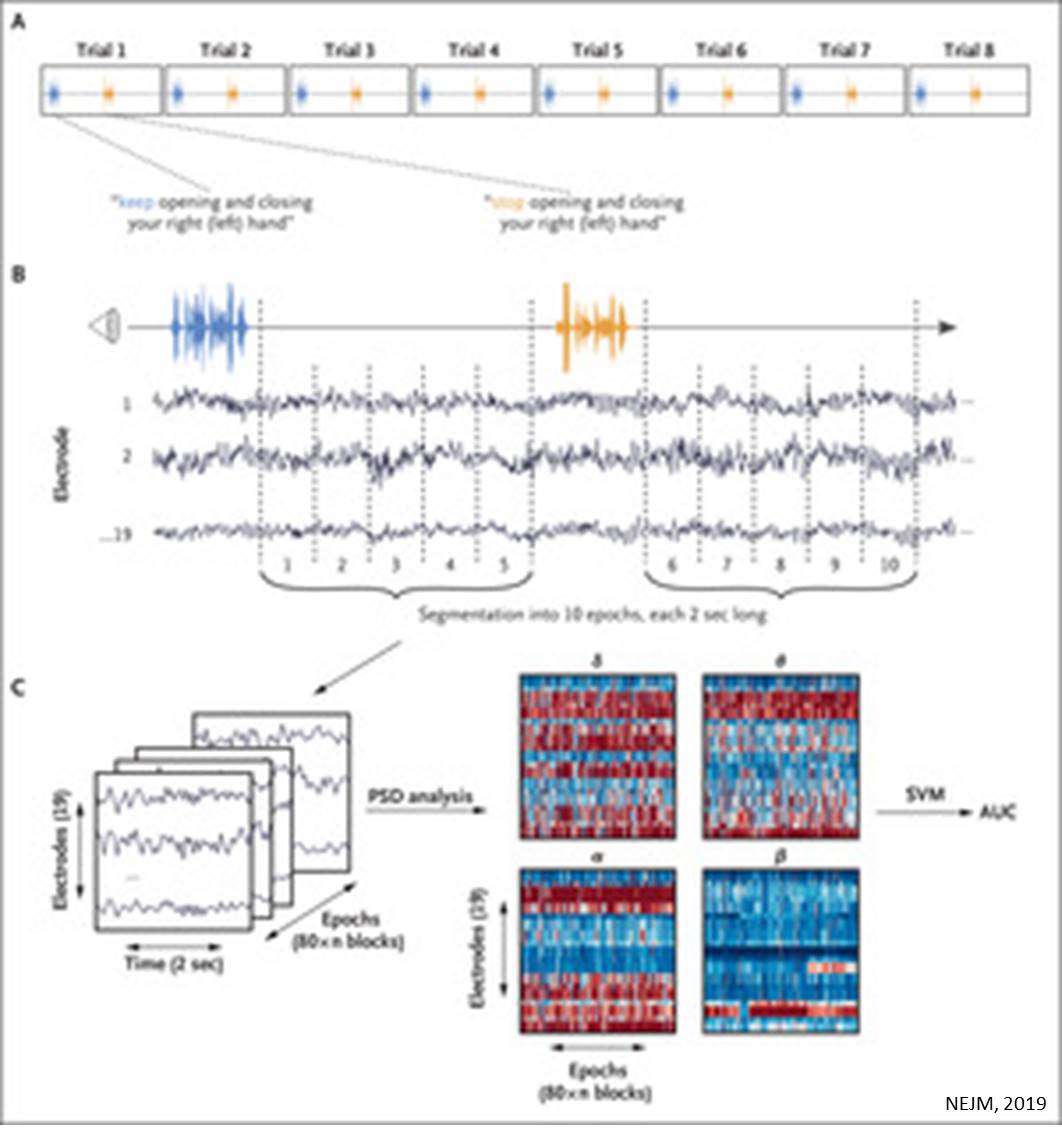 Close analysis of EEG data reveals that nearly 1 in 7 brain-injured ICU patients shows evidence of hidden consciousness just days after injury. Patients with such signs are more likely to recover, neurologists have found.

In the study, the researchers used a machine learning technique to analyze standard EEG data collected from 104 unresponsive patients to look for patient-specific brain activity indicating that they could understand instructions to move their hands. If the findings are confirmed in larger studies, the technique could help physicians better predict which patients will likely regain consciousness.

"Though our study was small, it suggests that EEG--a tool that's readily available at the patient's bedside in the ICU in almost any hospital across the globe--has the potential to completely change how we manage patients with acute brain injury," says the lead author of the study.  The findings were published in the New England Journal of Medicine.

Currently, there's no perfect way to accurately predict the chance of recovery for all unconscious, brain-injured patients.

Electroencephalography (EEG) is commonly used in intensive care to monitor critically ill patients at risk for seizures, and may be a relatively easy and fast way to identify signs of hidden consciousness in unresponsive patients who've recently experienced brain injury.

Difficult discussions between families and health care providers determine the intensity of medical support, and the decision to withdraw life-sustaining therapies from patients who appear to have little chance to recover are frequently made within the first weeks following brain injury.

Clinicians use bedside neurological examinations, imaging and electrophysiological studies, and laboratory values to estimate the likelihood of recovery for people who are unresponsive in the days and weeks after sustaining a brain injury. However, these predictions are frequently inaccurate.

Increasingly, however, studies suggest that some unresponsive patients may have hidden cognitive abilities, and that delayed recovery is more common than previously thought.

"One of the most challenging problems in the ICU involves predicting recovery, and not just survival, for patients who are unconscious after a brain injury," says the lead. "Since the first studies describing hidden consciousness, we've been looking for a practical way to do this in the early days after brain injury, when treatment decisions that affect outcomes are often made."

The team studied 104 adult patients in an intensive care unit who had recently sustained a sudden brain injury due to hemorrhage, trauma, or oxygen deprivation. Though none of the patients were paralyzed, they were unable to talk and did not respond to commands to move (e.g., make a fist or wiggle their toes).

Every day, in addition to standard neurological exams, the patients were asked multiple times to open and close their hands or stop opening and closing their hands. A complex algorithm was used to analyze EEG data from these sessions to look for signs that a patient detected a difference between the commands. A reproducibly different pattern of activity between the commands suggested that a patient was able to understand the command but could not perform the movement.

The researchers followed up with patients who were discharged from the hospital a year later.

Within 4 days of the injury, 15% of the still-unresponsive patients had brain activity patterns suggesting hidden consciousness on at least one EEG recording. Among the patients with these patterns, 50% improved and were able to follow verbal commands before being discharged from the hospital, versus 26% of those without such brain activity.

A year later, 44% of patients with the brain activity patterns were able to function independently for up to 8 hours each day, compared with only 14% of those without such signals. Approximately one-third of patients in each group--those with early EEG evidence of hidden consciousness and those without--died.

Hidden consciousness signals were also more common in patients with brain injuries from hemorrhage and trauma than from oxygen deprivation. However, the study lacked sufficient statistical power to determine the predictive value of EEG analysis across different causes of brain injury.

"This study shows that some patients who are unresponsive for days or longer may have cognitive processing capabilities sufficient to distinguish commands, and those patients have a higher chance of recovering," says the lead.

Bigger studies--especially in patients with a single cause of brain injury--are needed to determine the utility of EEG monitoring in predicting patient outcomes.

There are some technical challenges with EEG monitoring: neurological exams must be performed at least once or twice a day as consciousness fluctuates after a brain injury; spoken commands must be highly synchronized with EEG recordings; and additional computers are needed to do the analysis.

"It's important to begin monitoring with EEG as early as possible, and to assess at several time points as recovery after a severe brain injury is a complex process," the author says.

Most importantly, these assessments have to be designed meticulously because artifacts may be misinterpreted as brain activation if the testing paradigm is poorly designed or the computational analysis is applied incorrectly.