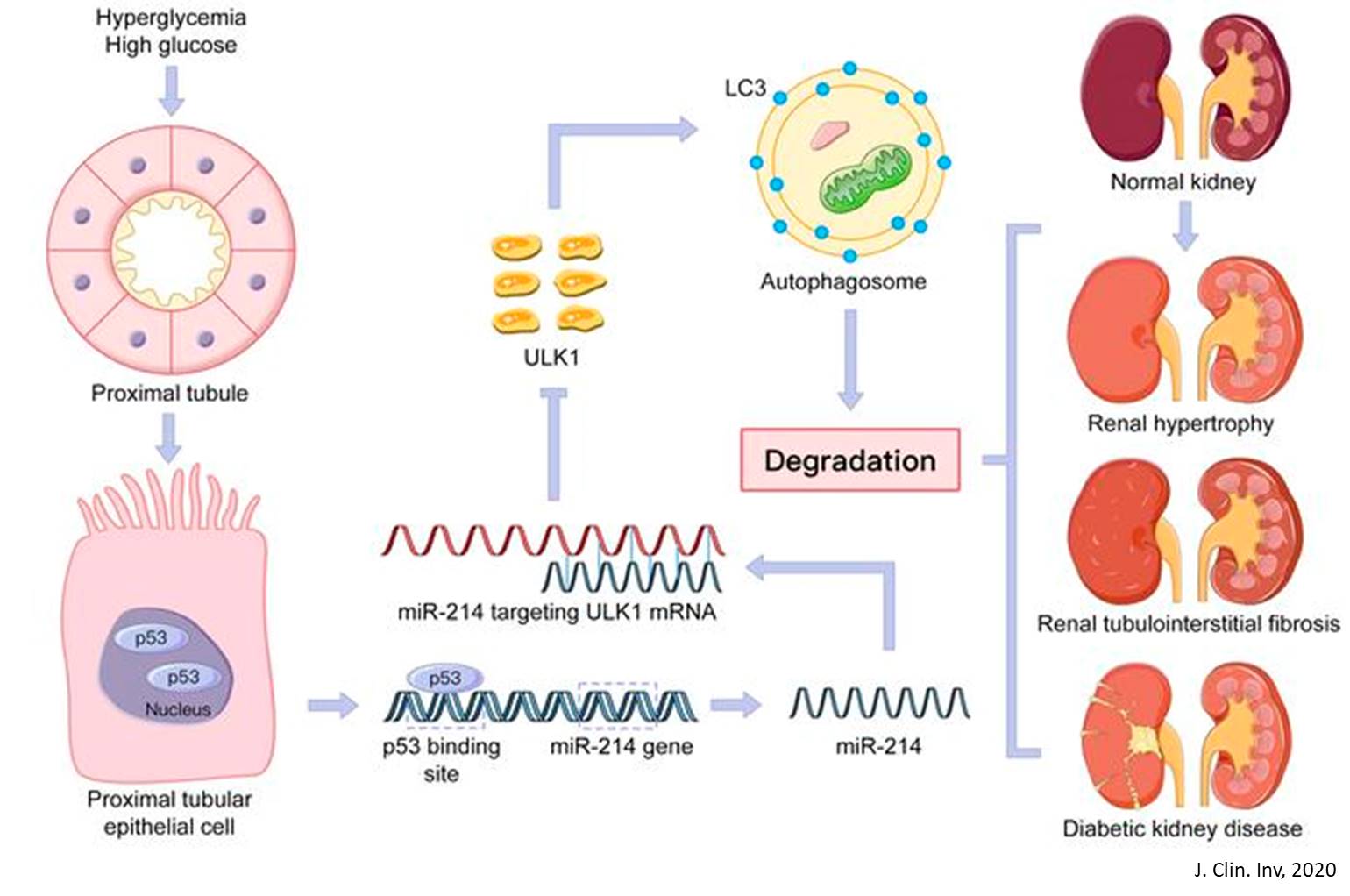 The kidneys often become bulky and dysfunctional in diabetes, and now scientists have found that one path to this damage dramatically reduces the kidney's ability to clean up after itself.

The natural cleanup is called autophagy, which literally means "self-eating," and it's a constant throughout our bodies as debris, like misfolded proteins and damaged cell powerhouses called mitochondria, get packaged into a double-membrane sack, then destroyed by enzymes to help keep cells and organs functioning at a premium.

Autophagy tends to increase in the face of disease challenges like diabetes, but the scientists have found a pathway that then quickly decreases autophagy in both animal models and humans with varying stages of this chronic condition, leaving the kidneys more vulnerable, the authors report in the Journal of Clinical Investigation.

"This is the first time we understand there is a novel pathway that leads to autophagy's dysfunction in a chronic kidney disease condition like diabetes," says the senior author.

"I think it also suggests that we have a targeted pathway to prevent or slow progression of kidney failure," says the study's corresponding author.

Scientists studying the hazardous intersection of diabetes and the kidneys were giving conflicting reports on the state of autophagy: Some saying it went up, others finding it went down. The authors in this study have now found both were correct.

They found autophagy levels naturally, initially increase in response to the stress of diabetes, but quickly drop off as a protein best known as a tumor suppressor activates a microRNA not normally involved in regulating autophagy. What follows is unhealthy overgrowth -- of individual cells and the organ -- called hypertrophy, scarring, inflammation and protein spilling into the urine, a classic sign the kidneys are failing.

"This helps us not just understand the phenomenon -- that there is initial activation, then it comes down -- but we understand what actually causes that down-regulation in a disease state," the senior author says.

The known tumor suppressor is p53, the microRNA is miR-214 and the autophagy gene this pair conspires to suppress is ULK1, one of the first genes found to regulate this important metabolic function.

To measure the impact of this path on autophagy, they used levels of the protein LC3, found in the membranes of those sacks where cell parts gets piled for elimination, which is considered a reliable biomarker of autophagy levels.

They consistently found, in both animals and humans, higher activity of p53 and miR-214 and lower ULK1 and autophagy over a relatively short period of time.

In a mouse model of type 1 diabetes, for example, at age nine weeks there was no difference in the autophagy biomarker compared to healthy controls. Two weeks later the biomarker was somewhat lower in the diabetic mice, and by age 11 weeks, it was significantly lower. The diabetic mice were smaller overall but had larger kidneys because of hypertrophy and signs of renal tubule damage, including scarring and inflammation.

"Initially there is an increase, then a decrease and it keeps going down," the author says, noting the apparent link between less autophagy and greater hypertrophy. By 20 weeks, there was protein in the urine and kidney failure. Kidney cells incubated in high glucose also show this initial increase then, as little as a day later, an autophagy decrease, the author says.

When they knocked out the autophagy gene, both kidney failure and hypertrophy got even worse, and when they activated the gene it prevented the downward progression.

They found in this dynamic pathway that autophagy went down because levels of the autophagy activating gene ULK1 went significantly down, and that ULK1 went down because miR-214 went way up. There are about 30 genes involved in autophagy and they found ULK1 most consistently down in their diabetes models and in kidney biopsies from patients with diabetes.

So they backed up a step to find what was regulating miR-214 and found p53, the known tumor suppressor that is also known to regulate the cell cycle and which they also think is a stress responder, likely to help eliminate bad cells.

When they knocked out or suppressed miR-214 from the cells of the long tubules right off the kidneys' filtering units, where a lot of the resorption of valuable items like proteins and amino acids normally happens, ULK1 expression and autophagy activity did not decrease in diabetes. There was less unhealthy overgrowth of the kidney and better kidney function, indicated by less spilling of protein. So they went back one step again, this time blocked p53 and saw miR-214 levels did not go up and the downstream benefits of blocking its action were essentially the same.

When they compared human samples of patients with diabetes to biopsies of healthy kidneys, none of the normal samples had signs of p53 but it was present in 15 of the 20 biopsies of patients who had diabetes and varying stages of related kidney problems. There were similar findings about miR-214. The healthy kidneys showed high levels of ULk1 as they should and diabetes biopsies had low levels of this well-established frontline autophagy gene.

"We have a signaling pathway that is very important to hypertrophy, for cell death and inflammation in diabetes that finally leads to kidney failure," the author says, and interfering with that pathway could make a big difference in the lives of patients whose kidneys are in jeopardy.

"Instead of progressing in 10 to 12 years into kidney failure, we may be able to slow it down to 20 or 30 years or prevent it from happening," the author says.

miR-214 is a logical intervention target because it clearly stands in the way of autophagy in the face of diabetes and normally has no obvious role in kidney function, the author says. p53 is likely not a good target for a chronic problem like diabetic kidney disease because of its clear function as a tumor suppressor, the author says, however increasing ULK1 levels is another treatment possibility.

Hypertrophy is part of the pathogenic process that leads to kidney failure, as tubular cells have to work harder and get bigger as a result, like an arm muscle responding to weight lifting, but at some point it results in dysfunction. Autophagy is activated to protect those renal tubule cells.

"This helps the cell combat stress to enable it to still survive," the author says. And it may be a key difference in the resilience of kidneys following an acute kidney injury, which as the name implies, indicates some sort of sudden damage to the kidneys like a blockage of blood flow or a serious burn.

"We know in patients with acute kidney injury, the outcome is very different in different people," the author says. The kidneys of generally healthy people tend to recover with proper care, while those with existing health problems that affect the kidneys, like hypertension and diabetes, or who are simply over age 75, may proceed to kidney failure, which requires dialysis or an organ transplant to survive. It was known that autophagy is protective and activated in an acute kidney injury and the author got the idea that maybe in diabetes that protection is lost or at least impaired. A subsequent study by another investigator showed that people with obesity related type 2 diabetes did have impaired autophagy, which matched what they were seeing in the lab, so he decided to focus on why the decrease.

Metabolic changes occur in diabetes, like high levels of glucose, inflammation and oxidative stress; cell powerhouses, called mitochondria, can dysfunction; and the endoplasmic reticulum where proteins are properly folded, can be disrupted. The kidney can grow larger, initially likely to accommodate the challenging work environment, but if it continues, the kidney, much like a heart in failure, may become enlarged, and its function diminished or destroyed, the author says. Patients with diabetes who develop hypertrophy are more likely to develop end stage renal disease, the scientists write. While he is not certain impaired autophagy completely explains the unhealthy growth, he is confident it contributes to it.

Cell stress is a major instigator of the low, so-called basal, level of autophagy that is going on all the time throughout the body. Problems with autophagy already are associated with diseases from cancer to Alzheimer's and heart disease, and it's also implicated in diabetes.

Some cells need more rigorous autophagy, like high-functioning neurons that are supposed to last a lifetime, and the podocytes that wrap around tiny capillaries in the approximately 1 million filtering units inside each kidney.

"You need to keep them in a healthy condition their whole life," the author says of the podocytes that keep a tight grip on capillaries with little foot-like extensions and are essential to the essential filtering role of the kidney, like keeping proteins from being lost in the urine.

Renal tubule cells, which were the focus of the study, and carry urine out of the filtering units toward the bladder, filtering salt and water along the way, are the most prominent kidney cell type and they normally function well with relatively low levels of autophagy, the author says. Evidence of inadequate clearance of dysfunctional components has been found in the tubule cells of the kidney, and there is a consensus that autophagy is impaired in this common kidney condition, the author says.

Both type 1 and 2 diabetes tend to be lifelong conditions and the kidneys an early target of high levels of glucose in the blood which damages blood vessels, which can drive up blood pressure, which causes more damage. Ultimately the oversized kidneys will shrink because of degeneration and scarring.

For the study, biopsies from 20 people with diabetes and 14 people without.