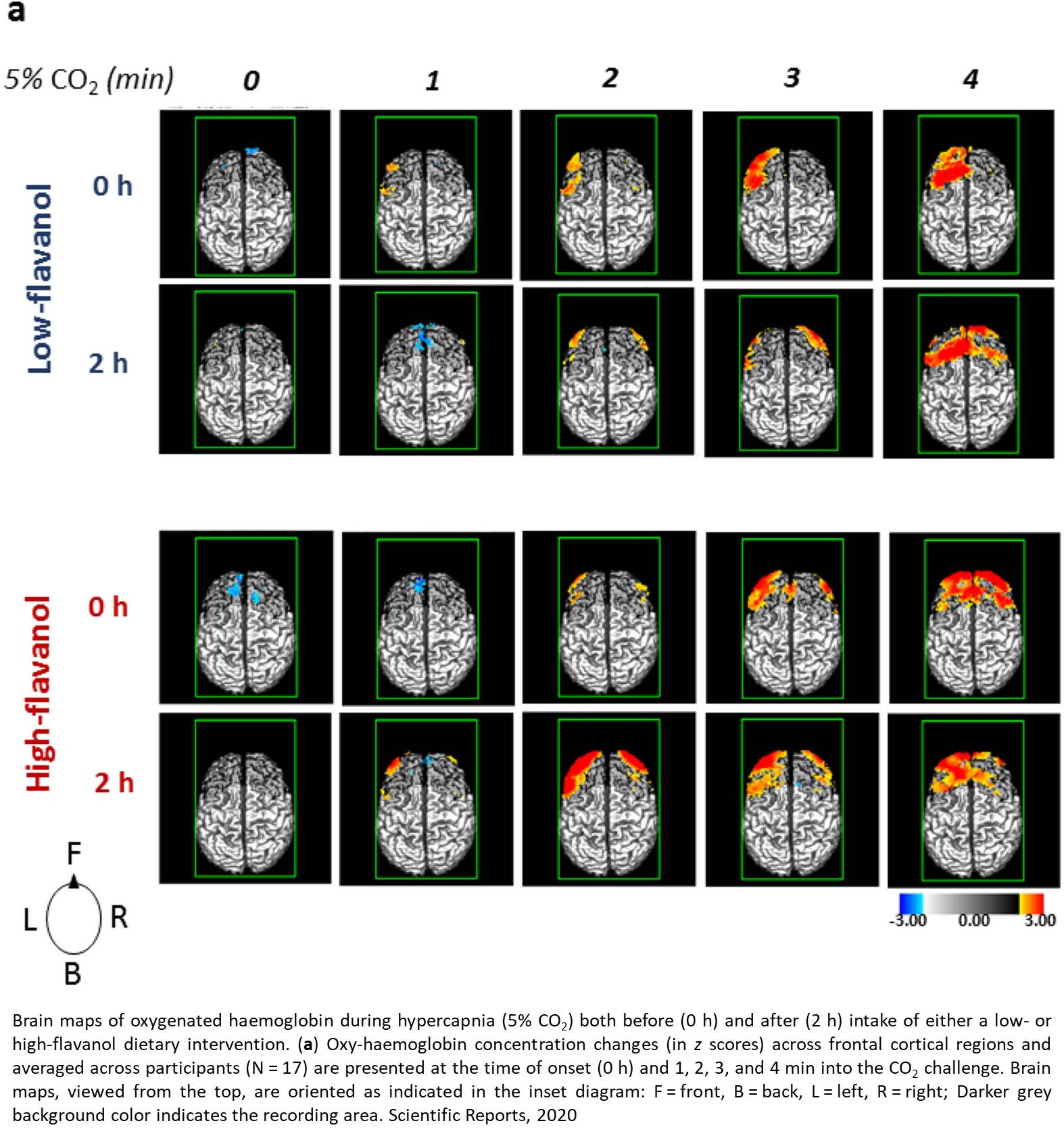 The brains of healthy adults recovered faster from a mild vascular challenge and performed better on complex tests if the participants consumed cocoa flavanols beforehand, researchers report in the journal Scientific Reports. In the study, 14 of 18 participants saw these improvements after ingesting the flavanols.

Previous studies have shown that eating foods rich in flavanols can benefit vascular function, but this is the first to find a positive effect on brain vascular function and cognitive performance in young healthy adults, said the corresponding author.

"Flavanols are small molecules found in many fruits and vegetables, and cocoa, too," the author said. "They give fruits and vegetables their bright colors, and they are known to benefit vascular function. We wanted to know whether flavanols also benefit the brain vasculature, and whether that could have a positive impact on cognitive function."

The team recruited adult nonsmokers with no known brain, heart, vascular or respiratory disease, reasoning that any effects seen in this population would provide robust evidence that dietary flavanols can improve brain function in healthy people.

The team tested the 18 participants before their intake of cocoa flavanols and in two separate trials, one in which the subjects received flavanol-rich cocoa and another during which they consumed processed cocoa with very low levels of flavanols. Neither the participants nor researchers knew which type of cocoa was consumed in each of the trials. This double-blind study design prevents researchers' or participants' expectations from affecting the results.

About two hours after consuming the cocoa, participants breathed air with 5% carbon dioxide - about 100 times the normal concentration in air. This is a standard method for challenging brain vasculature to determine how well it responds, another author said.

The body typically reacts by increasing blood flow to the brain, the author said.

"This brings in more oxygen and also allows the brain to eliminate more carbon dioxide," the author said.

With functional near-infrared spectroscopy, a technique that uses light to capture changes in blood flow to the brain, the team measured oxygenation in the frontal cortex, a brain region that plays a key role in planning, regulating behavior and decision-making.

"This allows you to measure how well the brain defends itself from the excess carbon dioxide," another author said.

Most of the participants had a stronger and faster brain oxygenation response after exposure to cocoa flavanols than they did at baseline or after consuming cocoa lacking flavanols, the researchers found.

"The levels of maximal oxygenation were more than three times higher in the high-flavanol cocoa versus the low-flavanol cocoa, and the oxygenation response was about one minute faster," the senior author said.

After ingesting the cocoa flavanols, participants also performed better on the most challenging cognitive tests, correctly solving problems 11% faster than they did at baseline or when they consumed cocoa with reduced flavanols. There was no measurable difference in performance on the easier tasks, however.

"This suggests that flavanols might only be beneficial during cognitive tasks that are more challenging," the senior author said.

Participants varied in their responses to cocoa flavanols, the researchers found.

"Although most people benefited from flavanol intake, there was a small group that did not," the author said. Four of the 18 study subjects had no meaningful differences in brain oxygenation response after consuming flavanols, nor did their performance on the tests improve.

"Because these four participants already had the highest oxygenation responses at baseline, this may indicate that those who are already quite fit have little room for improvement," the author said. "Overall, the findings suggest that the improvements in vascular activity after exposure to flavanols are connected to the improvement in cognitive function."