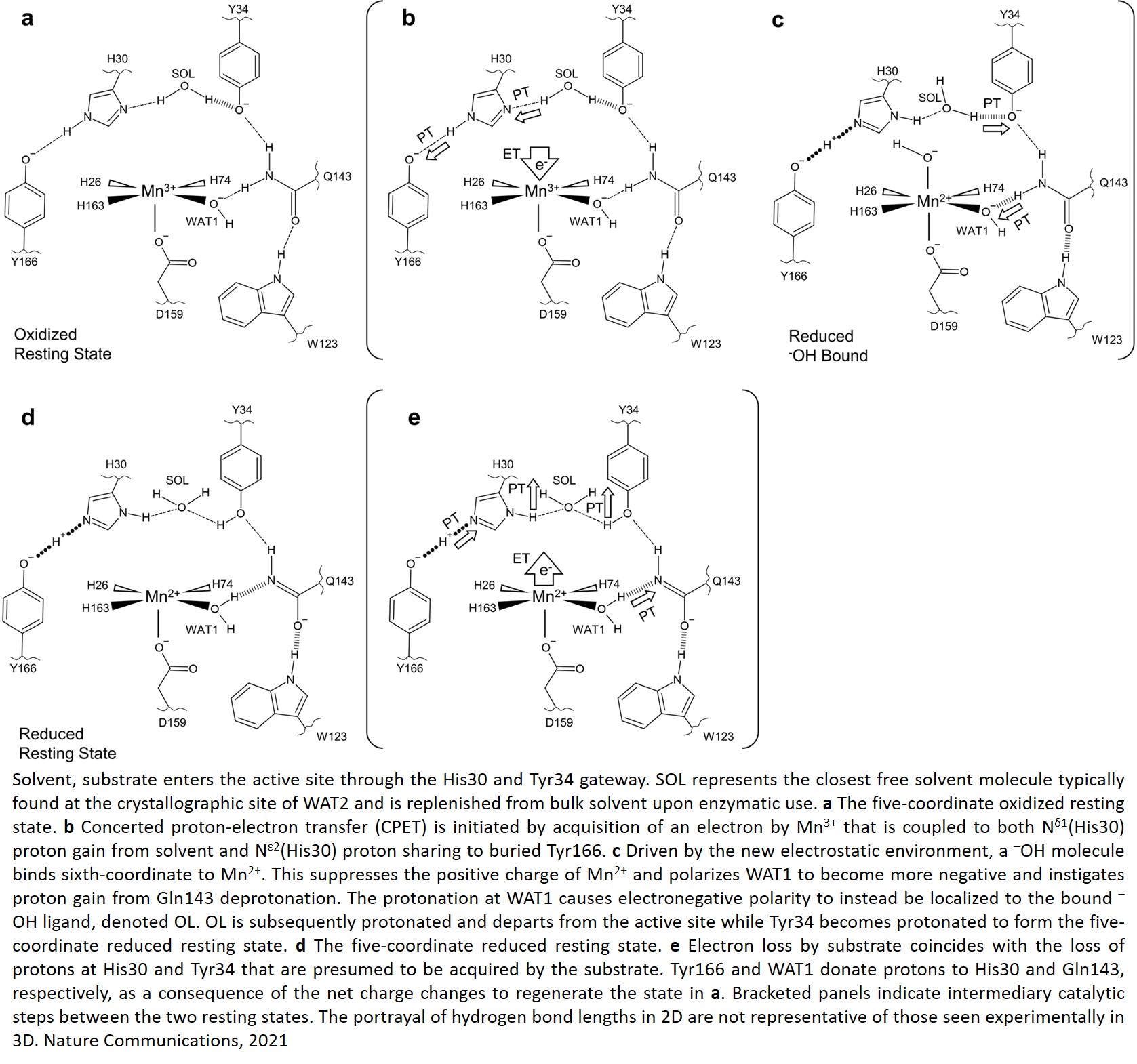 Mitochondria, known as the powerhouses within human cells, generate the energy needed for cell survival. However, as a byproduct of this process, mitochondria also produce reactive oxygen species (ROS). At high enough concentrations, ROS cause oxidative damage and can even kill cells. An overabundance of ROS has been connected to various health issues, including cancers, neurological disorders, and heart disease.

An enzyme called manganese superoxide dismutase, or MnSOD, uses a mechanism involving electron and proton transfers to lower ROS levels in mitochondria, thus preventing oxidative damage and maintaining cell health. More than a quarter of known enzymes also rely on electron and proton transfers to facilitate cellular activities that are essential for human health. However, most of their mechanisms are unclear because of the difficulties in observing how protons move.

Researchers have now observed the complete atomic structure of MnSOD, including its proton arrangements, with neutron scattering. The findings, published in Nature Communications, reveal how protons are used as tools to help MnSOD transfer electrons for reducing ROS levels. The work could help experts develop MnSOD-based treatments and design therapeutic drugs that mimic its antioxidant behavior. The neutron study also opens an avenue for studying other enzymes that utilize electron and proton transfers.

"Using neutrons, we were able to see MnSOD features that were completely unexpected, and we believe this will revolutionize how people think this enzyme and other enzymes like it operate," said the corresponding author of the new study.

MnSOD works by targeting superoxide, a reactive molecule that leaks from the mitochondrial energy production process and is the chemical precursor for other harmful ROS. The enzyme's active site turns superoxide into less toxic products by using its manganese ion to move electrons to and from the reactive molecule. The manganese ion is capable of stealing an electron from a superoxide molecule, converting it to oxygen. This stolen electron can then be given to another superoxide to make hydrogen peroxide.

For this biochemical reaction to work, a series of proton movements need to take place between the enzyme's amino acids and other molecules at its active site. The protons act as instruments that enable the electrons to move. Until now, the enzyme's sequence of electron and proton transfers, also known as its catalytic mechanism, had not been defined at the atomic level because of challenges in tracking how protons are shuttled between molecules. A fundamental understanding of this catalytic process could inform therapeutic approaches that harness this enzyme's antioxidant abilities.

Proton transfers are not easily seen because they occur in the form of atomic hydrogen, which x-rays and other techniques for observing atoms have difficulty detecting. Neutrons, on the other hand, are sensitive to lighter elements like hydrogen and thus can pinpoint proton movements. Neutrons are also well suited for this research because they do not interact with electrons, unlike other atom-visualizing techniques. Thus, they can be used to study the inner workings of electron-transfer enzymes without disturbing their electronic state.

"Because neutrons are particles that do not interact with charge, they don't interfere with the electronic properties of metals, which makes them an ideal probe for analyzing metal-containing enzymes, like MnSOD," said a neutron scattering scientist involved with this study. "Additionally, neutrons don't cause radiation damage to materials, allowing us to collect multiple snapshots of the same sample as it shifts between electronic states."

Using MaNDi, the macromolecular neutron diffractometer at ORNL's Spallation Neutron Source (SNS), the research team was able to map out the entire atomic structure of MnSOD and track how the enzyme's protons change when it gains or loses an electron. By analyzing the neutron data, the scientists traced the pathways of protons as they moved around the active site. Using this information, the team built a model of a proposed catalytic mechanism, detailing how electron and proton transfers enable MnSOD to regulate superoxide levels.

Their analysis suggests that catalysis involves two internal proton transfers between the enzyme's amino acids and two external proton transfers that originate from solvent molecules. While the results of this study confirm some past predictions of the enzyme's biochemical nature, several aspects were unexpected and challenge previously held beliefs.

For example, the team uncovered cyclic proton transfers occurring between a glutamine amino acid and a manganese-bound solvent molecule. This interaction is a central part of the catalytic process, as it allows the enzyme to cycle between its two electronic states. The researchers also found the proton movements within the active site to be unusual, as several amino acids did not have a proton where they normally would. The study demonstrates the dramatic effects a metal has on the chemistry of the active site that is usually not accounted for.

"Our results suggest that this mechanism is more complex and atypical than what past studies had theorized," said a study co-author.

As a next step in the project, the researchers are now planning to examine the enzyme's structure when it is bound to a superoxide substrate. They also aim to study mutated components of MnSOD to gain more details regarding how each amino acid influences catalysis. Another research goal is to expand their neutron analysis to other enzymes that rely on electron and proton transfers to carry out cellular tasks.

"Over a fourth of all known enzyme activities involve electron and proton transfers," said the author. "MnSOD is just one enzyme in a sea of many others, and with neutrons, we can study their catalytic mechanisms to a level of detail that hasn't been possible before."