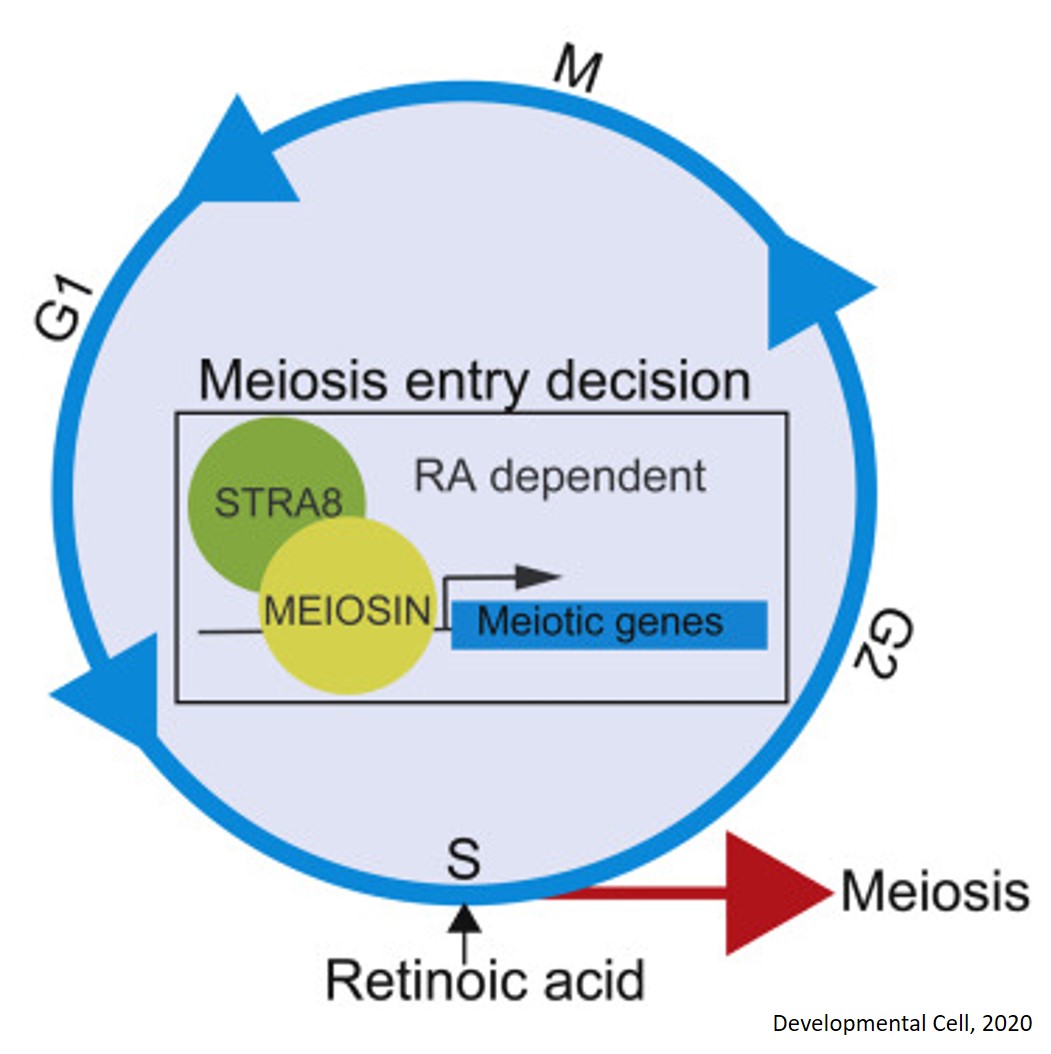 Most cells in the tissues of most organisms proliferate through somatic cell division (mitosis). This is a continuous cycle where a single cell doubles its genetic information (chromosomes) and divides equally to create two copies of the original cell. In contrast, germ (egg and sperm) cells are produced through a special type of cell division called meiosis, which takes place in the gonads. This process begins like normal mitosis but switches after some time to create four genetically dissimilar germ cells that have half the original cell's genetic material. The mechanism that causes this switch has been a longstanding research problem and controlling it is an important, yet challenging, global issue in reproductive medicine.

Recently, a group of researchers set out to assess the proteins involved in meiosis to clarify its development. Using mass spectrometry, the group was able to identify a gene that acts as a meiosis on-switch, labeling it "Meiosin" (for meiosis initiator). The Meiosin gene has the extremely rare property of becoming activated only at a specific time--just before the beginning of meiosis in the gonads.

The authors identified MEIOSIN as a germ-cell-specific factor that associates with STRA8. MEIOSIN, like STRA8, is expressed in response to RA and plays an essential role in meiotic initiation in both males and females. Functional analyses revealed that MEIOSIN acts as a transcription factor together with STRA8, and that both factors are critical for driving meiotic gene activation.

In animal experiments, the researchers found that both male and female mice became infertile if the Meiosin gene was artificially inhibited. Further analysis of the mouse male and female gonads clarified that the gene plays an essential role in meiosis activation. The Meiosin gene acts as a control tower that simultaneously switches on hundreds of genes for germ cell formation, and appears to be involved with infertility. The group expects that the discovery will be a big step forward for reproductive medicine.

There are many cases of human infertility where the cause is unknown; this finding potentially reveals a new pathology. Even though these experiments were performed on animal models, the Meiosin gene is present in humans. Abnormal meiosis in the eggs of older women can cause chromosomal abnormalities resulting in miscarriage or Down syndrome. And in societies with increased age of pregnancy, therapies developed from this research could ensure meiosis quality and decrease the instances of these complications.

"Our work shows that the Meiosin gene is the switch that turns on meiosis, the special type of cell division that creates eggs and sperm, and this includes the turning-on of hundreds of other genes in the process. However, the functions of those genes have not yet been fully elucidated," said the senior author. "We were quite surprised to find so many genes with undefined functions lying dormant in this study. We have high expectations that the processes involved in germ cell formation will be greatly clarified as the role each of these genes plays is discovered. If it eventually becomes possible to control meiosis, the benefits would be far-reaching for reproductive medicine, agricultural production, and even assisting rare species reproduction."
This research was posted online in Developmental Cell.