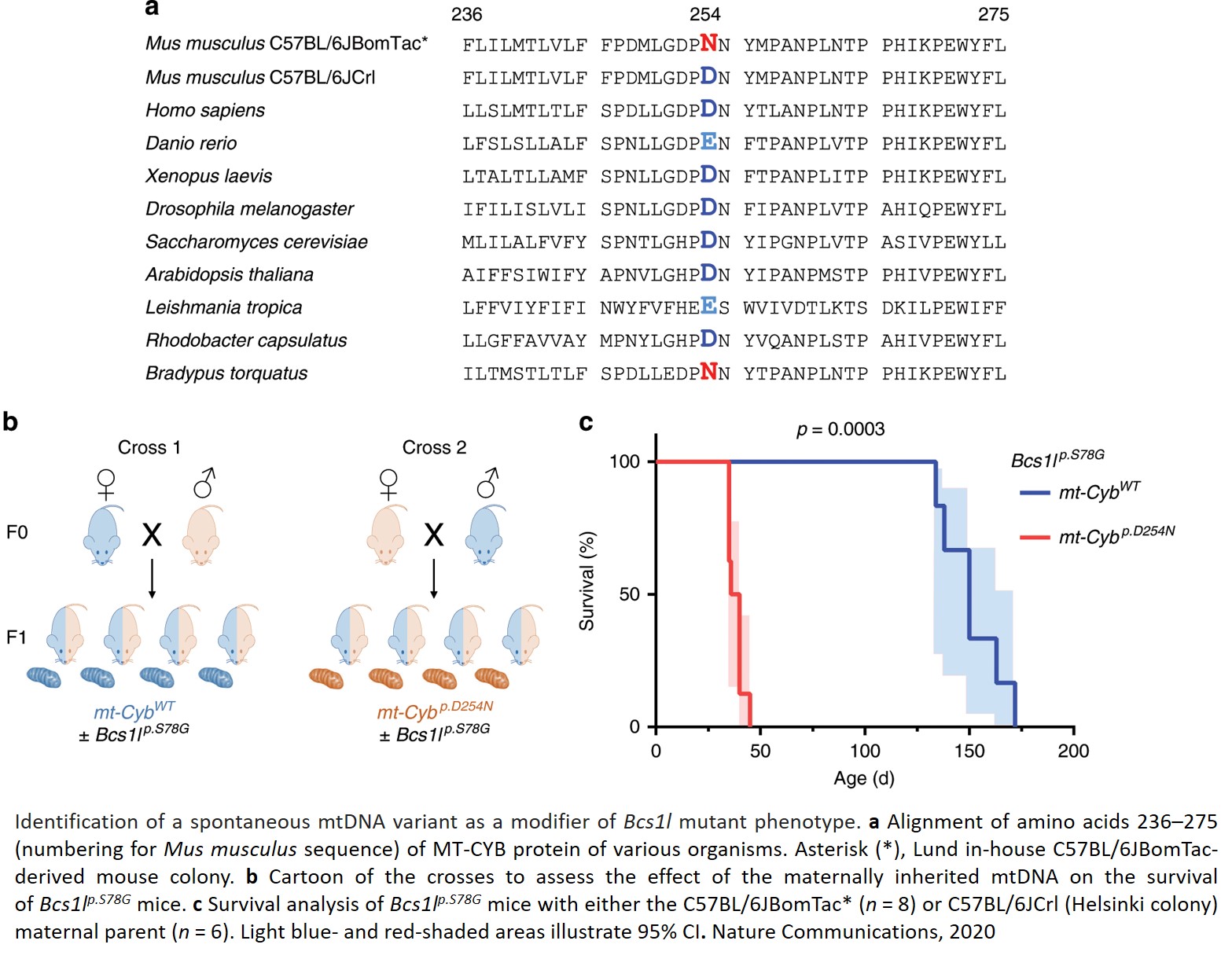 The new mitochondrial DNA (mtDNA) variant drastically speeds up the disease progression in a mouse model of GRACILE syndrome. This discovery provides a new tool for studies of mitochondrial diseases.

GRACILE syndrome, a member of the Finnish disease heritage, is a severe neonatal metabolic disease caused by a point mutation in the nuclear BCS1L gene.

About 10 years ago, the group  generated GRACILE patient mutation-carrying mice to investigate disease mechanisms and develop therapies. Later on, the researchers exported the mice to Helsinki and maintained the mutants in a slightly different genetic background.

Astonishingly, the mutant mice lived five times longer in Helsinki than in the original strain in Lund. By whole genome sequencing, a novel point mutation was discovered in the mitochondrial DNA (mtDNA) of the short-lived Lund strain.

The work revealed that, due to an extremely unlikely coincidence, a random mutation in the mt-Cyb gene had appeared, affecting exactly the same part of mitochondria as the GRACILE mutation and worsening the disease of the mice.

According to computer simulations and spectroscopic measurements performed by collaborators in Finland and Poland, the amino acid change identified in the mice slows down the movement of a part of Rieske protein needed in electron transfer during cellular respiration. The researchers say that this is the first time such an interaction between the nuclear and mitochondrial genomes has been delineated down to almost atomic level.

The author tells that the discovery is an extreme example of an unexpectedly large effect of the genetic background on the course of an inherited disease.

"Modifying the nuclear genome has been commonplace in experimental animal models for a long time, but we are yet to develop a technique with which to transfer mutations in a targeted manner to as many as thousands of copies of the mitochondrial genome in every cell. Our unique mouse model, which carries the spontaneous mtDNA variant, could prove a valuable tool in studies of both mitochondrial diseases and the function of mitochondria in general," the author notes.

The otherwise wild-type mice carrying the newly discovered variant appear healthy, but their metabolism is not entirely normal. An equivalent mutation is found naturally in the three-toed sloth species of South America, an animal with an extremely slow metabolism and an energy-poor diet.

"It is interesting to speculate that the mtDNA variant may be beneficial in certain conditions, which is why it occurs in nature. In further studies, we are interested in the effect of this variant, which subtly affects mitochondrial functions, on metabolism and ageing in mice", the author says.