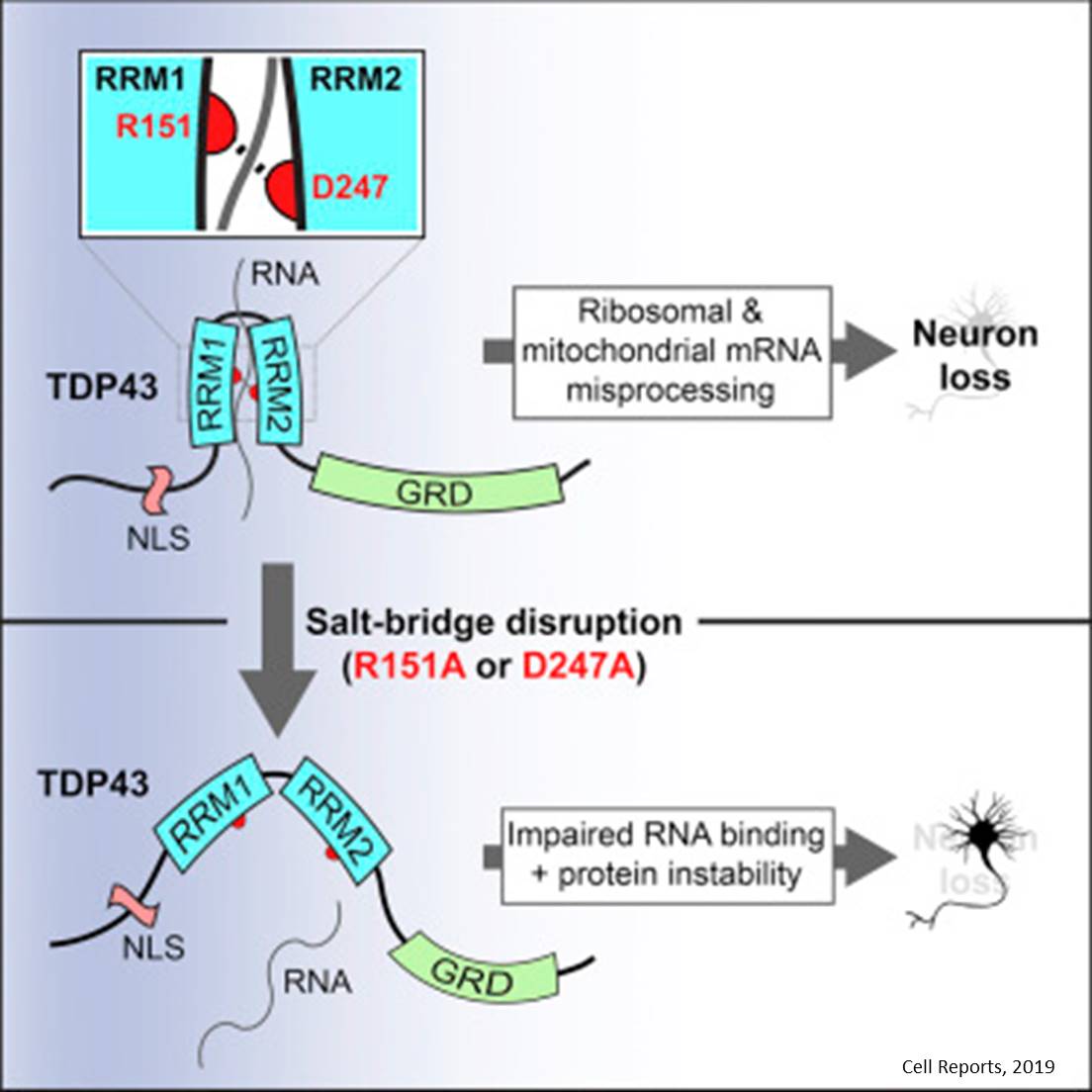 A special focus on rogue proteins may hold future promise in stopping the progression of nerve cell destruction in people who have amyotrophic lateral sclerosis (ALS) or frontotemporal dementia.

ALS, a rare but devastating disorder that's also known as Lou Gehrig's disease, attacks the body's nerve cells, resulting in progressive muscle weakness as the neurons degenerate over time. There is no cure. People with ALS eventually lose their strength and the ability to move their arms, legs and body.

About a third of those with ALS also develop frontotemporal dementia (FTD), a destruction of neurons in the brain that causes profound personality changes and disability. The two diseases are similar in both pathology and genetics. FTD tends to affect people earlier than Alzheimer's disease, the most common type of dementia.

Researchers have long known that for most people with ALS and FTD, deposits of a protein called TDP-43 accumulate in nerve cells. The buildup of TDP-43 may be responsible for the death of nerve cells in ALS and FTD.

The findings published in Cell Reports, pinpoint a structure within the TDP-43 protein that is critical for the function of this protein and its ability to cause nerve cell death. In the process, they uncovered a potential clue to halt the destruction of nerve cells.

"By manipulating the structure of the protein," the senior author says, "we determined that RNA binding is pivotal for maintaining the stability, function and toxicity of TDP-43 in disease models."

RNA's main function is to translate the molecular instructions from DNA to build proteins. For RNA to be translated into protein, it has to be correctly processed, and it has to last long enough to undergo translation. Normally, TDP-43 helps regulate both the processing and stability of RNA.

The team demonstrated that when there is too much TDP-43, RNA is destabilized. The RNAs that were most affected were involved in energy and protein production, two pathways that nerve cells need to survive. They found an identical pattern in cells from ALS patients, suggesting that TDP-43 may be responsible.

So, how does the buildup of TDP-43 cause nerve cells to die? Suspecting it involves TDP-43's ability to bind RNA, researchers focused on manipulating this function of the protein.

Because protein structure is crucial for function, they wondered if they could alter TDP-43's function by changing its structure. By introducing specific mutations, they interrupted an interaction between two parts of the protein needed for RNA binding, creating versions of TDP-43 unable to bind RNA. Unexpectedly, they found that when TDP-43 cannot bind RNA it is quickly degraded, leading them to believe that these versions of TDP-43 would not be so lethal for nerve cells.

To determine whether these engineered versions of TDP-43 are toxic to nerve cells, the team used a method called automated microscopy. Here, thousands of nerve cells in culture are imaged over time using a microscope that is entirely controlled by programs. Additional programs analyze the data, determine when each cell dies, and compare different conditions using methods from human clinical trials.

"This is like a clinical trial in a dish, measuring the fate of each nerve cell as if it were a person," the senior author says. "We saw when we interrupted the structure, it dramatically destabilized the protein. Cells just chewed it up.

"We know in disease that if there is too much TDP-43, cells die," the senior author says. "If the excess TDP-43 is degraded, as here, the cells are rescued."

To further support their conclusions, the investigators created a worm model of TDP-43 with the same structural change using CRISPR/Cas9 genome engineering. Worms expressing these versions of TDP-43 were identical to worms with no TDP-43 at all, suggesting that the structure targeted by the mutations is essential for TDP-43 function and toxicity.

Taken together, the findings show that modifying TDP-43 structure eliminates its ability to bind RNA and cause nerve cell death in models of ALS and FTD.

Targeting this structure opens the potential to explore new therapies for ALS and FTD.

"If you have an approach that can interrupt this structure, you might be able to mop up the extra TDP-43 that's there and prevent nerve cell death," the senior author says.

Such an approach would likely take the form of a drug that would interact with TDP-43, interfere with its structure and cause TDP-43 to be degraded. Even so, completely knocking TDP-43 out is not feasible, as the protein is essential for life. "But in theory, the dose can be adjustable, something that gives you a dial on TDP-43," the senior author says. That leads him to the next question: "What's the magic level?"