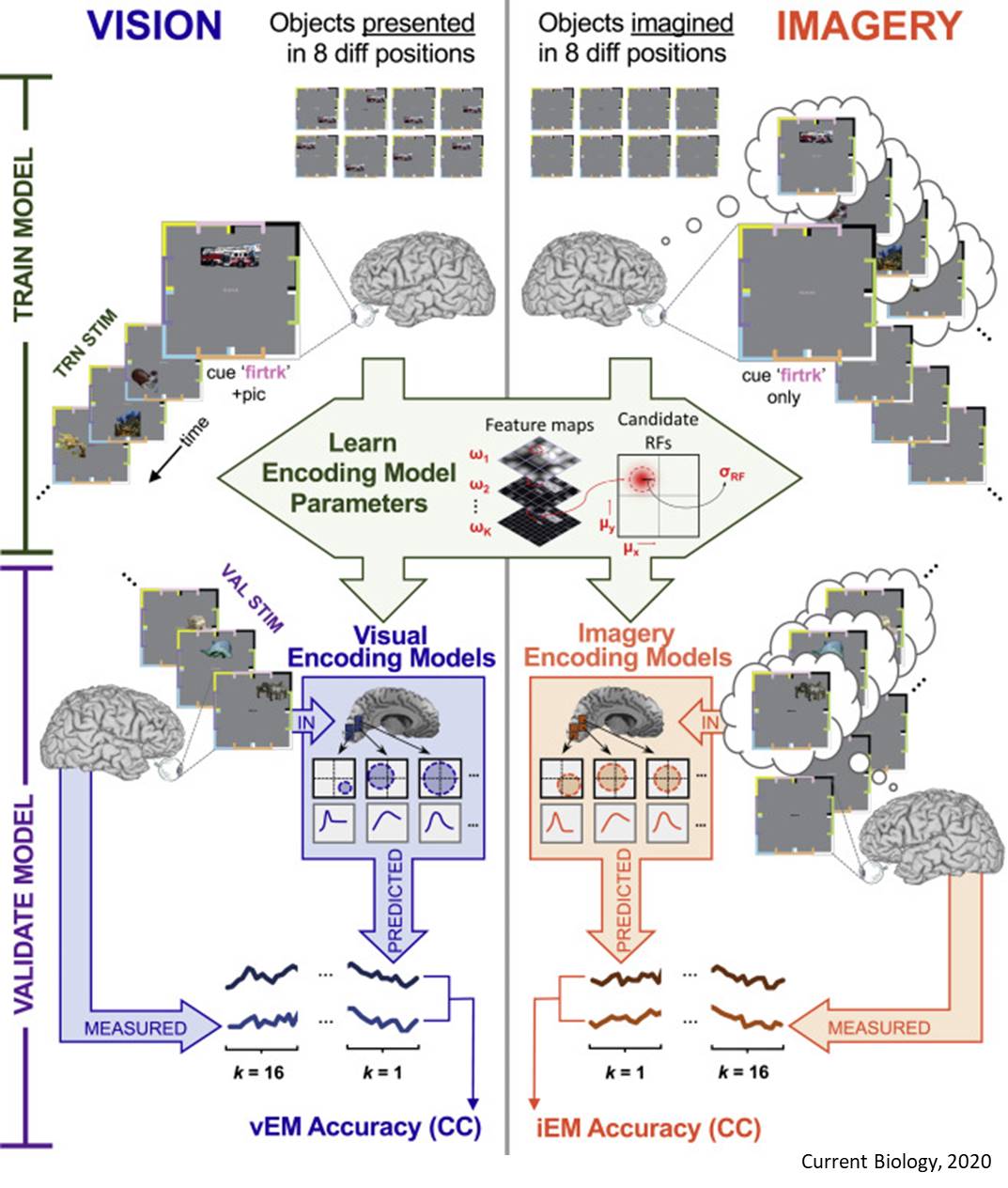 These findings add knowledge to the field by refining methods to study mental imagery and vision. In the long-term, it could have applications for mental health disorders affecting mental imagery, such as post-traumatic stress disorder. One symptom of PTSD is intrusive visual reminders of a traumatic event. If the neural function behind these intrusive thoughts can be better understood, better treatments for PTSD could perhaps be developed.

"We know mental imagery is in some ways very similar to vision, but it can't be exactly identical," explained the senior author. "We wanted to know specifically in which ways it was different."

To explore this question, the researchers used a form of artificial intelligence known as machine learning and insights from machine vision, which uses computers to view and process images.

The team trained this network to see images and then took the next step of having the computer imagine images. Each part of the network is like a group of neurons in the brain. Each level of the network or neuron has a different function in vision and then mental imagery.

To test the idea that these networks are similar to the function of the brain, the researchers performed an MRI study to see which brain areas are activated with mental imagery or vision.

While inside the MRI, participants viewed images on a screen and were also asked to imagine images at different points on the screen. MRI imaging enabled researchers to define which parts of the brain were active or quiet while participants viewed a combination of animate and inanimate objects.

Once these brain areas were mapped, the researchers compared the results from the computer model to human brain function.

"When you're imagining, brain activity is less precise," said the author. "It's less tuned to the details, which means that the kind of fuzziness and blurriness that you experience in your mental imagery has some basis in brain activity."

The fuzzy dream-like state of imagery helps us to distinguish between our waking and dreaming moments. In people with PTSD, invasive images of traumatic events can become debilitating and feel like reality in the moment. By understanding how mental imagery works, scientists may better understand mental illnesses characterized by disruptions in mental imagery.

"When people have really invasive images of traumatic events, such as with PTSD, one way to think of it is mental imagery dysregulation," explained the author. "There's some system in your brain that keeps you from generating really vivid images of traumatic things."

A better understanding of how this works in PTSD could provide insight into other mental health problems characterized by mental imagery disruptions, such as schizophrenia.

A limitation of the study is the ability to recreate fully the mental images conjured by participants during the experiment. The development of methods for translating brain activity into viewable pictures of mental images is ongoing.

This study not only explored the neurological basis of seen and imagined imagery but also set the stage for research into improving artificial intelligence.

"The extent to which the brain differs from what the machine is doing gives you some important clues about how brains and machines differ," said the author. "Ideally, they can point in a direction that could help make machine learning more brainlike."

Vasomotion is critical in clearing amyloid from the brain