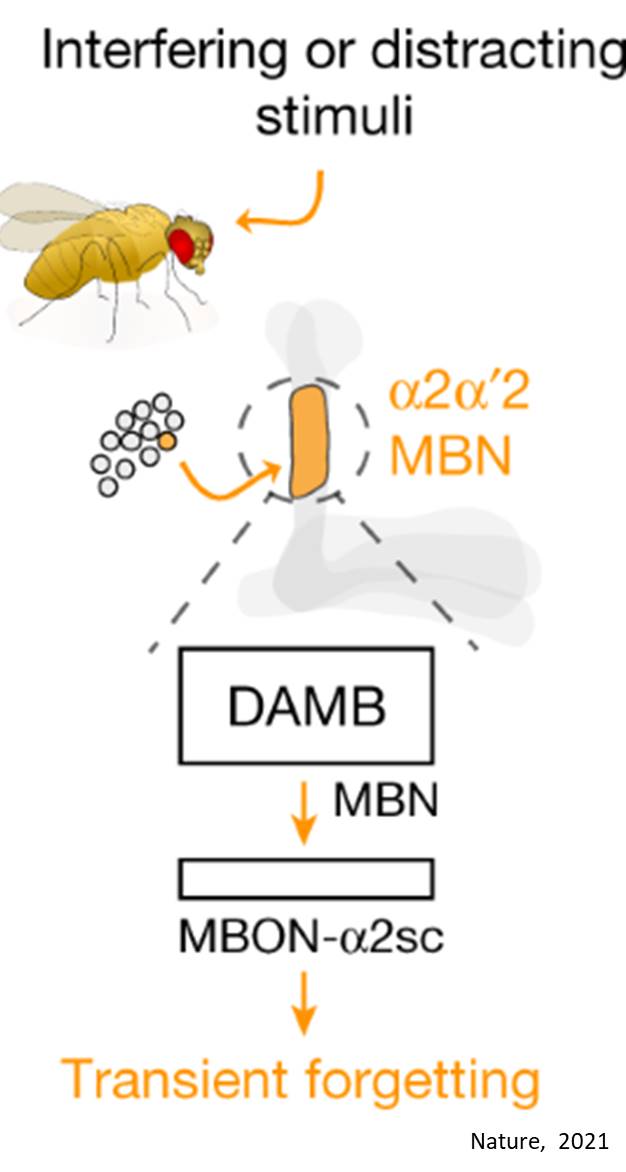 In a landmark neurobiology study, scientists have discovered a memory gating system that employs the neurotransmitter dopamine to direct transient forgetting, a temporary lapse of memory which spontaneously returns.

The study adds a new pin to scientists' evolving map of how learning, memory and active forgetting work, says the senior author.

"This is the first time a mechanism has been discovered for transient memory lapse," the author says. "There's every reason to believe, because of conservation biology, that a similar mechanism exists in humans as well." The study appears in the journal Nature.

Everyone has experienced transient forgetting. A name sits on the tip of our tongue, but resurfaces only after a meeting. We walk into a room and forget why we entered - until we leave. Annoying, to be sure. But does it represent a mental glitch, or is absentmindedness a feature of a normal brain? Was the elusive memory erased and somehow restored, or merely hidden for a time? Exactly how transient forgetting worked was unknown until now.

To derive an answer, the team worked in the common fruit fly, a model favored by neurobiologists for decades due to its relatively simple brain structure, ease of study and translatability to more complex animals.

The team put their flies through a series of training exercises, teaching them to associate an odor with an unpleasant foot shock. They then watched as several interfering stimuli, such as a blue light or a puff of air, distracted the flies so they forgot the odor's negative association, temporarily. Interestingly, stronger stimulation led to longer lasting periods of forgetting.

Additional biochemical studies revealed a single pair of dopamine-releasing neurons in the flies, called PPL1-α2α'2, which directed the transient forgetting. Dopamine sent from other neurons didn't have the same effect. The neurons activated dopamine receptors called DAMB on axons extending from neurons in the memory-processing center of the fruit fly brain, called its mushroom body.

Intriguingly, they found the flies' memory performance was restored after the transient forgetting period lifted, says the paper's first author.

"Could we perform better if certain memories are suppressed over others - could we learn or adapt to situations better? Nobody knows. Those are the type of questions that will be explored in the future," the author says. "We found, provisionally, there is a potential memory reserve that is just unable to be expressed at a particular moment."

The mechanisms underlying long-term memory acquisition and consolidation have been thoroughly studied over the past 40 years, the senior author says, but forgetting has been overlooked until recently. It's proving to be a fascinating field. In 2012 the group found a mechanism directing permanent forgetting, finding it is an ongoing, active process, one apparently needed for healthy brain function.

"You can imagine that we have thousands of memories that occur every day in our lifetime, and the brain does not have the capability of remembering, or encoding, all of those memories. So there is a need to erase those memories that are irrelevant to our existence and our daily lives," the senior author says.

Taken together, it's increasingly clear that much of what we think of as memory loss is not a result of broken connections or age-related decline, but an important feature, one necessary for survival, the author says. Much more work lies ahead, he adds.

"We now know that there is a specific receptor in the memory center that receives the transient forgetting signal from dopamine. But we don't yet know what happens downstream. What does that receptor do to the physiology of the neuron that temporarily blocks memory retrieval? That's the major next goal, to understand how this block in retrieval occurs through the activation of this dopamine receptor," the author says. "We are just at the very beginning of understanding how the brain causes transient forgetting."