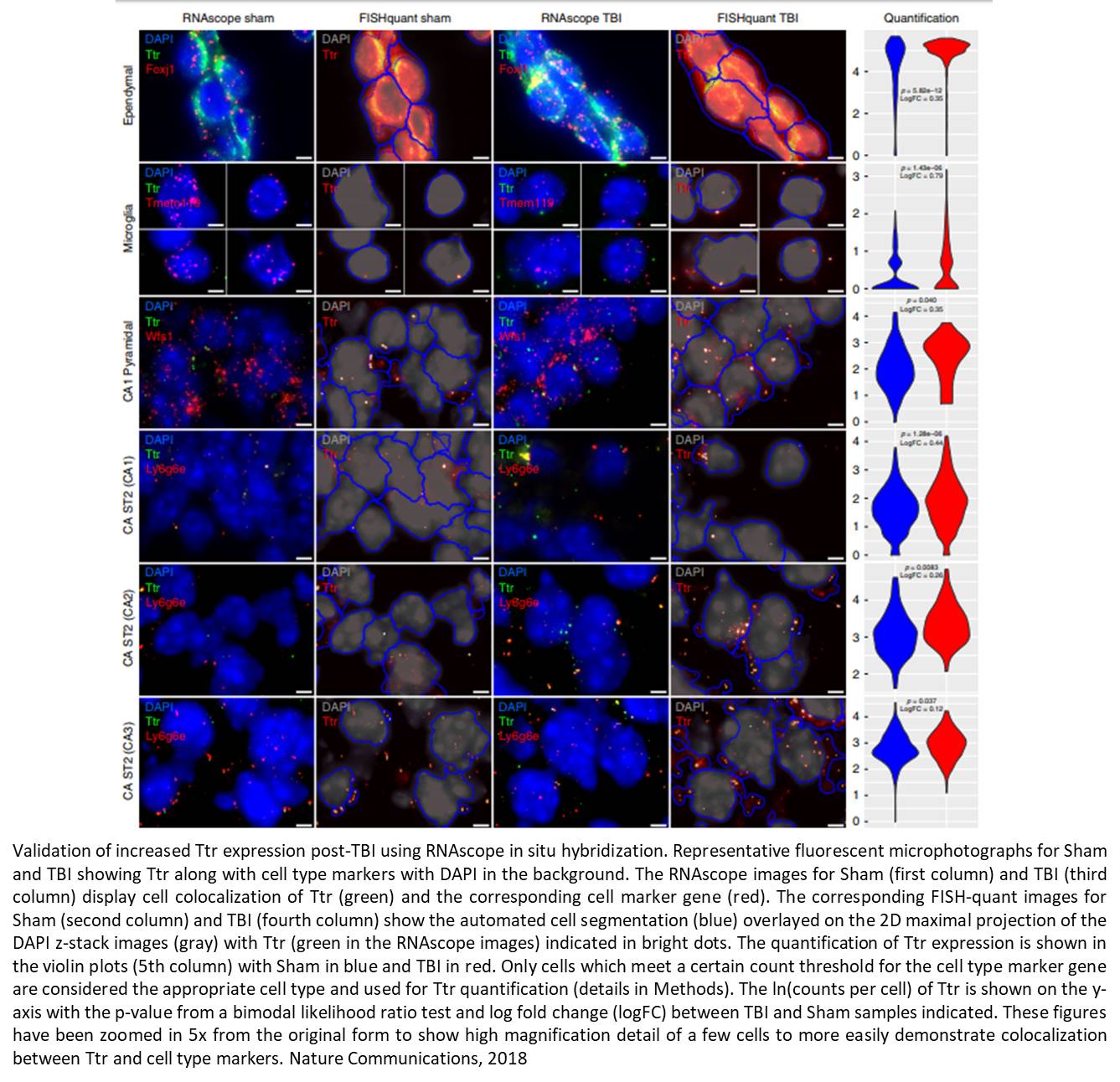 Traumatic head injury can have widespread effects in the brain, but now scientists can look in real time at how head injury affects thousands of individual cells and genes simultaneously in mice as reported in Nature Communications. This approach could lead to precise treatments for traumatic brain injury (TBI).

"Instead of clustering responses according to categories of cells in TBI, we can now see how individual cells in those groups react to head injury," said the senior author.
.
The authors used a novel method known as Drop-seq to closely look at individual brain cells in the hippocampus, a region involved in learning and memory, after TBI or in uninjured control animals. Drop-seq allows thousands of cells and genes to be analyzed simultaneously.

In one set of experiments the team looked at TBI's effects on gene expression activity in individual cells. They found that certain genes were upregulated or downregulated across many different cell types, suggesting these genes may play important roles in TBI. Some of these genes are also known to be involved in diseases, such as Alzheimer's disease, which may help explain how TBI can be a risk factor for other disorders. For example, researchers observed altered activity in genes that are involved in regulating the amyloid protein, which builds up in Alzheimer's.

In particular, the genomic analysis revealed that the activity of the Ttr gene, which is involved in both thyroid hormone transport and scavenging of amyloid protein in the brain, was increased in many cells following TBI, suggesting the thyroid hormone pathway may be a potential target for therapy. The team treated animals with the thyroid hormone thyroxine (T4) 1 and 6 hours after brain injury and saw that they performed much better on learning and memory tasks compared to animals that received a placebo.

The team identified 15 clusters of cells based on gene activity, including two clusters, named Unknown1 and Unknown2, the cells of which had not been described previously in the hippocampus. Further analysis of these clusters revealed that the cells in the Unknown1 group were involved in cell growth and migration and the cells in Unknown2 were involved in cell differentiation during development. The findings in this study also reveal that although two cells may have similar structure and shape, their functions, as suggested by the analysis of gene activity, may differ.

"We now know the secret life of single cells, including how they coordinate with other cells and how vulnerable they are to injury," said the author. "In addition, seeing which types of genes, including genes involved in metabolism, were involved across many cell types helps identify processes that may be critical in TBI."

Future studies will examine how TBI affects cells in areas other than the hippocampus. In addition, more research is needed to learn about long-term effects of TBI. Analyzing individual cells and genes may identify potential therapies for TBI.