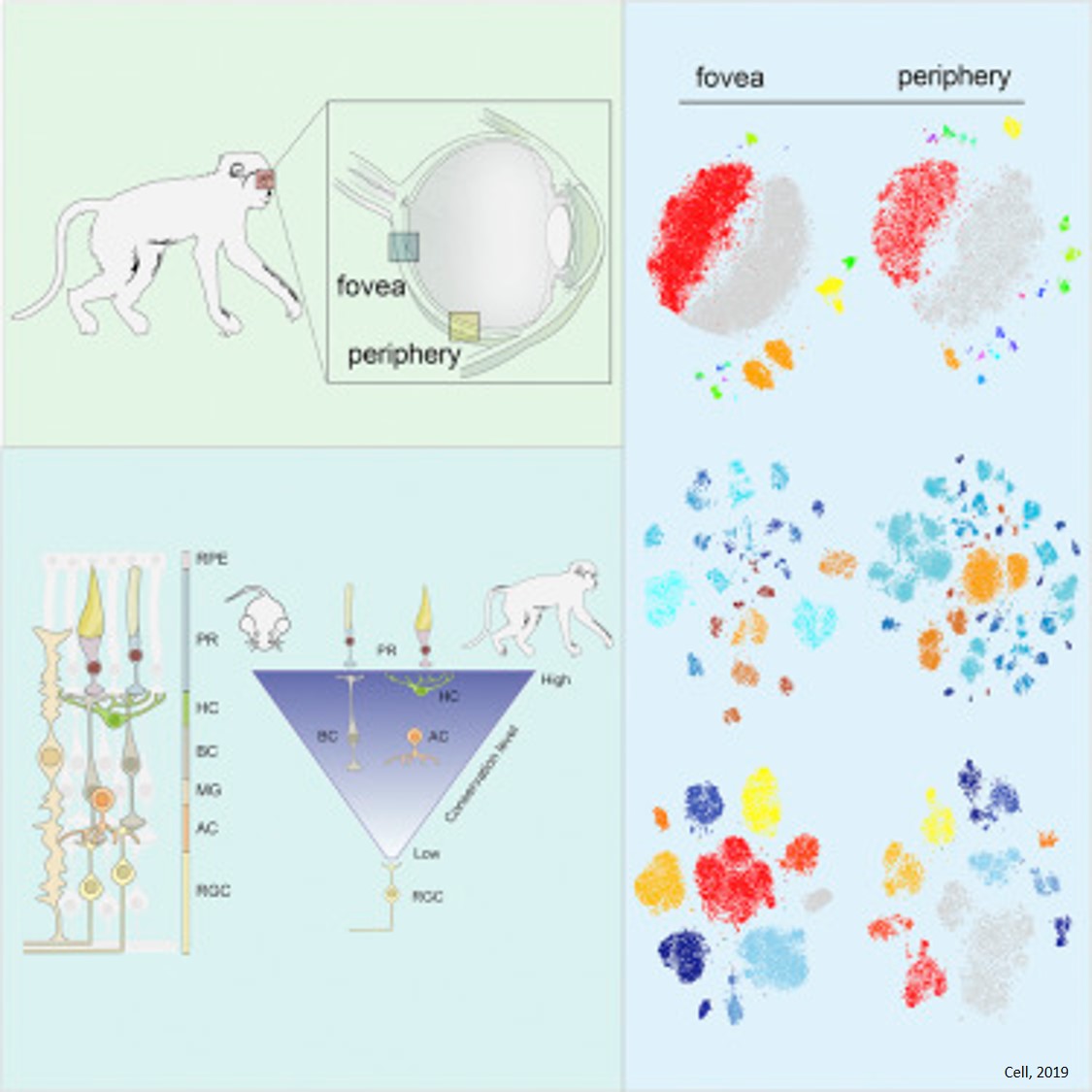 When it comes to understanding how neurons connect to form circuits in the brain, scientists for decades have turned to the retina of the humble laboratory mouse as an ideal model organism. But as a model for vision and vision-related diseases, mice simply aren't equipped.

The problem, said the senior author, is they lack a fovea - a small specialized area in the retina that makes sharp central vision possible. Among mammals, only primates have a fovea, making it all but impossible to study such questions in mice.

And though the fovea has been well-studied for decades - researchers have demonstrated both functional and structural specialization in foveal cells - the mechanisms that give rise to those differences have remained a mystery.

To begin unraveling that mystery, a team of researchers applied high-throughput genetic sequencing methods to create the first cellular atlas of the primate retina and found that while the fovea and peripheral retina share most of the same cell types, cells are found in different proportions in each region, and many show different gene expression patterns.

The study offers an important foundation for researchers to build on as they seek to understand how vision works in primates, including humans, and how vision can be disrupted by disease. The work is described in a paper published in Cell.

To create the cellular atlas, researchers began with 165,000 cells collected from the retinas of macaques - about half of which were foveal cells and half of which were peripheral cells - then used genetic tools to separate them into their various types.

In total, the team identified between 65 and 70 separate types in both the foveal and peripheral cells as well as the genes each type express, and the results produced both good and bad news. The good news was that they also came up with ideas about what makes the fovea special.

"About 90 percent of the cell types are shared, but what is more telling is that...they express a lot of different genes," the senior author said. "We believe that looking at those genes will help us explain a lot of the functional difference between a cell in the fovea and one in the periphery."

The bad news, was that, when the team tried to find mouse equivalents of the main type that sends message from the fovea to the brain, named the "midget ganglion cell," named for their small size, they largely came up empty.

"Unfortunately, 'midgets' are the vast majority of foveal ganglion cells," the senior author said. "We'd hoped we would find the mouse equivalent of those cells...so we could study them using all the tools we've already developed, but we didn't. So that was a disappointment."

Armed with that cellular atlas, researchers turned to nearly 200 genes implicated in blinding diseases, and found that some, particularly those associated with macular degeneration and diabetic macular edema, are expressed in foveal cells - a tantalizing clue for why such diseases effect the fovea. The macula is a slightly larger region of the retina with the fovea at its center so "this pattern makes sense," says the senior author.

"For example, we found one macular degeneration susceptibility gene is expressed at substantially higher levels in foveal rods and cones than in peripheral rods and cones," the senior author said. "That may be related to the fact that it's a macular disease. Similarly, for diabetic macular edema, we found two susceptibility genes expressed at higher levels in the blood vessels in the fovea than the periphery. These two diseases are among the leading causes of blindness in the U.S. and much of the world.

"We also took those genes back to the mouse cellular atlas, and in many cases,  they either weren't expressed or were expressed in different cells," the senior author continued. "That suggests that, for at least some of these diseases, looking at how a gene is acting in mice may not be very telling, because it may not be expressed in the same cells."

Going forward, the cellular atlas could serve as a valuable resource both for studies focused on specific diseases as well as basic science questions.