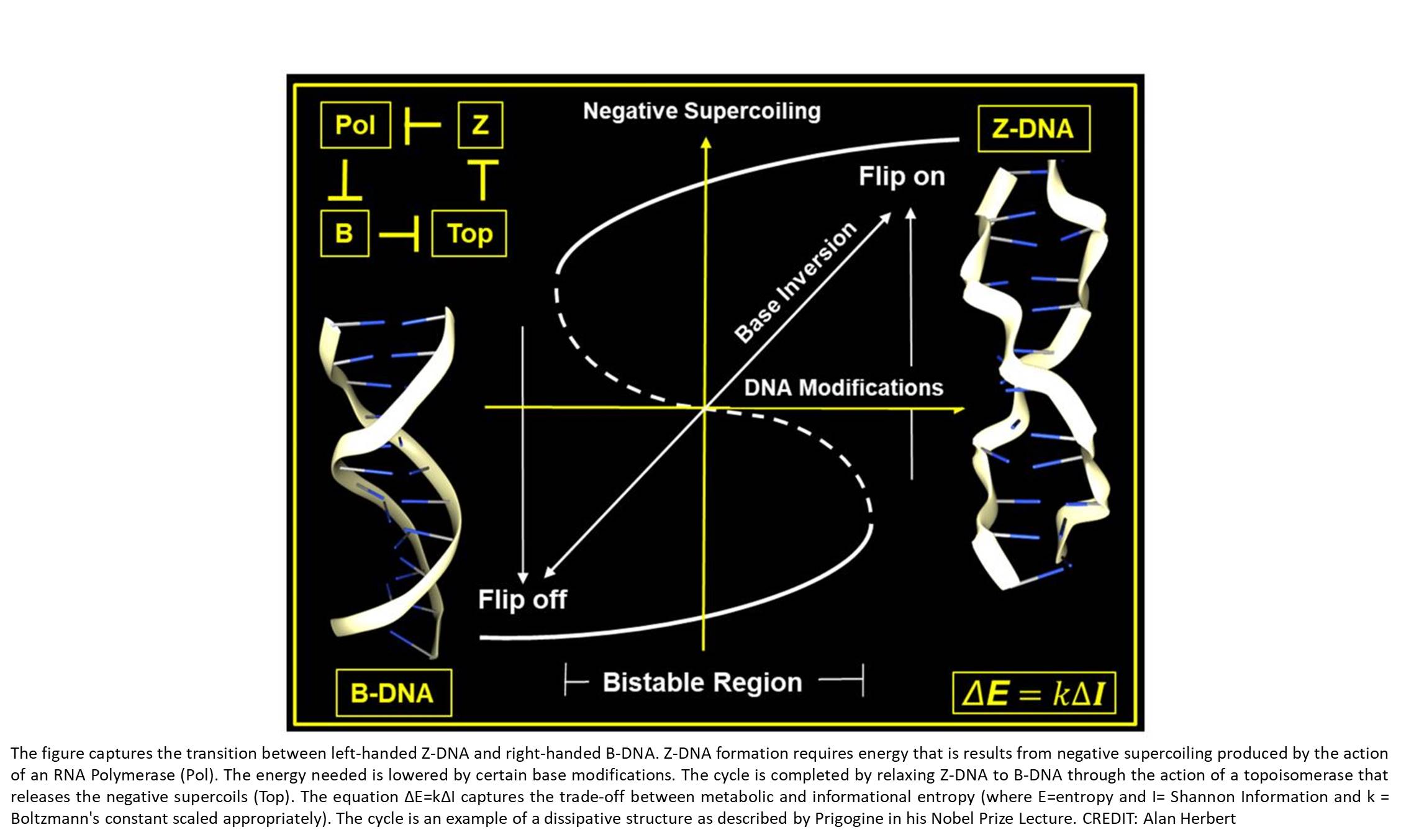 DNA sequences encode information in many different ways. Codons specify the amino acids involved in making a protein. Other DNA sequences specify the start and stop signs for where an RNA begins and ends, or how the RNA transcript is spliced together to make different protein variations from a gene. This coding is static - it does not change. In contrast, other sequences, called Flipons act dynamically to alter the readout of genes. Flipons are sequences that can switch between different DNA conformations, for example from right-handed B-DNA to left-handed Z-DNA, allowing a cell to modify the RNAs it is producing.

Different information is readout from the genome depending on the flipon conformation. Flipons allow a cell to change its response dynamically to environmental challenges. For example, Flipons regulate interferon responses to viruses and in cancer. Families where an RNA editing enzyme called ADAR is unable to recognize a Z-DNA flipon have uncontrolled interferon production, called a type I interferonopathy. In another example, oxidative stress causes base modifications that promote the Z-DNA flipon conformation. In these instances, flipons act as DNA sensor to activate protective pathways to repair and prevent damage to cells.

Flipons are an example of an instructive genetic code, one that directs the compilation of RNA transcripts from the genome. It works in a similar fashion to the way computer codes combine different elements to build a program. By changing conformation, flipons alter editing and splicing of RNA transcripts, allowing the creation of many different outcomes from the same DNA building blocks. The change in programming is dynamic. While the information in DNA is static, cells find many different ways to use that coding to adapt.

Flipons are a way of coding genetic information that affect how organisms evolve. Flipon increase the diversity of genetic programs, resulting more phenotypic variability for natural selection to act upon. This process can be thought of in terms of entropy, where the number of different transcripts produced from a genomic sequence is a measure of its entropy - the more possible transcripts, the higher is the entropy. An organism with higher entropy has an evolutionary advantage. There is a higher likelihood that an adaptation pre-exists for an individual to survive and reproduce when a population faces an environmental challenge.

The flip from one DNA conformation to another trades metabolic energy for genetic information. The relationship between entropy and information is captured in the figure by the term ΔE=kΔI (where E=entropy and I= Shannon Information and k = Boltzmann's constant scaled appropriately). Flipons are examples of the dissipative structures originally described by the Novel Laureate Prigogine in his book "Order out of Chaos" which describes the evolution of living systems.