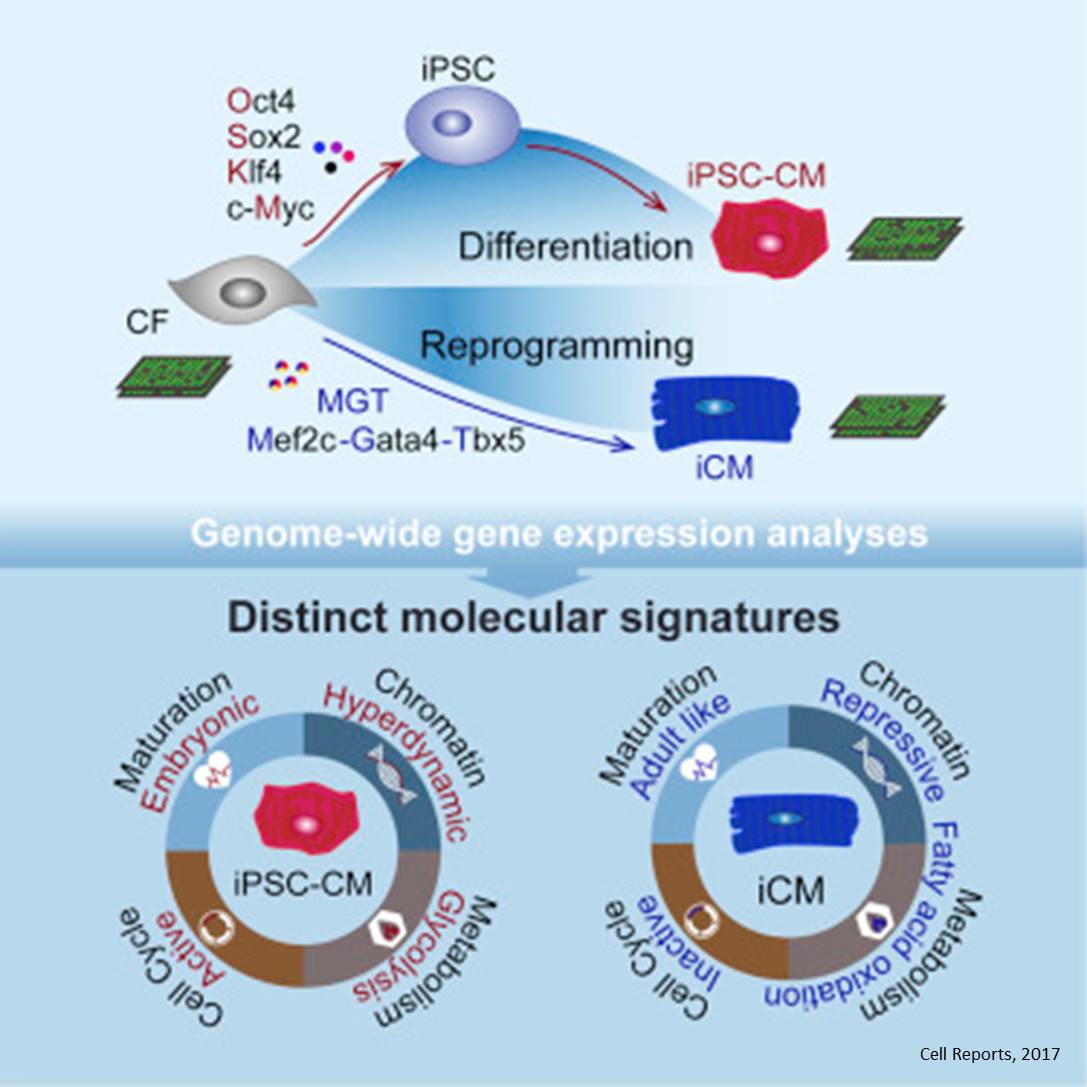 Heart disease continues to be the leading cause of death worldwide, partly due to limited therapeutic options and the heart's inability to regenerate healthy cells called cardiomyocytes after heart attacks. Scientists are exploring ways to reprogram scar tissue cells into healthy heart muscle cells, and now have published the first scientific paper to compare in great detail the two leading reprogramming techniques.

The research published in Cell Reports suggests that one method leads to the creation of cardiomyocytes with genetic signatures that closely mimic those found in healthy adult heart muscle cells. The other reprogramming approach leads to the creation of cardiomyocytes with more embryonic cell signatures. "The differences in the cardiomyocytes generated using these two methods are striking," said the senior author. "Researchers can choose one or the other method based on the specific type of cardiac disease they are interested in studying, while clinicians could carefully select which method is best, considering the pros and cons of each approach."

Cardiomyocytes, the cells responsible for the beating of the heart, are essential to repairing the heart after injury. But after injury, such as a heart attack, many of these cells are irreversibly lost; they've been turned into scar tissue cells. The replacement of these lost cells with patient-specific cardiomyocytes has gained attention as a potential therapy because existing healthy heart tissue better accepts these cells and because of increased recovery rates. Patient-specific cardiomyocytes also offer unique advantages for drug screens to help doctors identify each patient's tailored drug type and dosage.

"This is crucial knowledge," senior author  said. "When developing research projects or creating new therapies, we need to know these sorts of genetic features to best help patients."

Researchers also found that iPSC-CMs feature more active genes and a higher number of genes poised to be either activated or repressed (known as "epigenetically hyperdynamic"), a trait more commonly found in potent cells.

In iPSC-CMs, heart muscle cells called sarcomeres, which give the heart a striated look, were less organized than in iCMs. The contractibility of cardiomyocytes as measured by the intake and removal of calcium was also greater in iCMs, again suggesting that iCM cells are more mature than iPSC-CM cells.

Next, the researchers investigated if allowing iPSC-CMs to grow longer would increase their maturation. iPSC-CMs were collected at various time points and analyzed. Longer culture times increased the number of mature cardiomyocyte genes but did not decrease the number of embryonic cardiomyocyte genes. The sarcomere structure of iPSC-CM cells also improved with increased culture time but did not match the organization of iCM cells. This indicated that iPSC-CMs and iCMs take different routes to maturation.

"Although each method has pros and cons," senior author said, "for congenital heart disease, iPSC-CMs might be ideal for the study of mechanism and for performing drug screens."Surprisingly, one such reprogramming route may be dependent on cell-cycle status.

Adult cardiomyocytes do not enter the cell cycle, meaning they cannot replicate and produce more cells. This partly explains their inability to replenish the heart after injury. Fewer cell cycle genes were active in iCMs. Additionally, the researchers found that reduced expression of a common cell cycle gene in iPSC-CMs resulted in sarcomere organization more similar to adult hearts.

This study highlights the importance of considering various reprogramming techniques used when generating patient-specific cardiomyocytes. The chosen technique may affect the molecular characteristic of the cardiomyocytes generated. The best approach is likely dependent on the desired outcomes of each individual study.