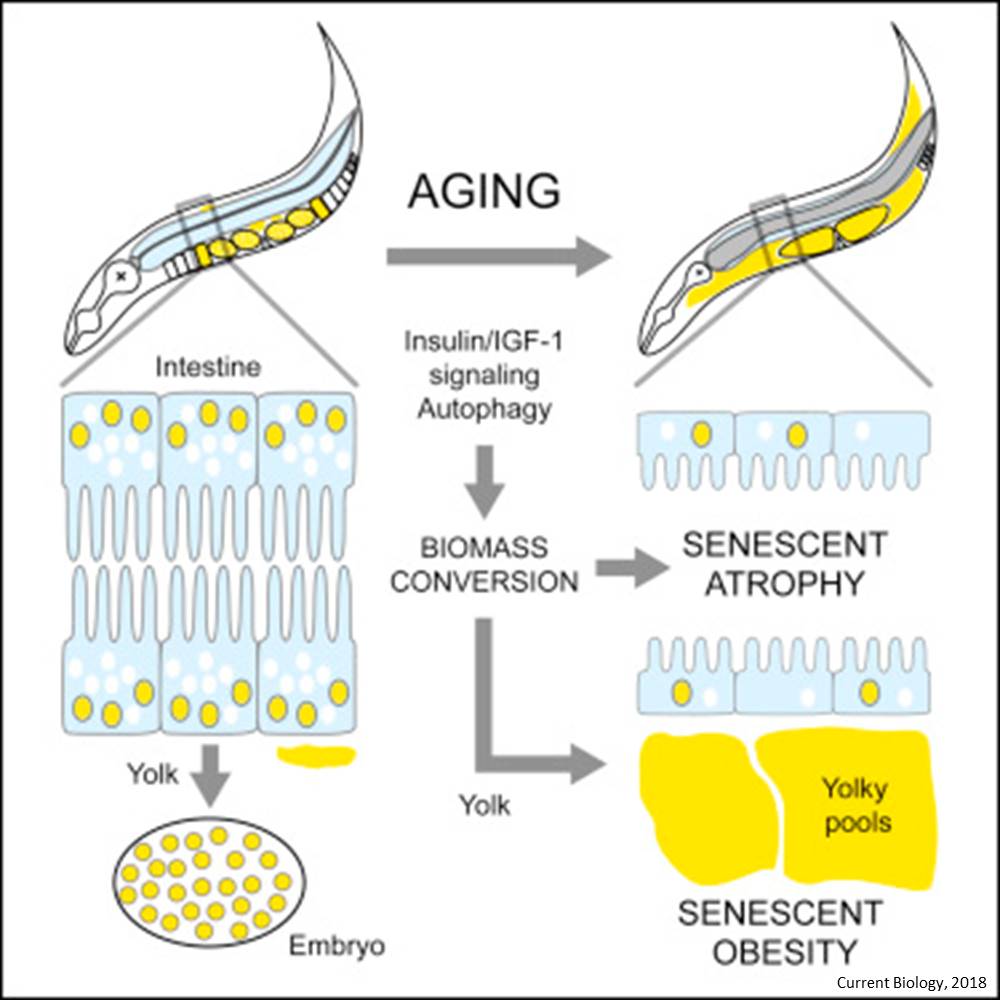 Ageing in worms mainly results from the direct action of genes and not from random wear and tear or loss of function, and the same is likely to be true in humans, according to research published in Current Biology, The study hows that normal biological processes which are useful early on in life, continue to 'run-on' pointlessly in later life causing age-related diseases.

The deteriorative part of ageing, called 'senescence', is the main cause of disease and death worldwide as it leads to dementia, cancer, cardiovascular disease and chronic obstructive pulmonary disease, but scientists have struggled to identify what causes it.

To address this, researchers have focused on discovering the basic principles of ageing by studying simple animals such as Caenorhabditis elegans, a nematode worm used in this study which lives on fruit, and dies of old age after only 2-3 weeks.

Researchers focused on autophagy, where body cells consume their own biomass to recycle components and extract energy. They found that the worms' intestine consumes itself (autophagy) to create the yolk needed for eggs, and in elderly worms, this process causes severe deterioration of the intestine and obesity from a build-up of pooled fats. In turn, this further impacts on the health of the worm by promoting growth of tumors in the uterus, and shortens lifespan.

Inhibiting intestinal autophagy or vitellogenesis rescues both visceral pathologies and can also extend lifespan. This defines a disease syndrome leading to multimorbidity and contributing to late-life mortality. Activation of gut-to-yolk biomass conversion by insulin/IGF-1 signaling (IIS) promotes reproduction and senescence.

"This really surprised us since autophagy is usually thought to protect against ageing rather than cause it," said the lead author on the study.

"It seems that worms crank-up autophagy, which is considered good, to maximise reproductive success, which is good too, but they end up overdoing it, causing senescence," the author added.

The finding suggests parallels with bone erosion in lactating mammals. In women, a process originally designed to leach calcium from bone to create milk for breast feeding may have negative effects after menopause, when it instead contributes to osteoporosis, osteoarthritis and calcified blood vessels.

When useful biological programmes run-on in later life, they can become disease-causing 'quasi-programmes'. Such programmes were recently proposed and the findings support that they are indeed a major underlying cause of ageing.

This does not mean that aging is programmed but instead, that it is a continuation of developmental growth driven by genetic pathways to the point where these becomes harmful. Other examples include an increase in blood pressure causing hypertension and an increase to the eyes' near vision point causing long-sightedness and a need for reading glasses.

The results of this study are consistent with the results of another recent study from the same team showing how the futile activation of genes in unfertilized eggs, which are programmed to generate embryos, cause tumors to form in ageing worms.

"For decades scientists studying ageing have thought of ageing bodies as wearing out much like cars do, from a build-up of damage. What's exciting about this new work is that it shows something completely different. It turns out that we are not like cars - what kills us when we're old is not random damage, but our own genes. It seems that natural selection is short-sighted and ageing is the price we pay," concluded the senior author.