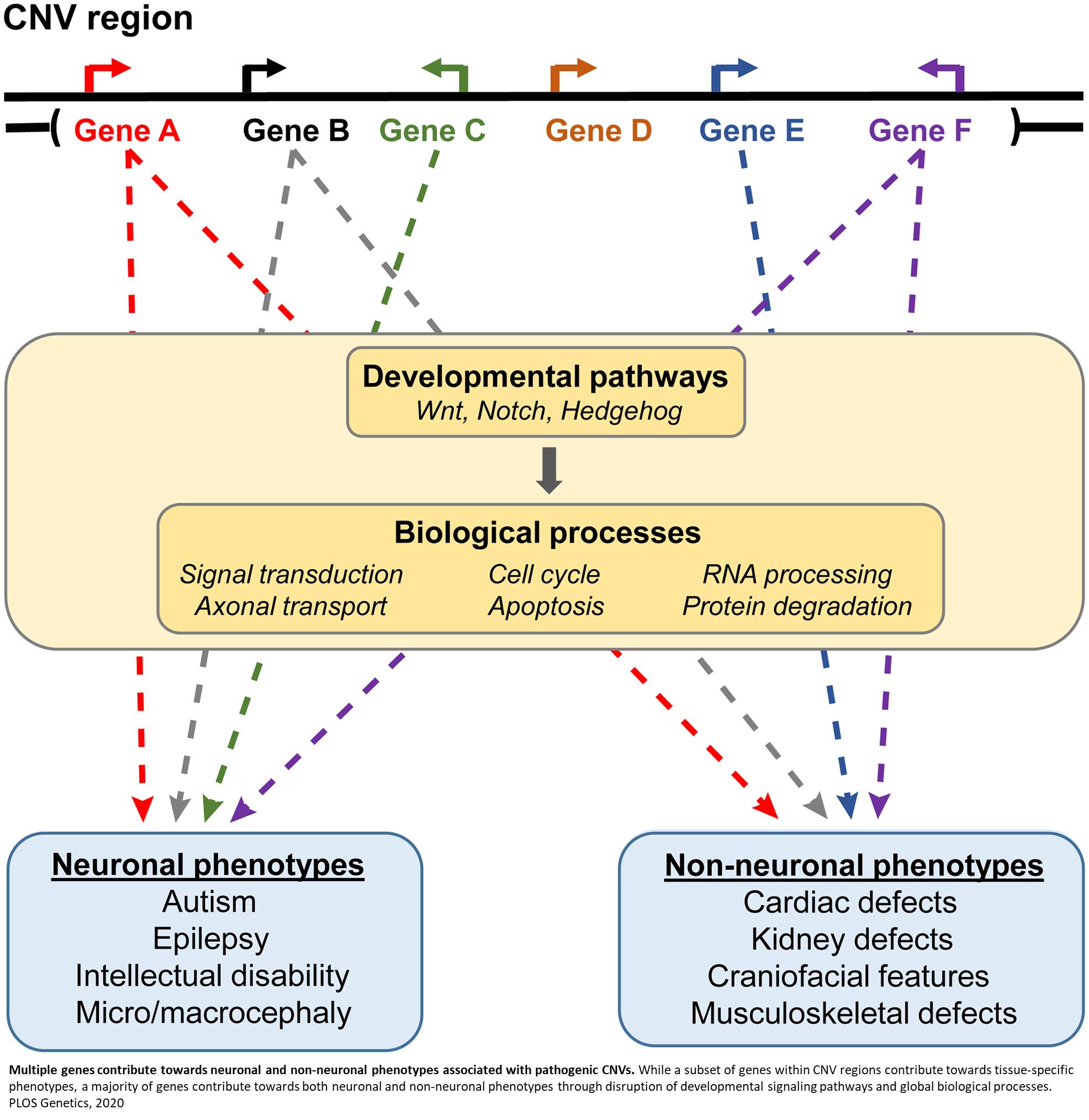 Genes located in 'copy number variants' (CNVs) -- parts of chromosomes that are missing in some individuals and duplicated in others -- that are associated with neurodevelopmental disorders affect more than just brain development, according to new research. The findings, by a team of researchers, appears in the journal PLOS Genetics, and could have important implications in clinical and genetic counseling settings, where it's vital to have a full understanding of the potential impacts of these CNVs.

"Copy number variants have been studied extensively, because they are often associated with important neurodevelopmental disorders such as autism," said the leader of the research team. "But even though many of the disorders associated with CNVs can also result in heart, kidney, or skeletal defects, for example, most studies only look for behavioral or cognitive effects in animal models. So, we wanted to see how genes in CNVs affect development outside of the nervous system."

The research team tested the effect of reducing the expression of dozens of genes located within CNVs, mimicking the effect of deletions, in developing fruit-fly wings. Most of these genes, which were thought of mainly in terms of neurodevelopment, also disrupted wing development.

The team identified fruit-fly counterparts of genes from ten different human copy number variants, and then used a technique called "RNA interference" to reduce the expression of these genes in the developing fruit-fly wing. This reduction -- referred to as "knocking down" expression of the genes -- mimics the deletion of the gene on one chromosome of a chromosome pair, as is the case for human copy number variants.

"We chose to study these genes in the fruit fly because we can test a lot of genes relatively quickly and inexpensively," said the co-first author of the paper. "We tested 59 genes from human CNVs that cause neurodevelopment disorders, plus 20 other genes that have important roles in neurodevelopment. We found that decreased dosage of 72 of these 79 genes had measurable effects on wing development, including six that were lethal to the developing fly, indicating their critical role in early development across multiple organ systems."

The researchers also compared the impact of knocking down the genes in the wing to the effect of knocking them down in the fly eye, which is an experimental system for identifying neurodevelopmental defects. While reduced dosage of most genes caused defects in both the eye and wing, there was no correlation between the severity of the effects, suggesting that genes that caused major disruptions to eye development, and therefore would likely have a major impact on brain development, could have only slight effects on wing development and vice versa.

"We also found that CNV genes are expressed in many other organs in both flies and humans, including heart, kidney, liver, and muscle," said the other co-first author of the paper. "Our analysis of gene interaction networks also showed that CNV genes are likely to affect different cellular mechanisms across these organs."

"Researchers have primarily thought that genes which are associated with autism and intellectual disability are specific to neurodevelopment, but most of them are not," said the senior author. "When a child is diagnosed with one of these disorders, the focus has usually been on the cognitive and behavioral aspects, but our study suggests that we should take a more global approach to try to catch potential heart or kidney defects, for example, as early as possible."