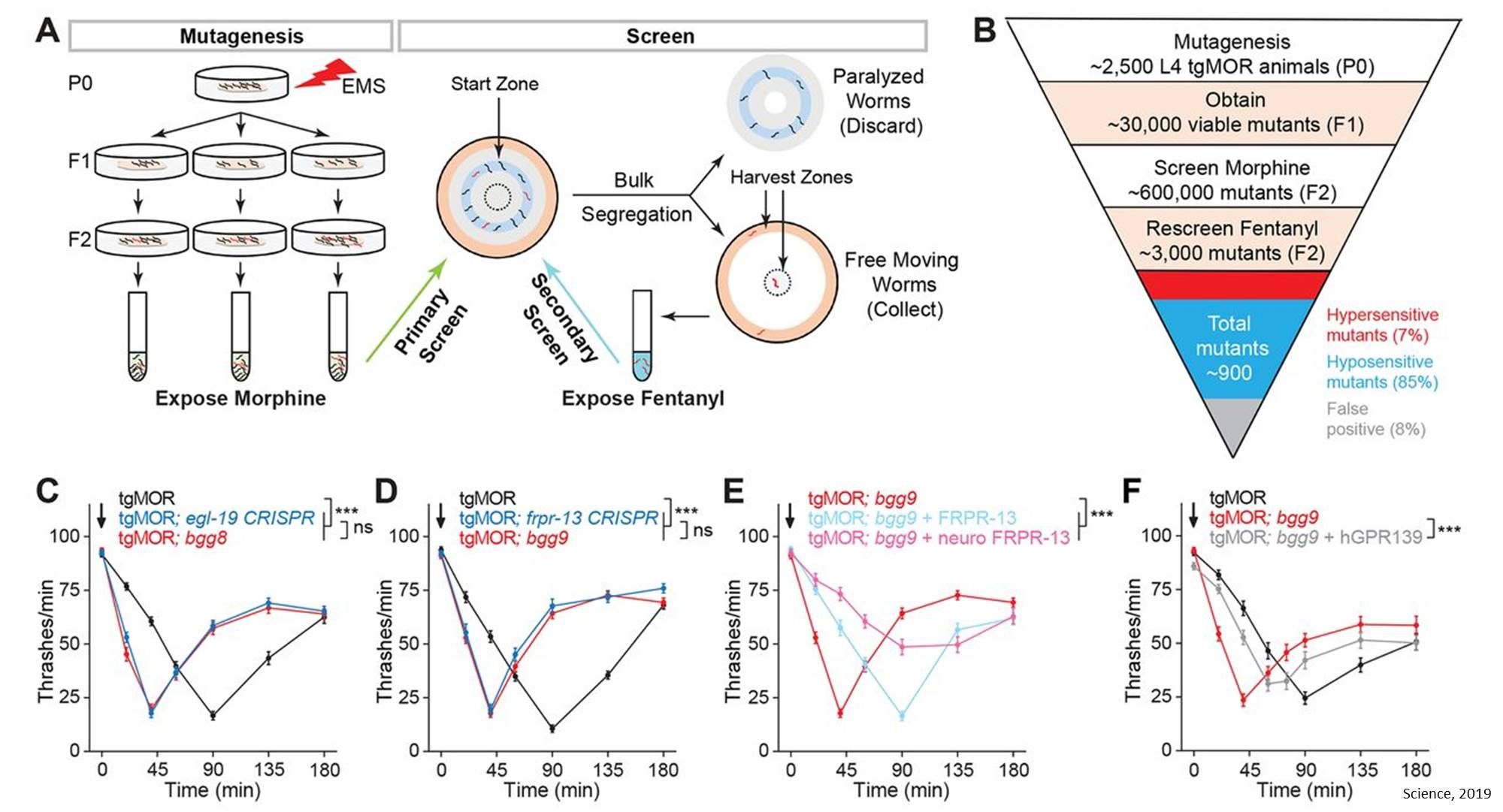 A research team has discovered a biological system that manages cells' response to opioid drug exposure. The unexpected discovery offers new ideas for improving the safety of the one of the most effective, and most abused, group of pain medications.

In a paper published as a "First Release," in the journal Science, lead authors  describe how they designed and implemented a new, unbiased approach for decoding the genetic network that controls actions of opioids in a nervous system.

They used a small soil dwelling animal, the nematode worm, to discover something surprising about one of the most-studied drug receptors.

Their system relies upon the nematode c. elegans, engineered to express the mammalian surface receptor for painkilling drugs, the μ (mu) opioid receptor (MOR). The receptor is not normally found in the worms' DNA, and adding it made the transgenic animals respond to opioids like morphine and fentanyl. The researchers then exposed the worms to mutagens and selected the ones with abnormal responses to opioids. Whole-genome sequencing and CRISPR engineering was then used to pinpoint the genes responsible for those aberrant responses.

"Forward genetics--unbiased genetic discovery--has never been applied to probing an opioid receptor like this," the author says.

The work ultimately led the researchers to the worms' FRPR-13 receptor, conserved in all animals, and known as GPR139 in mammals. It is considered an "orphan" G-protein coupled receptor (GPCR) with poorly understood biology and unknown role in physiology. Further studies in mice showed that GPR139 was expressed on the same neurons as MOR and counteracted the effects of opioids on neuronal firing.

When researchers administered drugs that activate GPR139, mice dependent on opioid intake stopped taking the drug. Conversely, genetic elimination of GPR139 augmented the pain-killing effects of opioids. The genetically modified mice lacking GPR139 also showed something remarkable--they showed very minimal withdrawal symptoms following chronic exposure to opioids. Withdrawal syndrome, a set of extremely unpleasant symptoms, usually sets in upon the discontinuation of opioids following their prolonged use. This compels people to resume drug-taking, fueling the dependence, another author says. The discovery could point a way toward lessening the suffering associated with opioid, the author says.

"A lot of addicts know that if they stop using, they are going to deal with anxiety, nausea, tremor and they are going to be in a lot of pain. That probably has a very negative impact on people wanting to go into rehab," the author says.

Opioids, a group of drugs that include fentanyl, Vicodin, OxyContin and morphine, are highly effective at blunting severe pain, however prolonged use can create tolerance and dependence. Excessive use can cause overdose.