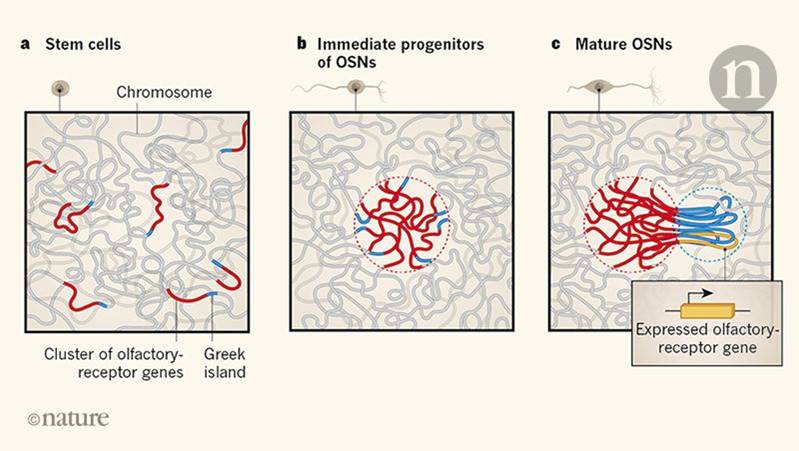 The human nose can distinguish one trillion different scents -- an extraordinary feat that requires 10 million specialized nerve cells, or neurons, in the nose, and a family of more than 400 dedicated genes. But precisely how these genes and neurons work in concert to pick out a particular scent has long puzzled scientists. This is in large part because the gene activity inside each neuron -- where each of these 10 million neurons only chooses to activate one of these hundreds of dedicated genes -- seemed far too simple to account for the sheer number of scents that the nose must parse.

But now, a study in mice has uncovered a striking resourcefulness: by rearranging itself in three-dimensional space, the genome coordinates the regulation of these genes in each neuron, thereby generating the biological diversity needed to detect the scents we experience. The findings were published today in Nature.

"With today's study, we've pinpointed a genomic mechanism by which a finite number of genes can ultimately help distinguish a seemingly near-infinite number of scents," said the paper's senior author.
Smell, also known as olfaction, is mind-bogglingly complex. The receptors in our noses must not only identify a scent, but also gauge how strong it is, scan our memories to determine whether it has been encountered before, and determine if it is pleasing or toxic.

Olfactory receptor neurons, specialized nerve cells that snake from the nose to the brain, make all this possible. And though each neuron contains the full suite of the 400 dedicated olfactory receptor genes, only one of these genes is active in each neuron. Adding to the confusion: the gene that is active appears randomly chosen, and differs from neuron to neuron.

This unusual pattern of gene activity is known as the "one gene per neuron" rule, and has long been a focus of study by scientists. Indeed, deciphering how each olfactory receptor neuron manages to activate only one of these genes -- and how this process results in such a finely tuned sense of smell -- remained mysterious for decades.

Traditionally, it has been thought that genes located on different chromosomes rarely, if ever, interacted with each other. By employing a new genomic sequencing technique called in situ Hi-C, the team recently revealed that the chromosomes interacted much more frequently than expected.

"In situ Hi-C is revolutionary in large part because it allows us to map, in 3D, the entire genome inside a living cell," said the paper's other co-first author. "This gives us a snapshot of the genome at a particular point in time."

Snapshots taken by the researchers showed clusters of olfactory receptor genes, located on different chromosomes, physically moving toward each before choosing an olfactory receptor gene. Soon after these genes huddled together, another type of genetic element known as enhancers clustered in a separate 3D compartment. Enhancers are not themselves genes but regulate the activity of genes.

The team also found that the protein Ldb1 plays a key role in this process. It holds the Greek Islands together as an adaptor, allowing them to switch on a specific olfactory receptor gene (LHX2) that then -- as a team -- interpret the particular scent at hand.

"These teams of genes endow the olfactory system with the ability to  respond in diverse ways," said the author. "The flexibility of this process could help to explain how we easily learn and remember new smells."

Though specific to olfaction, the researchers' findings could have implications for other areas of biology in which inter-chromosome interactions play a role.

"Interactions between chromosomes may be the culprit for shifts in the genome -- called genomic translocations -- that are known to cause cancer," said the author. "Could the activities of other cells be shaped by the three-dimensional changes we see in olfactory receptor neurons? This is an open question that we hope to explore."