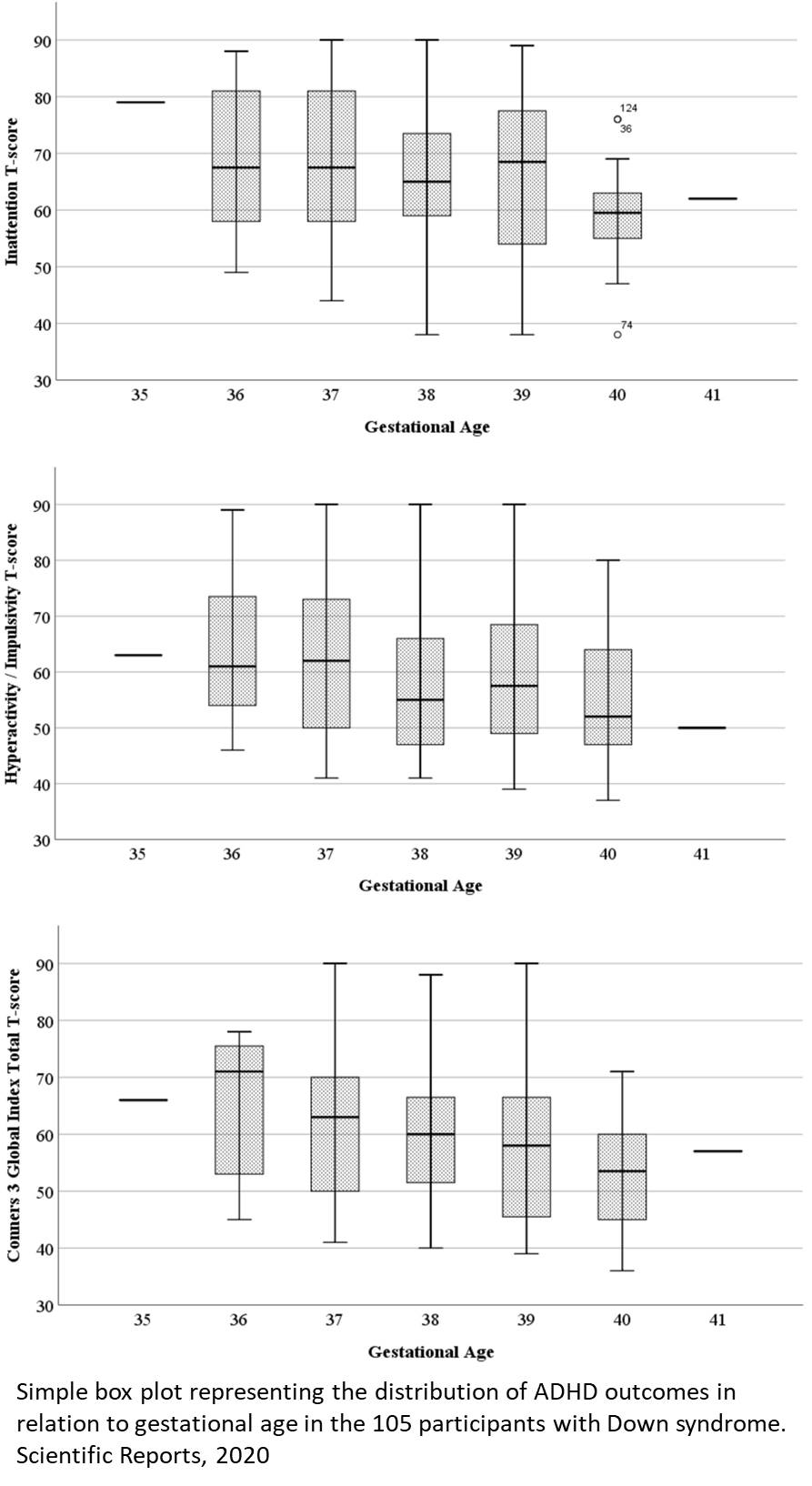 A new study finds a connection between gestational age and attention deficit/hyperactivity disorder (ADHD) symptoms in children with Down syndrome. The research, published in Scientific Reports, focused on children born at 35 weeks gestation or older. It found that earlier gestational age was linked to increased ADHD symptoms later in childhood. Gestational age is the length of time a fetus has developed since the beginning, or gestation, of a pregnancy.

"Despite growing evidence that gestational age predicts later symptoms of ADHD in the general population, this hasn't been studied in children with Down syndrome," said the lead author on the study. "That makes this study meaningful and an important first step to understanding factors related to ADHD symptoms in this population."

The study included 49 boys and 56 girls (6-18 years old) born at least 35 weeks gestation with Down syndrome. The children were part of the Down Syndrome Cognition Project.

The researchers based their study on the children's medical records and questionnaires filled out by their mothers, incorporating well-established measures for ADHD symptoms and intelligence. They found that an earlier gestational age was associated with more symptoms of ADHD, even after adjusting for the child's age and cognitive abilities.

ADHD commonly occurs with Down syndrome. It is generally characterized by inattention, distractibility, poor impulse control and trouble focusing, and it can be difficult to distinguish between symptoms that are due to ADHD and those due to the intellectual disability associated with Down syndrome.

"It's complicated to determine what is a comorbid diagnosis and what is part of the Down syndrome phenotype. That's why it is important to study factors associated with ADHD symptoms in people with intellectual disability," noted the author.

In the study, there was no link between general cognition and ADHD symptoms, reinforcing the separate diagnosis of ADHD.

"It is interesting that gestational age is also related to ADHD symptoms in the general population," said \ a co-author of the study. "So, our findings are consistent with the idea that ADHD is not inherent in Down syndrome, but more likely the result of additional factors."

In their analysis, the researchers considered many factors such as the participants' age, sex, cognitive level, family income, and their mother's education and age at birth. They also completed several analyses to ensure the validity of their results. This included removing children who were taking medication for their ADHD.

The study suggests that ADHD may present in different ways as individuals age. Younger children with Down syndrome generally showed more ADHD symptoms compared to older ones. This is in line with research done in the general population.

"More attention needs to be paid to the care and follow-up of infants born pre-term, even those between 35 and 39 weeks, and perhaps even more so for those with Down syndrome," said the lead. "The implications for early interventions could be significant."