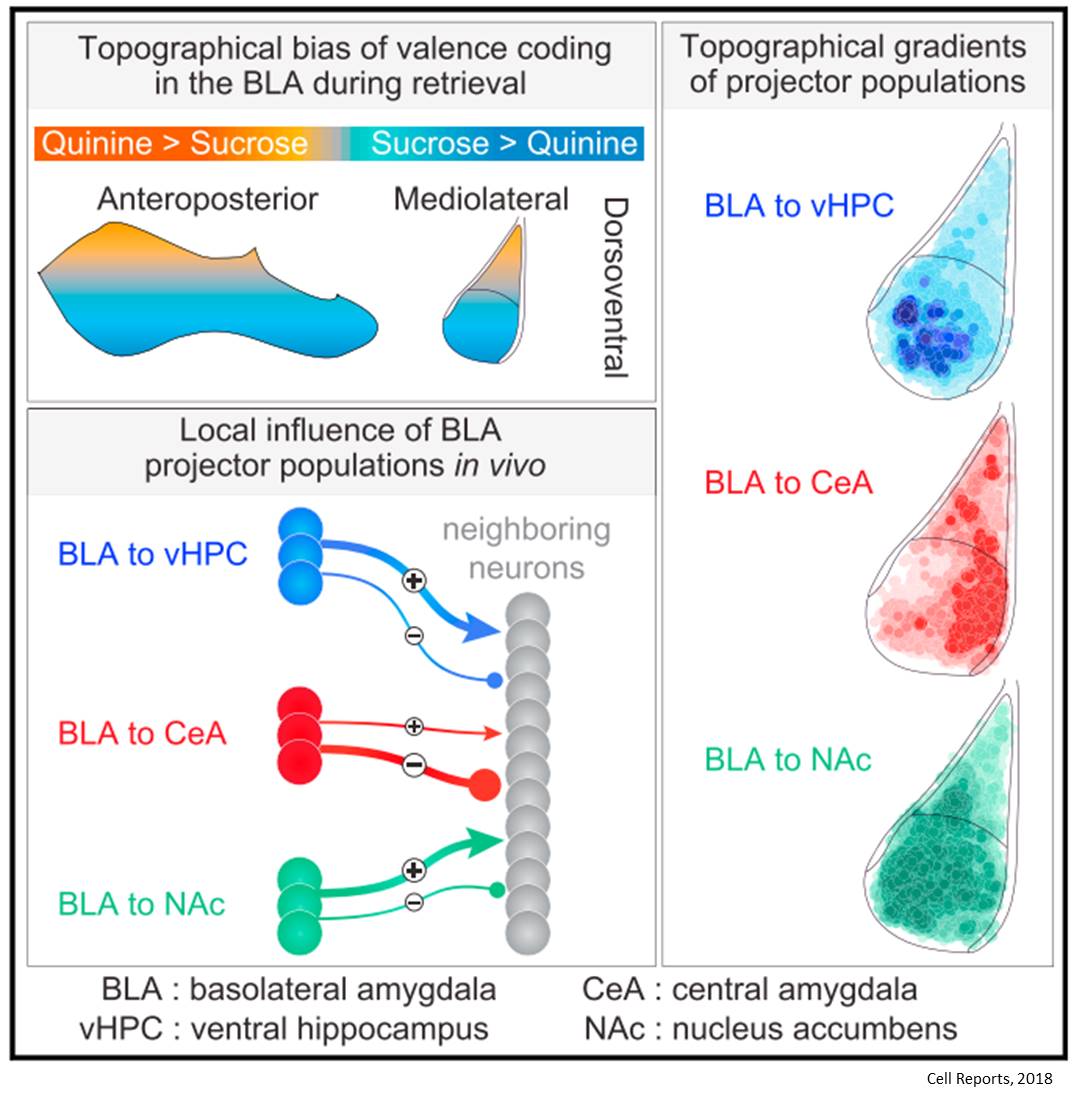 The amygdala is a tiny hub of emotions where in 2016 a neuroscience research team found specific populations of neurons that assign good or bad feelings, or "valence," to experience. Learning to associate pleasure with a tasty food, or aversion to a foul-tasting one, is a primal function key to survival.

In a new study in Cell Reports, the team returns to the amygdala for an unprecedentedly deep dive into its inner workings. Focusing on a particular section called the basolateral amygdala, the researchers show how valence-processing circuitry is organized and how key neurons in those circuits interact with others. What they reveal is a region with distinct but diverse and dynamic neighborhoods where valence is sorted out both by connecting with other brain regions, and also by sparking cross-talk within the basolateral amygdala itself.

"Perturbations of emotional valence processing is at the core of many mental health disorders," says the senior author. "Anxiety and addiction, for example, may be an imbalance or a misassignment of positive or negative valence with different stimuli."

Despite its importance in both healthy behavior and psychiatric disorders, neuroscientists don't know how valence assignment really works. The new study therefore sought to expose how the neurons and circuits are laid out and how they interact.

To conduct the study, lead author led the group in training mice to associate yummy sucrose drops with one tone and nastily bitter quinine drops with another. They recorded the response of different neurons in the basolateral amygdala when the tones were played to see which ones were associated with the conditioned learned valence of the different tastes. They labeled those key neurons associated with valence encoding and engineered them to become responsive to pulses of light. When the researchers then activated them, they recorded the electrical activity not only of those neurons but also of many of their neighbors to see what influence their activity had in local circuits.

They also found, labeled, and made similar measurements among neurons that became active on the occasion that a mouse actually licked the bitter quinine. With this additional step, they could measure not only the neural activity associated with the learned valence of the bitter taste but also that associated with the innate reaction to the actual experience.

Later in the lab, they used tracing technologies to highlight three different kinds of neurons more fully, visualizing them in distinct colors depending on which other region they projected their tendrilous axons to connect with. Neurons that project to a region called the nucleus accumbens are predominantly associated with positive valence, those that connect to the central amygdala are mainly associated with negative valence, and they found that neurons uniquely activated by the unconditioned experience of actually tasting the quinine tended to project to the ventral hippocampus.

To observe the three-dimensional configuration of these distinct neuron populations, the researchers turned the surrounding brain tissues clear using a technique called CLARITY. They were able to make several novel observations about the inner workings of the basolateral amygdala's valence circuitry.

One finding was that the different functional populations of neurons tended to cluster together in neighborhoods, or "hotspots." For example, picturing the almond-shaped amygdala as standing upright on its fat bottom, the neurons projecting to the central amygdala tended to cluster toward the point at the top and then on the right toward the bottom. Meanwhile the neurons that projected to the nucleus accumbens tended to run down the middle and the ones that projected to the hippocampus were clustered toward the bottom on the opposite side from the central amygdala projectors.

Despite these trends, the researchers also noted that the neighborhoods were hardly monolithic. Instead, neurons of different types frequently intermingled creating a diversity where the predominant neuron type was never far from at least some representatives of the other types.

Meanwhile, their electrical activity data revealed that the different types exerted different degrees of influence over their neighbors. For example, neurons projecting to the central amygdala, in keeping with their association with negative valence, had a very strong inhibitory effect on neighbors, while nucleus accumbens projectors had a smaller influence that was more balanced between excitation and inhibition.

The senior author speculates that the intermingling of neurons of different types, including their propensity to influence each other with their activity, may provide a way for competing circuits to engage in cross-talk.

Notably, the research has indicated the projections the different cell types make appear immutable, but the influence those cells have over each other is flexible. The basolateral amygdala may therefore be arranged to both assign valence, and also to negotiate it, for instance in those situations when a mouse spies some desirable cheese, but that mean cat is also nearby.

"This helps us understand how form might give rise to function," senior author says.