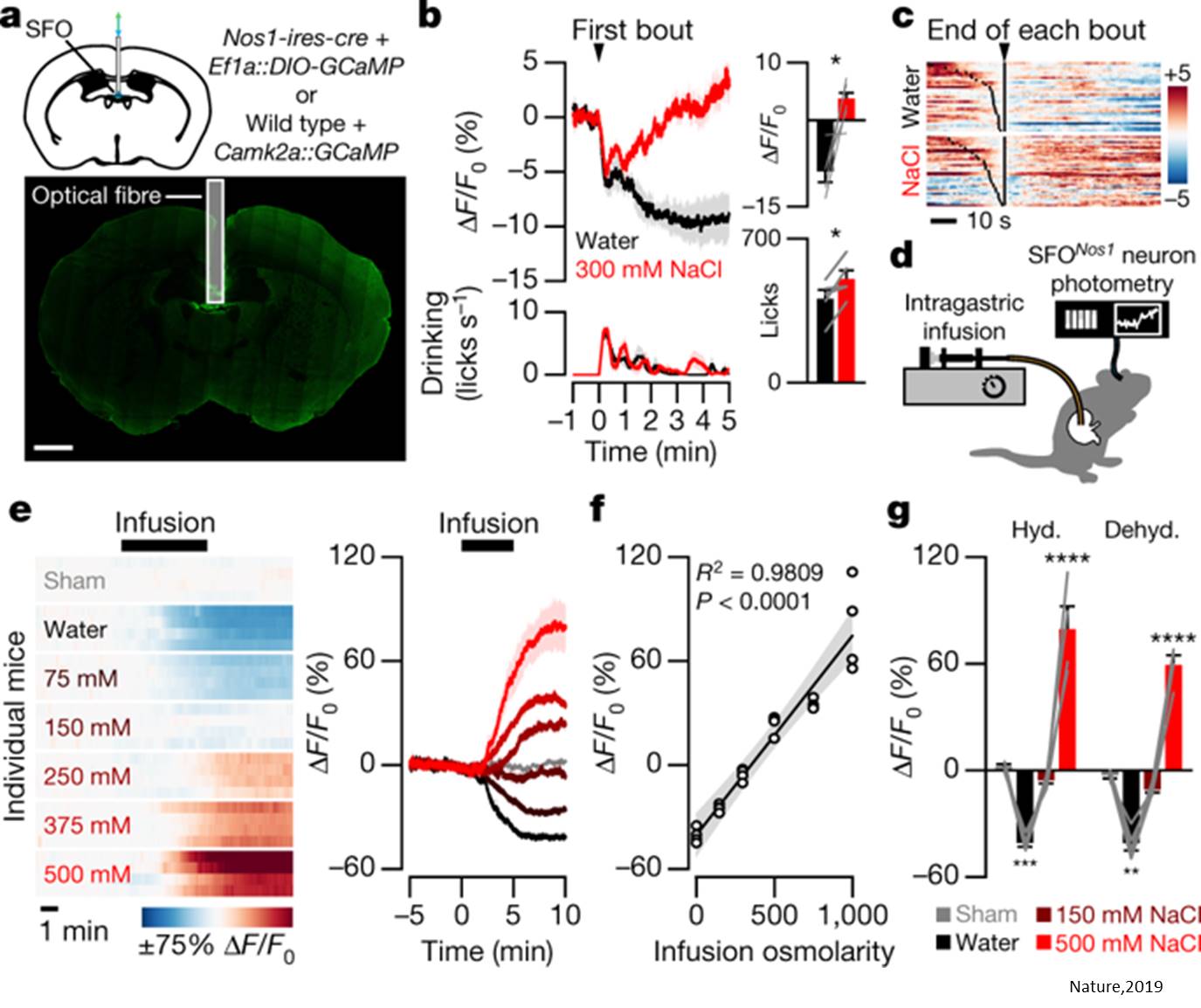 The saltiest solution mice will voluntarily drink tastes roughly half as salty as seawater.

The solution briefly sates the brain cells that control thirst, but then - within a minute - they fire up again, telling mice they're still thirsty. A sip of plain water, though, keeps the same cells silent.

"It was something we just couldn't explain," says the senior author. How does the brain know so quickly whether thirst has been quenched? There had to be a signal that clued in such thirst neurons, the senior author says - something that told them whether a liquid was too salty, or just right.

After three years of investigation, the researchers have discovered that the missing signal comes from the gut. Their work, reported in the journal Nature, reveals how the gastrointestinal tract measures the salt concentration in the intestines and relays this info directly to the brain. By tracking neural activity in living mice, the team watched in real time as these two organs communicated about thirst.

"We've discovered a new way that the gut talks to the brain," says the graduate student.

Scientists have been trying to understand how our bodies regulate thirst for more than a century. Early studies of animals suggested that signals from the body (a parched throat, for instance, or the salt and water content of the blood) could sound a thirst alarm in the brain. In recent decades, researchers have also pointed a finger at the gastrointestinal tract. "But it's really been a mystery what the gut does to regulate thirst - if it's doing anything at all," the senior author says.

The gut, the team discovered in a series of experiments described in their new paper, has a built-in salt sensor that reports to the brain. When the researchers infused plain water directly into the gut, thirst neurons shut off. An infusion of saltwater kept the neurons active. The team observed a direct link between the saltiness of the fluid in the gut and the strength of the signal in the brain.  It involves the vagus nerve and is transmitted to key forebrain neurons that control thirst and vasopressin secretion.

"What's stunning about the finding is that the gut can so precisely measure salt concentration," the senior author says. By mounting miniature microscopes onto the heads of mice, the team pinpointed exactly where in the brain thirst signals from the body are evaluated.

Near the bottom of the brain, inside the hypothalamus, single neurons in the median preoptic nucleus take input from the gut, the throat, and the blood, and calculate whether an animal is thirsty, the team found. "No one had ever observed this happening in a single cell before," the lead author says.

The body's thirst-sensing system is relatively simple, the senior author says. Working out its details could eventually help scientists figure out more complicated systems, like feeding and regulating body temperature.

The team's method of pairing neural recordings in living animals with techniques to manipulate the body a crucial way to observe what's actually going on in the brain. "This is a prototype of the kind of science we're going to be doing in my lab in the years to come," the senior author says.