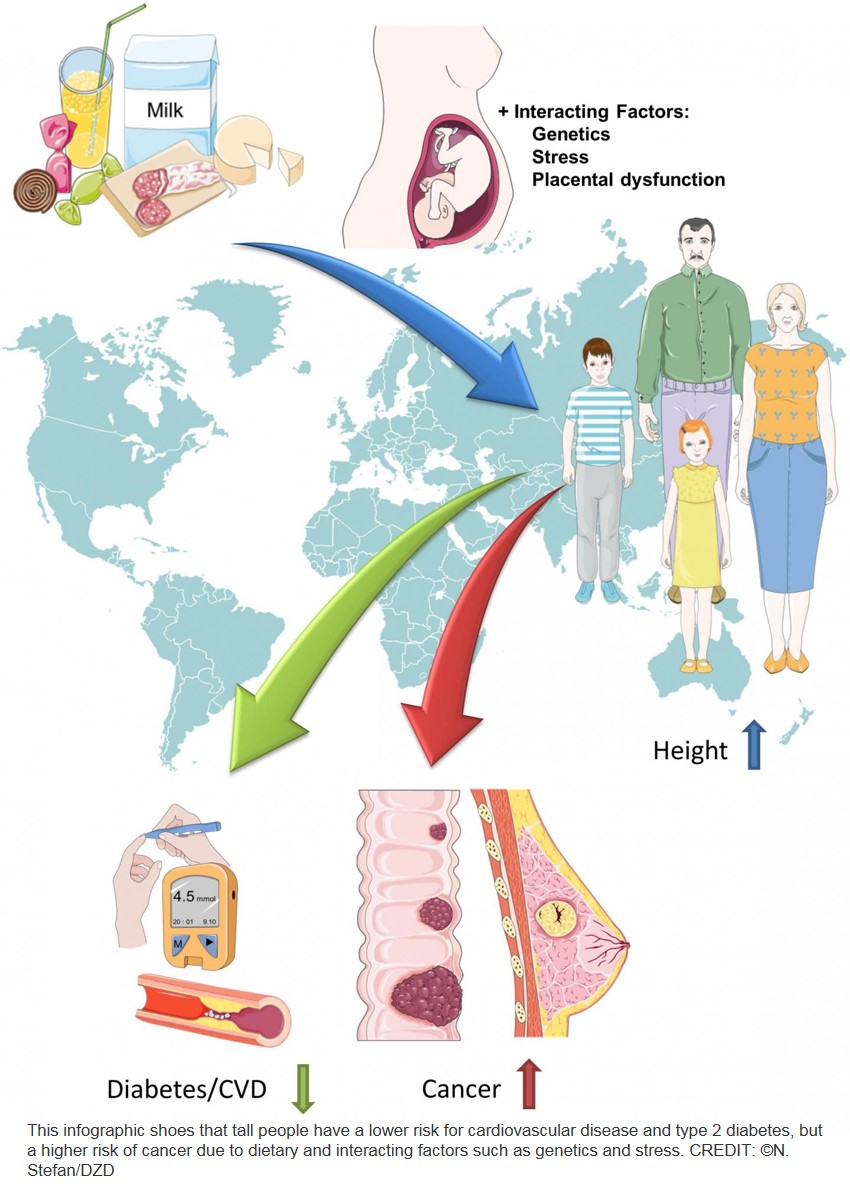 Height is largely genetically determined, but in recent decades the height of children and adults has steadily increased throughout the world: In adulthood the children are almost always significantly taller than their parents. The largest increase in height in recent decades is found in the Netherlands. Dutch men are now 20 cm taller than they were 150 years ago. Interestingly, in the Netherlands the per capita consumption of milk and dairy products is the highest in the world.

The study shows that height has an important impact on the mortality from certain common diseases, irrespective of body fat mass and other modulating factors. Previous studies have shown clearly that tall people, in comparison to short people, have a lower risk of cardiovascular disease and type 2 diabetes but have a higher cancer risk. "Epidemiological data show that per 6.5 cm in height the risk of cardiovascular mortality decreases by six percent, but cancer mortality, by contrast, increases by four percent," Professor said.

The authors suspect that the increase in body height is a marker of over nutrition of high-calorie food rich in animal protein during different stages of growth. Thus, already in utero, lifelong programming might take place that until now has mainly been established for the insulin-like growth factor 1 and 2 and the IGF-1/2 system. Among other consequences, activation of this system causes the body to become more sensitive to insulin action, thus positively influencing the lipid metabolism.

"Accordingly, our new data show that tall people are more sensitive to insulin and have lower fat content in the liver, which may explain their lower risk for cardiovascular disease and type 2 diabetes," Professor added.

These findings fit in with published data that suggest that tall people have relative protection against disorders of the lipid metabolism. However, this activation of the IGF-1/2 system and other signaling pathways may be related to an increased risk of certain cancers, especially breast cancer, colon cancer, and melanoma because cell growth is permanently activated, the authors suspect. The result is an inverse association with the risk of cardiovascular disease and type 2 diabetes, but a positive association with the risk of cancer.

The scientists advocate considering the factor growth and adult height more than hitherto in the prevention of the above-mentioned major diseases. In particular, physicians should be made more aware of the fact that tall people - although less often affected by cardiovascular disease or type 2 diabetes - have an increased risk of cancer. Hitherto, the importance of diet has been underestimated, especially during pregnancy and in children and adolescents.