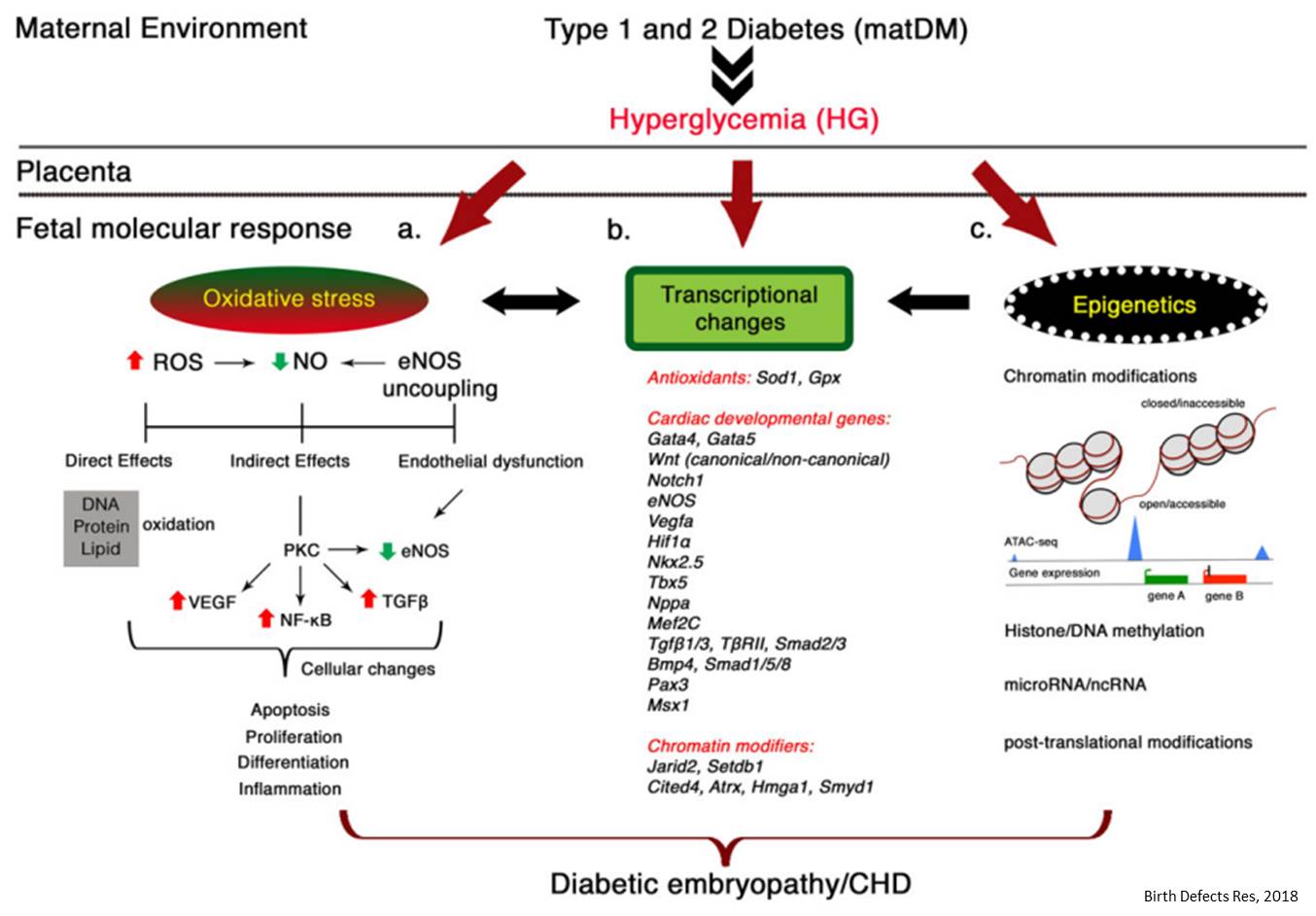 Congenital heart disease (CHD) is the most common birth defect. And even with remarkable advances in care, it remains the leading cause of non-infectious death in infants.

CHD is the result of a complicated interplay between genetic and non-genetic, or "environmental," factors acting on the fetus. While the genetic contributors have become increasingly defined as was recently summarized in an American Heart Association Scientific Statement published in Circulation, the environmental factors are an important area of investigation. One of those environmental factors is maternal hyperglycemia. In a comprehensive review recently published in Birth Defects Research, researchers offer a "state of the science" look at the impact of maternal diabetes, and potential gene-environmental influences in that context, on fetal heart development.

"Many epidemiological studies have demonstrated a strong correlation between maternal diabetes and increased risk of CHD in babies born to affected mothers," says the author. "And many factors, including the type of diabetes, other environmental influences, and potentially certain genetic predispositions can influence which CHD subtypes are likely to develop."

For example, type 1 and type 2 diabetes are linked with specific CHD subtypes. Babies born to mothers with type 1 diabetes had a greater association with conotruncal malformations and atrioventricular septal defects. Those born to mothers with type 2 diabetes had the highest risk of heterotaxy and left ventricular outflow tract obstructive malformations. Both types of maternal diabetes also increased the risk of other types of CHD in the infants, including right ventricular outflow tract obstructive malformations and atrial and ventricular septal defects, albeit to lower levels.

Diabetes is a complex disease, with abnormal homeostasis of multiple components in metabolism that ultimately lead to the overall metabolic syndrome. Despite this complexity, hyperglycemia has been determined to be the primary teratogen in all forms of diabetes. How exactly maternal hyperglycemia causes birth defects in infants is still unknown, however-

"The underlying molecular mechanisms by which alterations in maternal glucose levels act to cause the congenital heart defects are actively under investigation in our lab and others," says another author. "We suspect that this gene-environment interaction is related to the dysregulation of specific epigenetic processes in the fetal heart."

According to the review, the current evidence points to the following processes and pathways:

"We think that maternal diabetes can ultimately affect the levels at which genes are expressed during fetal development," says the author.

"Teasing out the cellular and molecular changes in the developing heart during hyperglycemic conditions is possible with newer high throughput genomic technologies," the author adds. "Doing so will enable us to define these perturbations mechanistically, and even down to a single-cell level."

Unlocking these cellular secrets opens the door to potential interventions to reduce the risk of the fetus developing CHD.

"Ultimately, our hope is to translate these findings by screening mothers with environmental risk factors and their children for genetic variants in cardiac regulatory genes," says the another author. "We predict that these genetic variants will serve as risk factors for the development of CHD in high-risk populations, such as those with maternal diabetes."