High-energy lasers could be used break the amyloid fibrils 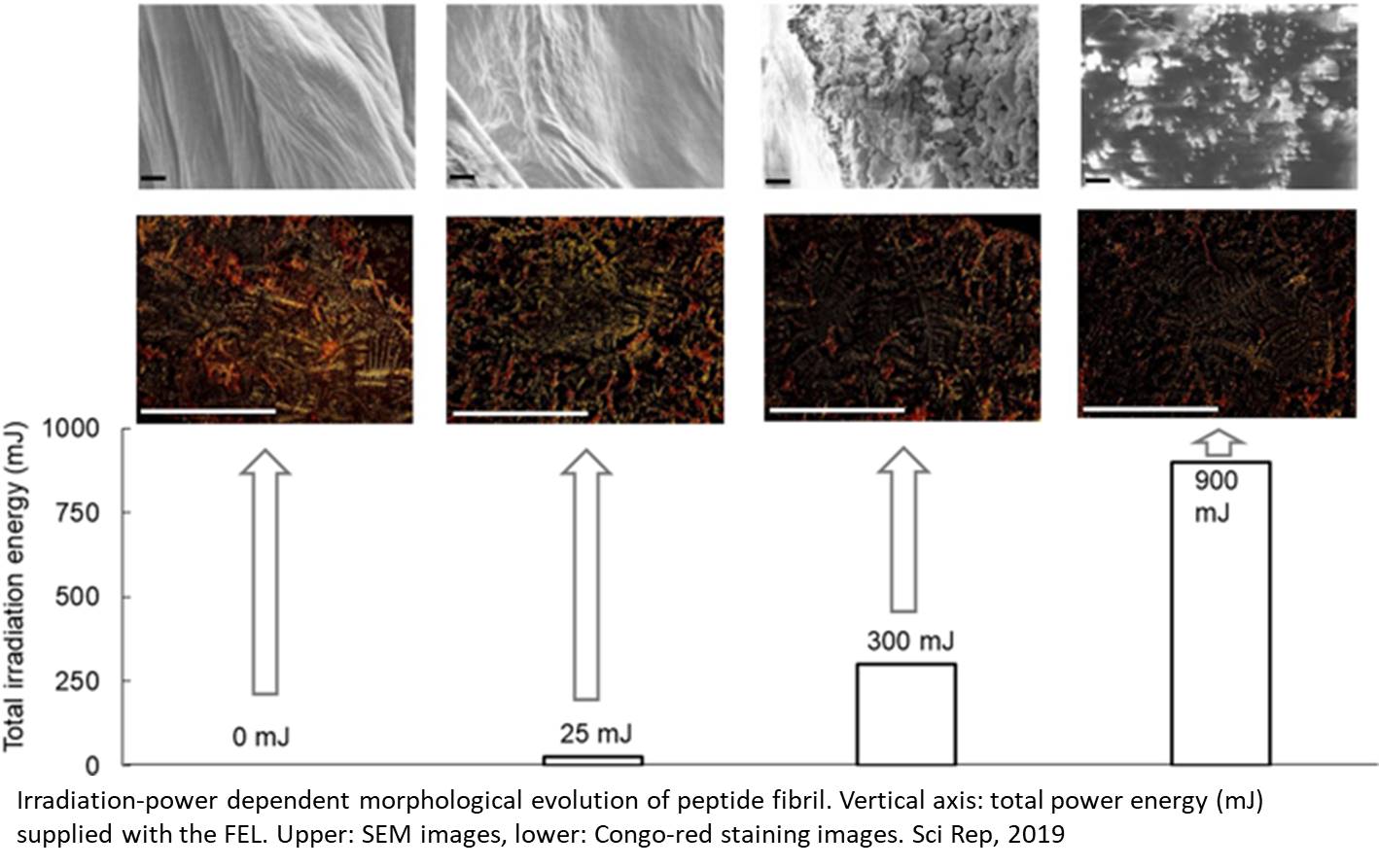 Amyloid fibrils are a type of self-assembled proteins/peptides that take on a stacked sheet-like formation. Amyloid fibril aggregates are known to be a cause of several diseases--including Alzheimer's--and therefore, it is of immense scientific interest to understand how these aggregates can be broken.

Some types of amyloid fibrils also play a role in regulation of gene expression in some organisms. It is also thought that the fiber-like formats appearing in these aggregates act as scaffolds on which to cultivate biomaterials. Therefore, a suitable technique for breakdown or "dissociation" of amyloid protein fibrils is critical from the perspective of medical treatment, modification of biological structures and functions, and even biomaterial engineering.

A collaborative group has now shown that a far-infrared (FIR) free-electron laser (FEL), called FIR-FEL, can be used to break down amyloid protein aggregates, which is a testament to the power of interdisciplinary scientific research. This study has been published recently in Scientific Reports.

Previous studies have investigated the dissociation of amyloid fibrils but with limited success and mixed results. Because their dissociation in water is difficult, physical methods of dissociation have been explored in the past. Lasers and electromagnetic radiation have been used for fabrication and structural/functional alteration of chemical and biological materials.

Among lasers, the FIR-FEL has been studied very sparsely, although it has high penetration power and is absorbed well by biological systems. It is also used in tissue imaging, cancer diagnostics, and biophysics studies. The senior author explains, "Our study shows for the first time that FIR-FEL is also useful for breaking down the fibril aggregate structure of proteins."

For their study, the researchers used the 5-residue peptide DFKNF as the model because the link between its fibrillation and pathogenesis is already established. This peptide auto-assembles into a fibril sheet. They found that FIR-FEL damaged the rigid β-sheet conformation (one of the few structures that proteins assume) of the 5-residue peptide by creating small holes on the peptide film. The researchers found that FIR-FEL also disrupts the hydrogen bonds between adjacent β-sheets in the fibril and gives rise to free peptides. This is referred to as dissociation.

The team then checked for conformational changes in the peptide fibril after irradiation with FIR-FEL, by analyzing the ratios of 4 types of secondary structures of peptides (α-helix, β-sheet, β-turn, and other). They found that the proportion of the β-sheet conformation was drastically reduced, which suggests that the rigid sheet-like structure of the fibril was disrupted.

The senior author states that a previous study had also found mid-infrared (MIR)-FEL to be effective in this regard. "We compared the effects of MIR-FEL with those of FIR-FEL," says the author, "and we found that although MIR-FEL caused conformational changes in the fibril aggregates, it did not break down the fibrils as affectively as FIR-FEL did."

Using scanning electron microscopy and dye staining techniques, the researchers also confirmed that FIR-FEL causes morphological changes in the fibrils. The senior author says, "Because amyloid fibril peptides are involved in regulation of biological functions as well as pathologies, physical modification techniques (like FIR-FEL) could also be used to alter the biological functions of these macromolecules as needed."

As FIR-FEL is more effective than MIR-FEL, FIR-FEL can be used to destroy amyloid fibrils deep inside tissues, as in the case of Alzheimer's disease, whereas MIR-FEL can be used for removing dermal amyloids on the surface of the skin. Also, because fibril proteins act as scaffolds for biocompatible materials, FIR-FEL could be used in biomaterial engineering in regenerative medicine or Nano carrier drug-delivery systems.

To conclude, the senior author eloquently states, "For the first time in the world, we have found that a rigid aggregate of amyloid fibrils can be effectively broken down using a free-electron laser in the terahertz region (wavelength 50-100 micrometers). Our next step would be to understand how FIR-FEL affects different types of peptide fibrils. Our research can fuel the development of novel treatments for intractable diseases such as Alzheimer's. It could also aid the development of new methods for manipulating the structure of biocompatible materials."