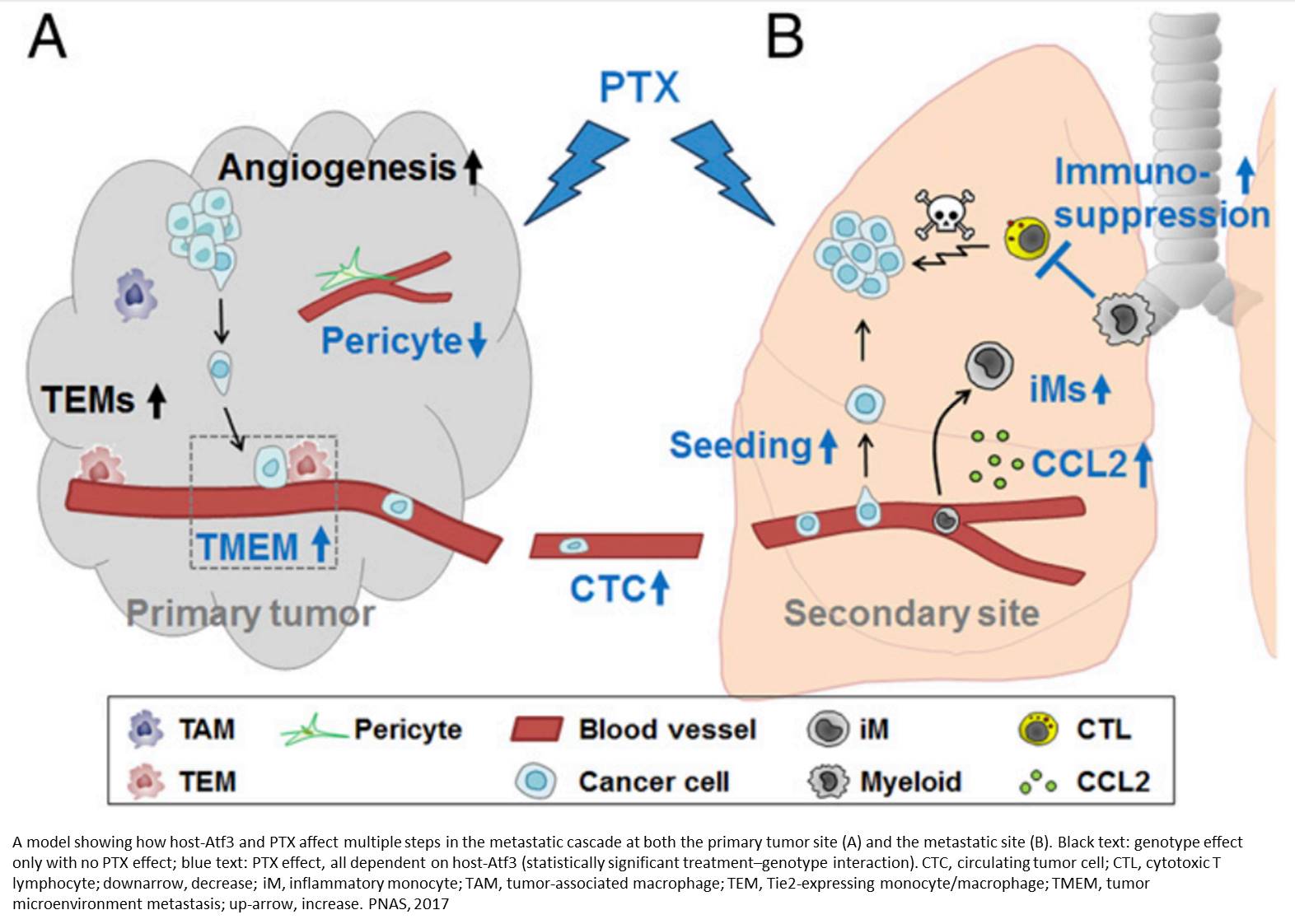 The very same treatment that thwarts breast cancer has a dark side -- it can fuel the spread of the disease to the lungs.

The front-line chemotherapy drug paclitaxel sets off a variety of molecular-level changes that allow breast cancer cells to escape from the tumor. At the same time, it creates an environment in the lung that is more hospitable to the cancer cells, facilitating the spread of the disease, the researchers found in a mouse model of breast cancer.

The study, which appears in the journal Proceedings of the National Academy of Sciences, includes an analysis of data from women with breast cancer that suggest the findings from mouse models could be relevant to breast cancer metastasis in humans.

"That chemotherapy can paradoxically promote cancer progression is an emerging revelation in cancer research. However, a molecular-level understanding of this devastating effect is not clear," said the study's senior author.

The changes in both the tumor and the lung documented in the study depend on a gene called Atf3, which is turned on by stress. In human data, the researchers found higher Atf3 gene expression in patients who had chemotherapy than those who did not.

"This gene seems to do two things at once: essentially help distribute the 'seeds' (cancer cells) and fertilize the 'soil' (the lung)," senior author said.

First, the chemo appears to send signals to increase the number of molecular doors through which the cancer cells can escape from the primary tumor into the bloodstream, freeing them to travel to other organs, the researchers found. Paclitaxel (PTX) increased the circulating tumor cells in the blood and enhanced the metastatic burden at the lung. At the primary tumor, PTX increased the abundance of the tumor microenvironment of metastasis, a landmark microanatomical structure at the microvasculature where cancer cells enter the blood stream. Importantly, these changes in the primary tumor and the metastatic lung were all dependent on Atf3, a stress-inducible gene, in the noncancer host cells.

This finding is bolstered by another recent study published in Science Translational Medicine, which showed a similar result using imaging techniques to observe the tumor in mice, senior author said.

Second, the researchers found that, beyond aiding cancer cell escape, paclitaxel creates a cascade of events that makes the tissue environment in the lung fertile ground for circulating cancer cells. These changes include increased inflammatory monocytes and reduced cytotoxicity."There are signals that help cancer cells enter the lungs and set up shop, that make the environment more immunologically tolerant to cancer cells," senior author said.

"At this point, what our study and the recent literature on chemotherapy taught us is that it is prudent to keep our mind open, realizing that chemo can help treat cancer, but at the same time may increase the possibility of the spread of that cancer," senior author said.

What set their study apart from other research in this area is the identification of the stress gene Atf3. They showed that paclitaxel -- a stressor -- exerts its pro-cancer effect at least in part by turning on Atf3.

"It's possible there could be a treatment given in conjunction with the chemo that would inhibit this problem by dampening the effect of the stress gene Atf3," senior author said.