How brain organizes action into sequences? 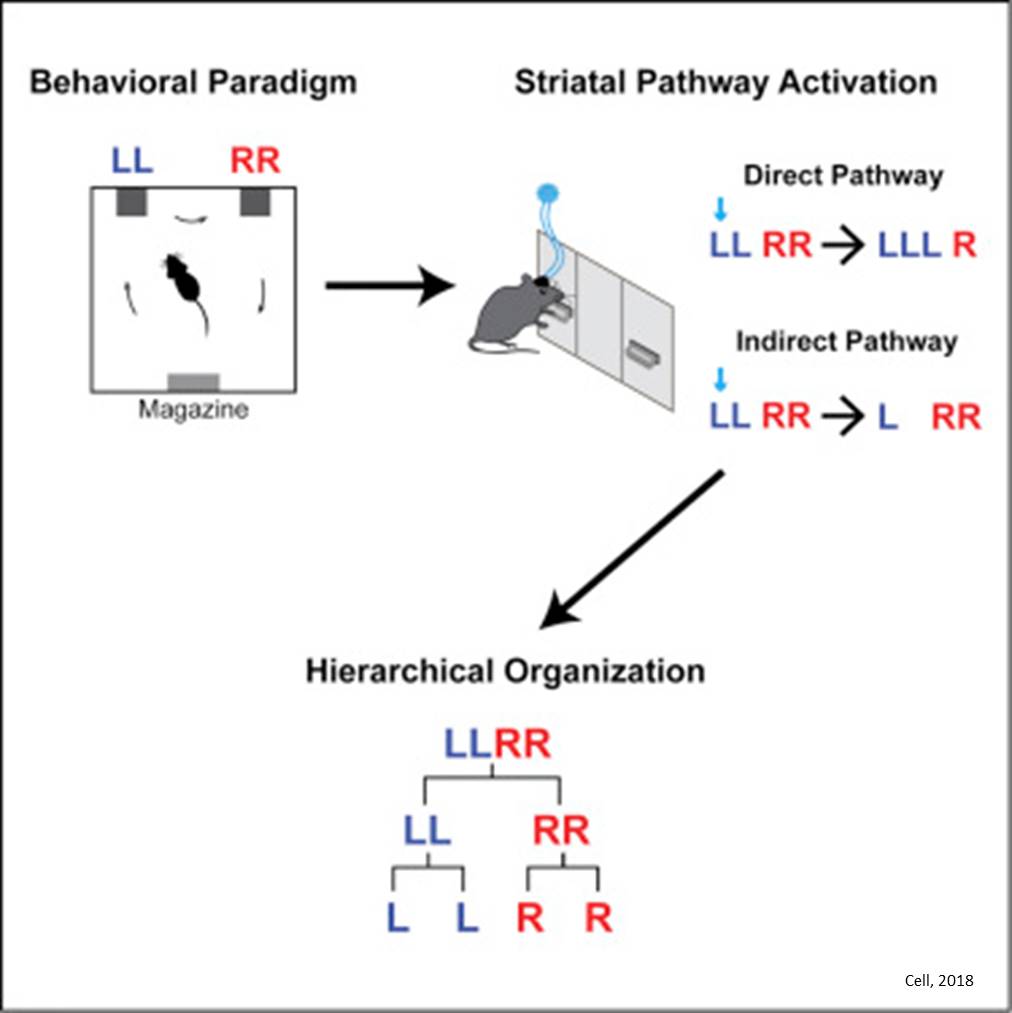 Driving to work, typing an email or playing a round of golf--people perform actions such as these throughout the day. But neuroscientists are still unsure how the brain orchestrates complex actions or switches to a new action--behaviors that are impaired in disorders such as Parkinson's disease or obsessive-compulsive disorder (OCD).

Now, researchers have resolved a longstanding scientific debate about how behavior is organized in the brain. The team discovered that learned behavior is organized in a hierarchy with multiple levels of control, offering possible new therapeutic targets for disorders that involve an inability to control one's actions. The work, which appeared in the journal Cell, utilized mice trained to perform complex action sequences to make the discovery.

"For many decades, scientists have been debating how the brain organizes behavior," says the study's senior author. "Using optogenetics, a technique that uses light to manipulate brain cells' activity, we were able to change individual actions that the animals were planning to perform, revealing this precise level of neural control."

When you learn a new behavior--such as tying your shoelaces--a brain region called the striatum orchestrates the series of actions: bending down, grabbing the laces, and tying the knot. Scientists have long debated whether these types of steps are organized in a chain, with each step triggering the next (like falling dominoes) or whether there is a more hierarchical system at work, with multiple levels of control (like an office organization chart).

Over several weeks, the team trained mice to carry out a series of lever presses. In a custom-built box with a lever to the left and a lever to the right, the mice learned that pressing the levers in the specific order of left-left-right-right yielded a treat. (The team named this series "the penguin dance" after a line dance sometimes performed at weddings or parties.)

While the mice performed the penguin dance sequence, a computer recorded the activity of two specific types of brain cells: D1 and D2 neurons, which make up the majority of cells in the striatum and have been implicated in learning and performing actions. The researchers used optogenetics to activate these neurons with laser light and diphtheria toxin to inactivate them, allowing the team to identify and isolate how D1 and D2 cells control behavior.

By manipulating D1 or D2 neurons at precise points during performance of the penguin dance, the researchers were able to piece together how the sequence was learned and organized by the brain. They also discovered unexpected mixtures of the neurons working in tandem to drive or suppress behavior.

"Neurons are like snowflakes," says the paper's first author. "D1 and D2 neurons have certain similar patterns, but they don't all do exactly the same thing. There's a complexity to how they work together to control movement."

The team found evidence for three levels of control in neuronal activity. The lowest level represented activity with each individual step in the action sequence, while the highest level represented activity only when starting or stopping the overall sequence. At an intermediate level, neurons were active only during the animals' switch from one action to another. It's akin to an employee's supervisor overseeing every task versus a senior executive who mostly monitors whether a project was begun or completed. In between are the organization's middle managers, operating amid the other two.

The work reveals a subtle complexity to neuronal behavior in the striatum that may help explain why the learned actions we perform remain so flexible--our brain's supervisors, middle managers and senior executives can update our behaviors to respond to challenges in our ever-changing environment.

Adds the author, "I'm particularly excited about this study because it solves a long-standing debate for a fundamental question in behavioral neuroscience. At the same time, by identifying how different cell types in the brain control our behavior, it provides new insight into potential treatments for different neurological diseases."