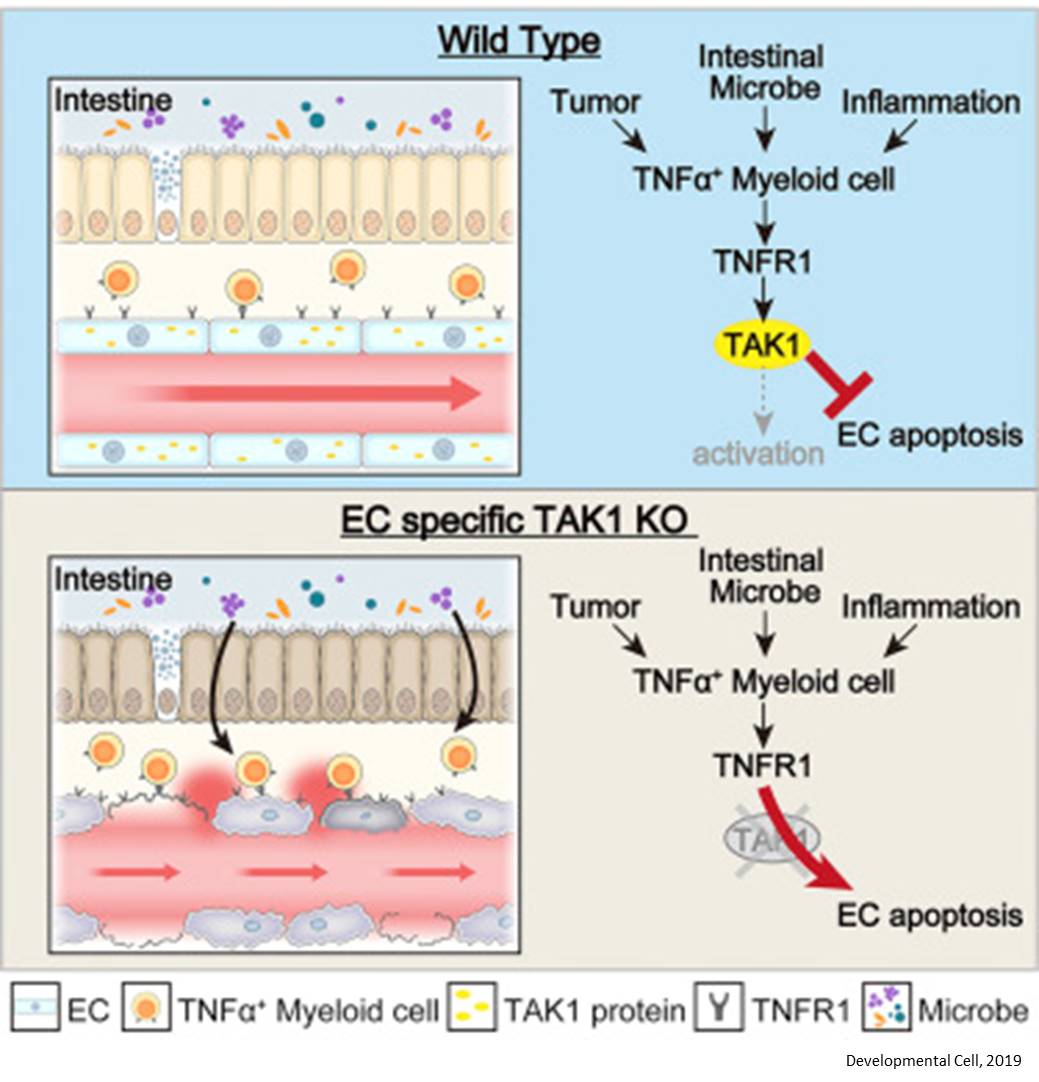 Cell death is an important aspect of tissue homeostasis, as well as inflammation and disease pathogenesis related to infection, injury, and tumor growth. Tumor necrosis factor-α (TNFα) coordinates cell death in a variety of tissues; however, endothelial cells within blood vessels show a unique resistance to the action of TNFα. This resistance has been poorly understood, until now.

In a new study published in Developmental Cell, a research team investigated the mechanism underlying endothelial cell resistance to TNFα-induced apoptosis, an important mechanism of cell death in inflammatory conditions. They found that TAK1, a known signaling messenger involved in tissue homeostasis, was essential for survival of endothelial cells upon exposure to TNFα.

TNFα-induced cell death is tightly regulated and resisted in endothelial cells, which use TNFα exposure as a signal to exit the stationary "resting state" and become active and start inflammation. Despite a variety of research efforts, this resistance mechanism has remained ambiguous. Here, the researchers used a unique type of mouse, in which TAK1 could be deleted in specific tissues, to show that TAK1 is an essential component in ensuring survival of endothelial cells during inflammation and injury.

"We found that deletion of TAK1 blocked the ability of intestinal endothelial cells to disregard monocyte and macrophage inflammatory TNFα signaling induced by intestinal microbiota, resulting in hemorrhage within the intestine and liver," says corresponding author. "Thus, the presence of TAK1 safeguarded the survival of endothelial cells in these tissues."

In the study, in vivo experiments with inflammation model mouse revealed that TAK1 was essential for survival of endothelial cells in lung tissue and hind limb muscle, under conditions similar to pneumonia and myositis.

"We suspected that inflammation in tumor tissues may be a powerful weapon to destroy tumor vasculature," says lead author. "We found that, in tumor in which TNFα is expressed abundantly, localized deletion of TAK1 resulted endothelial cell death and thereby tumor regression, suggesting that TAK1 may be a useful target in anti-angiogenic therapy."

In addition to providing a clear understanding of endothelial cell survival during inflammation, this study has revealed a potential pathway for other cell types to avoid the onset of apoptosis, and may be important in future regenerative medicine therapies.