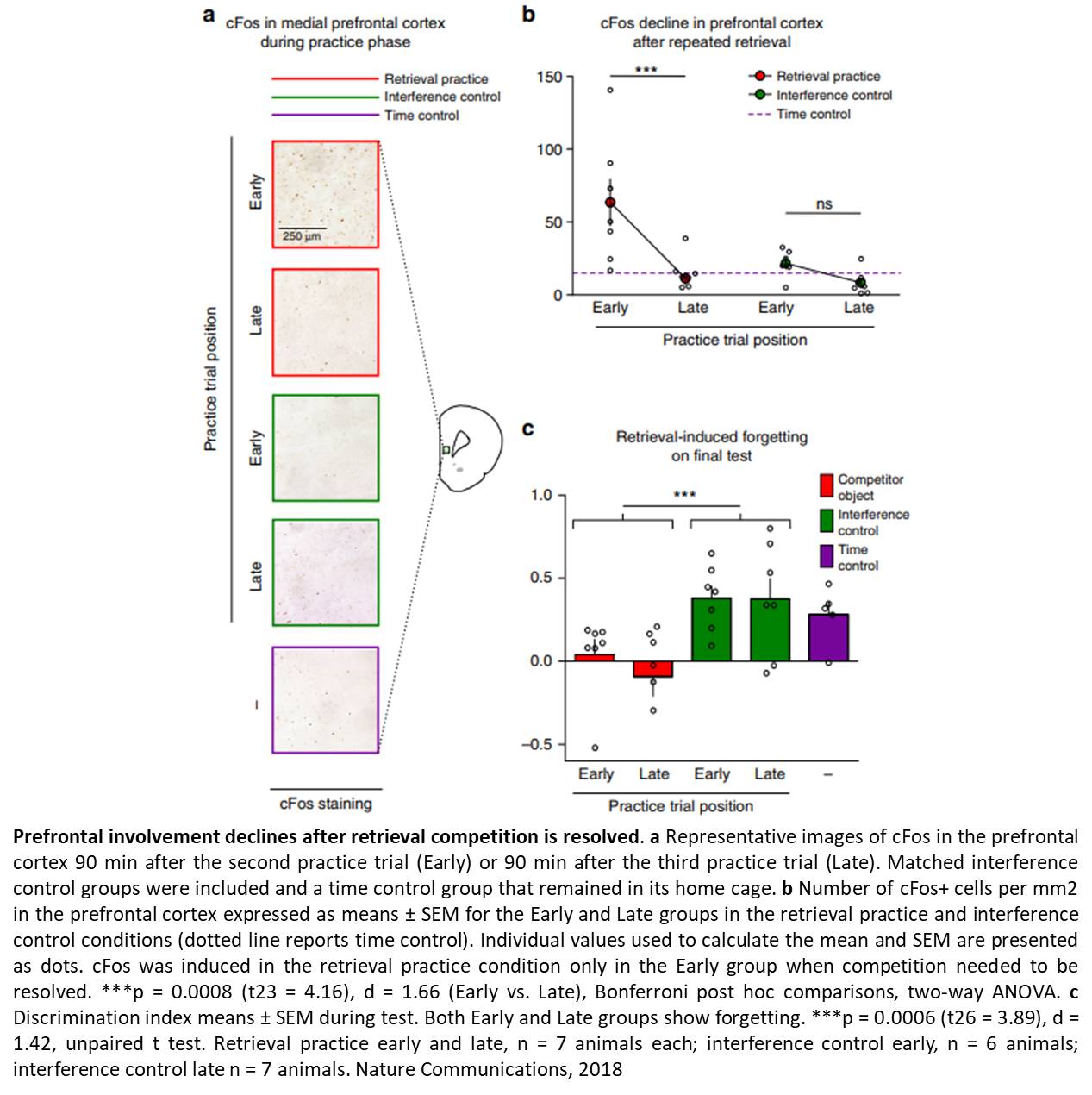 Our ability to selectively forget distracting memories is shared with other mammals, suggests new research. The discovery that rats and humans share a common active forgetting ability - and in similar brain regions - suggests that the capacity to forget plays a vital role in adapting mammalian species to their environments, and that its evolution may date back at least to the time of our common ancestor.

The human brain is estimated to include some 86 billion neurons (or nerve cells) and as many as 150 trillion synaptic connections, making it a powerful machine for processing and storing memories. We need to retrieve these memories to help us carry out our daily tasks, whether remembering where we left the car in the supermarket car park or recalling the name of someone we meet in the street. But the sheer scale of the experiences people could store in memory over our lives creates the risk of being overwhelmed with information. When we come out of the supermarket and think about where we left the car, for example, we only need to recall where we parked the car today, rather than being distracted by recalling every single time we came to do our shopping.

Previous work showed that humans possess the ability to actively forget distracting memories, and that retrieval plays a crucial role in this process. The group has shown how intentional recall of a past memory is more than simply reawakening it; it actually leads us to forget other competing experiences that interfere with retrieval of the memory we seek.

"Quite simply, the very act of remembering is a major reason why we forget, shaping our memory according to how it is used," says the senior author.

"People are used to thinking of forgetting as something passive. Our research reveals that people are more engaged than they realise in actively shaping what they remember of their lives. The idea that the very act of remembering can cause forgetting is surprising and could tell us more about people's capacity for selective amnesia."

While this process improves the efficiency of memory, it can sometimes lead to problems. If the police interview a witness to a crime, for example, their repeated questioning about selected details might lead the witness to forget information that could later prove important.

Although the ability to actively forget has been seen in humans, it is unclear whether it occurs in other species. Could this ability be unique to our species, or at least to more intelligent mammals such as monkeys and great apes?

In a study published in the journal Nature Communications, researchers have shown that the ability to actively forget is not a peculiarly human characteristic: rats, too, share our capacity for selective forgetting and use a very similar brain mechanism, suggesting this is an ability shared among mammals.

To demonstrate this, the researchers devised an ingeniously simple task based on rats' innate sense of curiosity: when put into an environment, rats actively explore to learn more about it. When exploring an environment, rats form memories of any new objects they find and investigate.

Building on this simple observation, the researchers allowed rats to explore two previously-unseen objects (A and B) in an open arena - the objects included a ball, a cup, small toys, or a soup can. Rats first got to explore object A for five minutes, and then were removed from the arena; they were then placed back in the arena 20 minutes later with object B, which they also explored for five minutes.

To see whether rats showed retrieval-induced forgetting, like humans, rats next performed "retrieval practice" on one of the two objects (e.g. A) to see how this affected their later memory for the competitor object (B). During this retrieval practice phase, the researchers repeatedly placed the rat in the arena with the object they wanted the rat to remember (e.g. A), together with another object never seen in the context of the arena. Rats instinctively prefer exploring novel objects, and so on these "retrieval practice" trials, the rats clearly preferred to explore the new objects, implying that they indeed had remembered A and saw it as "old news".

To find out how repeatedly retrieving A affected rats' later memory for B, in a final phase conducted 30 minutes later, the researchers placed the rat into the arena with B and an entirely new object. Strikingly, on this final test, the rats explored both B and the new object equally - by selectively remembering their experience with A over and over, rats had actively trained themselves to forget B.

In contrast, in control conditions in which the researchers skipped the retrieval practice phase and replaced it with an equal amount of relaxing time in the rats' home cage, or an alternative memory storage task not involving retrieval, rats showed excellent memory for B.

The team then identified an area towards the front of the rat's brain that controls this active forgetting mechanism. When a region at the front of the rat's brain known as the medial prefrontal cortex was temporarily 'switched off' using the drug muscimol, the animal entirely lost its ability to selectively forget competing memories; despite undergoing the same "retrieval practice" task as before, rats now recognised B. In humans, the ability to selectively forget in this manner involves engaging an analogous region in the prefrontal cortex.

"Rats appear to have the same active forgetting ability as humans do - they forget memories selectively when those memories cause distraction," says the senior author. "And, crucially, they use a similar prefrontal control mechanism as we do. This discovery suggests that this ability to actively forget less useful memories may have evolved far back on the 'Tree of Life', perhaps as far back as our common ancestor with rodents some 100 million years ago."

The senior author says that now that we know that the brain mechanisms for this process are similar in rats and humans, it should be possible to study this adaptive forgetting phenomenon at a cellular - or even molecular - level. A better understanding of the biological foundations of these mechanisms may help researchers develop improved treatments to help people forget traumatic events.