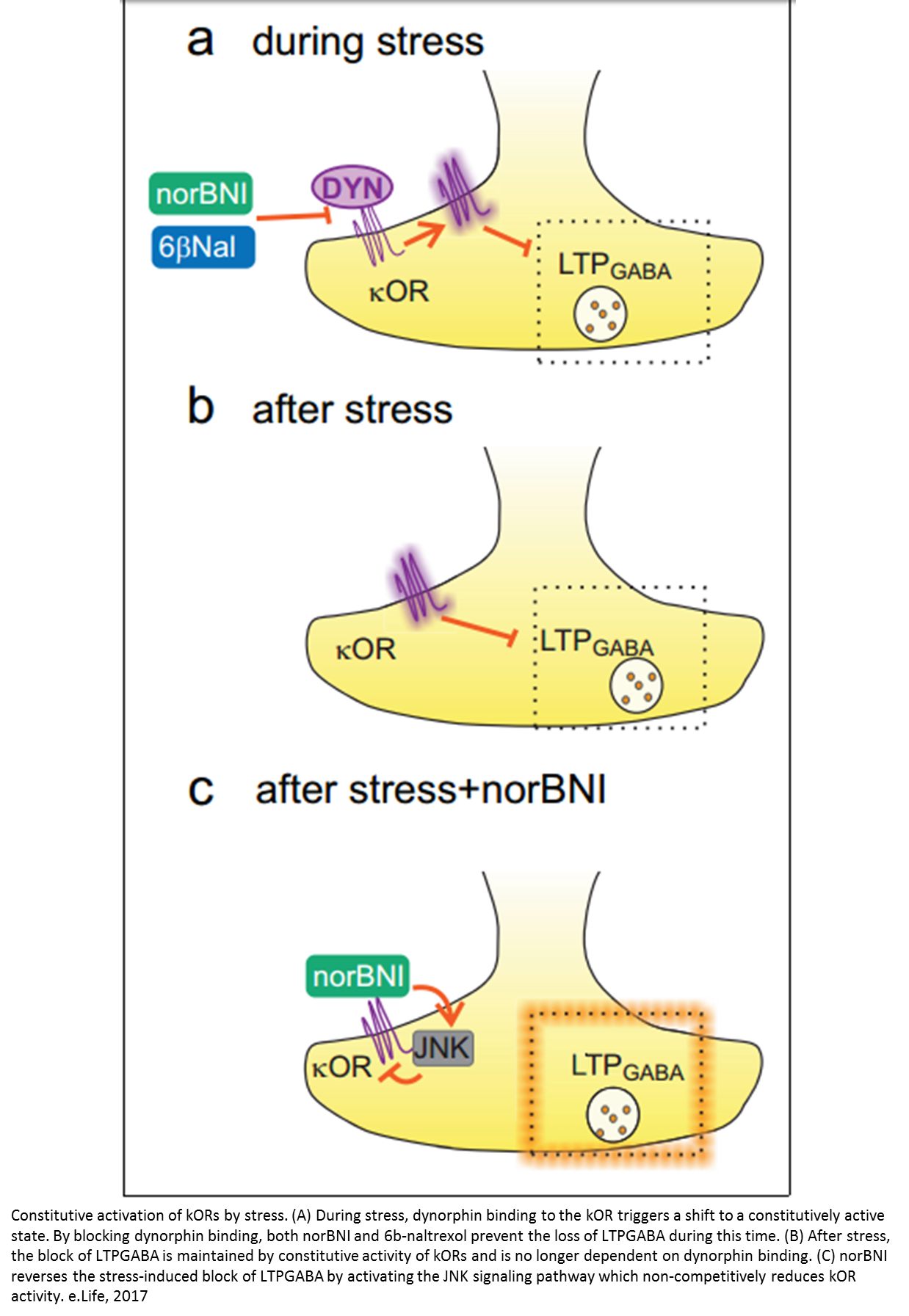 A heartbreaking phenomenon of addiction is that just a brief stressful episode can trigger relapse. In a detailed new cocaine addiction study conducted in rat models, which closely parallel human addictive behavior, scientists have identified what appears to be taking place in the mammalian brain to make that happen and uncovered the molecular biology that allows them to switch the stress-induced relapse back off.

The findings, published in the journal eLife, suggest a new way to develop medicines to combat relapse, even a day or so after stress has occurred.

"That's so critical because you don't want to be taking medication all the time in anticipation of stress," said senior author.

At the heart of the study are kappa opioid receptors (κORs) on the surface of key brain cells. The κORs are already seen as targets for anti-addiction medication development, but to make effective therapies, researchers must pinpoint specific interactions. In the new study, the team of scientists made observations both in behaving rats and in rat brain tissue to focus on how stress appears to trigger these receptors to cause relapse, how that relapse remains sustained and how that effect can be disrupted.

The study focused on the ventral tegmental area (VTA), where the brain reinforces behaviors related to fulfilling basic needs. Sometimes those are healthy needs, like food, but they can also be cravings for drugs, alcohol or nicotine. Within the VTA, the reward for fulfilling needs is mediated by neurons that pump out the neurotransmitter dopamine. Those neurons are curbed, however, by the inhibitory neurotransmitter GABA, through connections to other neurons called synapses.

Neuroscientists have known that, as in people, stress induces relapse in rats. One mechanism is the release of a protein called dynorphin that naturally activates κORs. The new study provides evidence that after brief acute stress, dynorphin triggers a long-lasting change in the conformation of the receptors, specifically on the GABA-releasing synapses that inhibit dopamine-releasing neurons in the VTA.

This specific change, the results suggest, serves to disrupt GABA's ability to hold back the dopamine neuron activity that may drive cocaine-seeking. Once the conformational change is made in the κORs, the researchers found, that relapse-promoting change stays in effect for days without any additional stress or any continued need for dynorphin.

That κORs continue to behave the same way for days even after just one brief stimulus is a new finding in neuroscience, the authors wrote: "Ours is the first demonstration of experience-induced changes in constitutive activity of these receptors."

In a previous paper, the researchers showed that the chemical norBNI could end the relapse. In the new paper, they showed that they could reverse relapse with norBNI in the rats even a full day after stress.

Now they also know more about how that works. In a key experiment in the new study, they showed that norBNI activates a molecular pathway in the neurons called JNK (pronounced "junk") to restore the kORs to their normal conformation that does not exhibit sustained signaling. They also showed that merely blocking dynorphin from binding to κORs did not restore GABAergic neuron activity and would therefore not be a productive drug development strategy.

In human pharmacology, senior author acknowledged, norBNI is not favored because its effects persist for weeks and could cause unwanted side effects, but that's why it's helpful to know that it exploits the JNK pathway to do its work.

"JNK is going to be an important future avenue to go down," senior author said. "Maybe you could use something other than norBNI to drive JNK."

That, in turn, could someday provide people who have recovered from cocaine addiction with a medicine that prevents to the return of cravings because of stress.