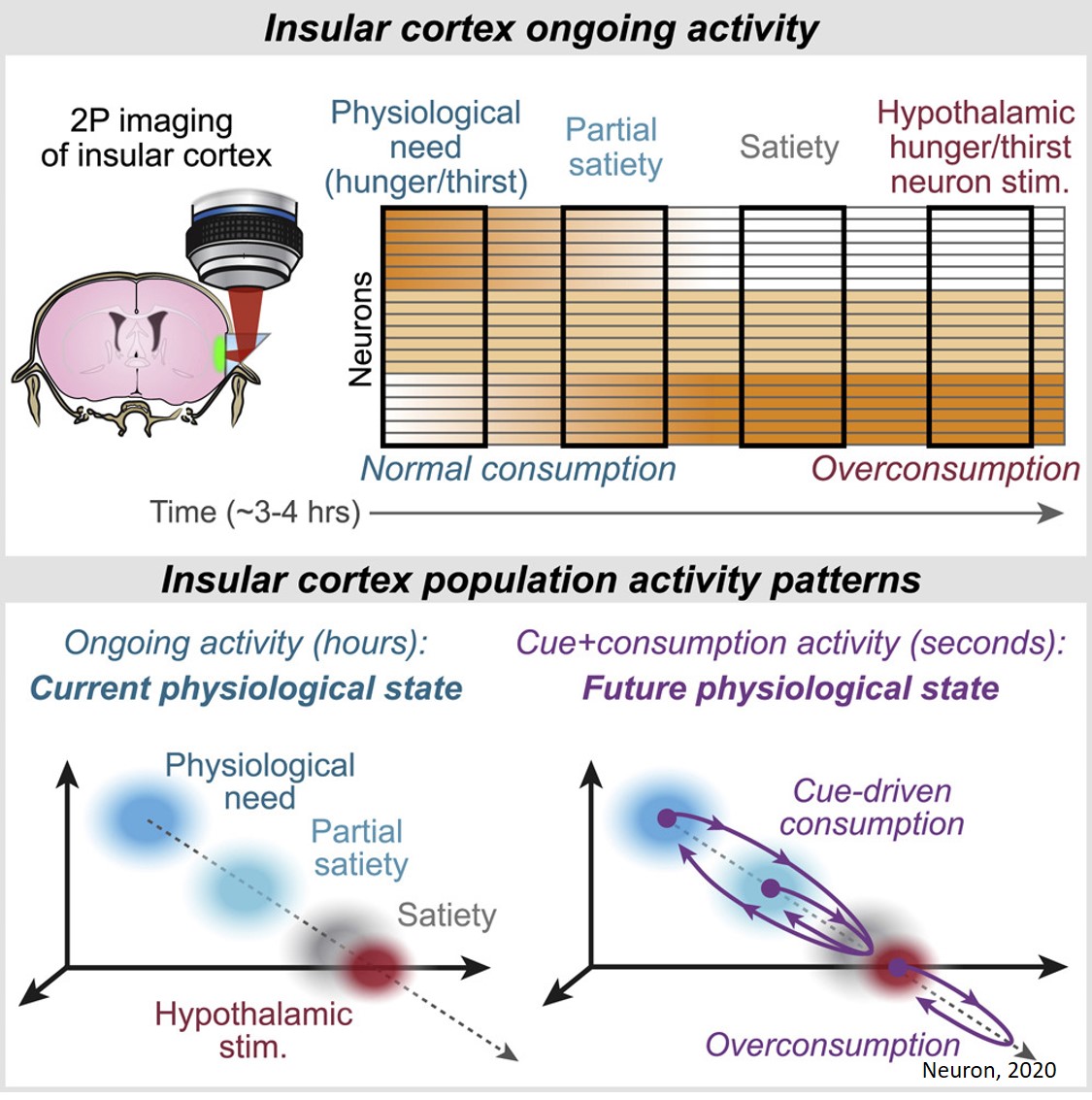 Interoception is the awareness of our physiological states; it's how animals and humans know they're hungry or thirsty, and how they know when they've had enough to eat or drink. But precisely how the brain estimates the state of the body and reacts to it remains unclear.

In a paper published in the journal Neuron, neuroscientists shed new light on the process, demonstrating that a region of the brain called the insular cortex orchestrates how signals from the body are interpreted and acted upon. The work represents the first steps toward understanding the neural basis of interoception, which could in turn allow researchers to address key questions in eating disorders, obesity, drug addiction, and a host of other diseases.

Using a mouse model developed in the lab, the researchers recorded the activity of hundreds of individual brain cells in the insular cortex to determine exactly what is happening as hungry animals ate.

The team observed that when mice hadn't eaten for many hours, the activity pattern of insular cortex neurons reflected current levels of hunger. As the mice ate, this pattern gradually shifted over hours to a new pattern reflecting satiety. When mice were shown a visual cue predicting impending availability of food - akin to a person seeing a food commercial or a restaurant logo - the insular cortex appeared to simulate the future sated state for a few seconds, and then returned to an activity pattern related to hunger. These findings provided direct support for studies in humans that hypothesized that the insular cortex is involved in imagining or predicting how we will feel after eating or drinking.

"It is as if the insular cortex is briefly estimating, or simulating, the physiological consequences of eating a meal," said first author. "When hungry, this would be a simulation of satiety. But when considering whether to eat in the absence of hunger, for example when eating dessert after a big meal, this would be a simulation of the consequences of overeating. We hypothesized in this paper that when insular cortex activity shifts from a pattern reflecting current bodily state to a pattern reflecting a future satiety state, the size of this shift actually predicts how rewarding it will be to eat the food."

A second experiment in which thirsty mice were presented with water yielded nearly identical results - with an important difference. The patterns of activity related to hunger and thirst were quite different, allowing the insular cortex to monitor multiple body states simultaneously.

"Another surprising finding was that insular cortex activity that reflects bodily state was independent of the hypothalamus, which is normally thought to be a master regulator of physiological need states in the brain," the senior author said. "In contrast, we found that even when we artificially activate hypothalamus in a way that compels sated mice to eat, insular cortex activity isn't fooled, and still reflects the body's current physiological state of satiety."

Next, the authors plan to directly manipulate specific patterns of activity in the insular cortex with the goal of changing the prediction the brain makes when presented with food or water, thereby making eating and drinking more or less rewarding.

"If successful, this approach might provide an intervention that could reduce seeking of unhealthy rewards (such as unhealthy foods or drugs of abuse) without affecting the seeking of other, healthier rewards," said the senior author. "Such an intervention could potentially have a lot of value in both medicine and psychiatry."