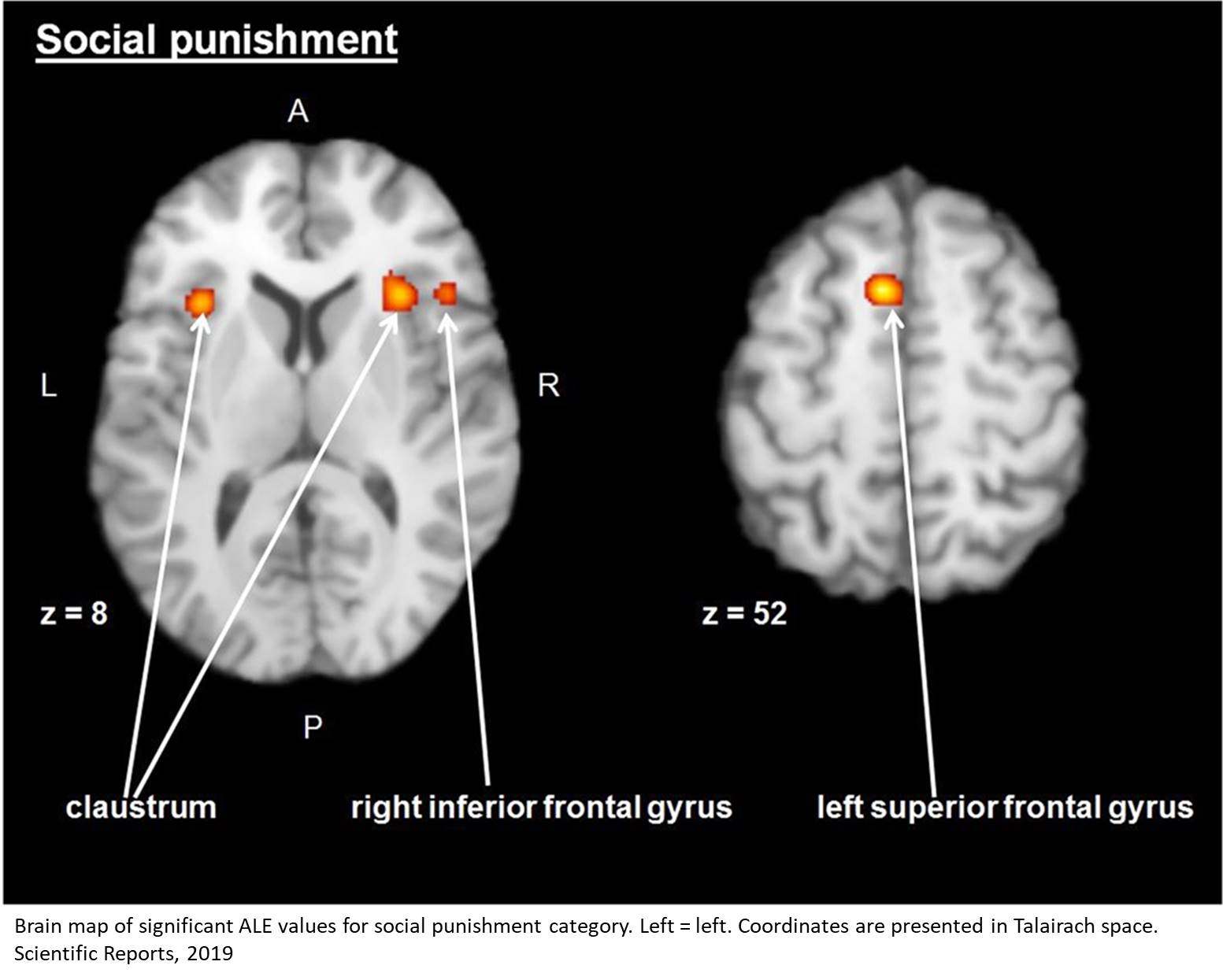 Researchers have conducted meta-analysis of 17 articles to find out which areas of the brain are involved in decision-making for rendering social punishment. It would appear that in case of both victims of violations as well as witnesses, punishment decisions activate the brain regions responsible for focusing one’s attention, processing information, and responding effectively to social interaction. The findings of the study were published in Scientific Reports.

Social punishment is necessary in order to maintain order and cooperation in society. In their everyday lives, people who have committed wrongdoings may face reprimand or rejection. A decision to invoke punishment may be implemented by a person who was affected because of such a violation of norms (‘second-party punishment’), or by a neutral person, who nevertheless knows about the norm violation (‘third-party punishment’).

It used to be a known fact that certain brain areas activate in victims of violations as well as in witnesses in response to different forms of social punishment. However, it was not entirely clear to date which areas were activated in particular.

A typical game for the study of social punishment is the Ultimatum where one test subject makes a decision about how much of the amount given to him or her will be given to another subject. The participant is free to divide the sum up as he or she likes, even keeping the entire amount. If the second participant finds the decision unfair, they can punish the offender (for example, reject the proposed division), i.e. execute ‘second party punishment’. Alternatively, the punishment can be invoked by the third test subject, the witness of the transaction, which will constitute third-party punishment.

Researchers employed activation likelihood estimation (ALE) to analyze data on the brain activity of 383 participants of 17 studies devoted to the subject of social punishment. The participants were either playing the Ultimatum game or were engaged in other types of strategic games simulating norm-violating events that would result in a social punishment. While the participants were performing these tasks, the researchers applied functional Magnetic Resonance Imaging (fMRI) to record their brain activity.

The analysis revealed that such areas of the brain as the bilateral claustrum (upon activation, spreading to the insular cortex), the left superior frontal and right interior frontal gyri were always activated for social punishment tasks. These areas related to either the salience network or central-executive network of the brain. These neuron systems are responsible for focusing attention, detecting errors, and processing contextual information - all essential components for punishment decision-making. The right interior frontal gyrus is regarded as a key region in the brain’s ‘emotional empathy network’, required for adequate responses to various social interactions. As for the left superior frontal gyrus, its main function is believed to store information in the working memory during decision-making processes.

However, the meta-analysis revealed no concordant activation in other brain regions, including those corresponding with the mentalizing network, which operate in a different way with respect to second-party and third-party punishments. This network is responsible for evaluating a wrongdoer’s intentions. Some regions of this network may be triggered differently, depending on the type of punishment under consideration.

The researchers have yet to perform a more in-depth analysis of the differences in the brain’s responses to various types of social punishment. Meanwhile, we can better understand what mechanisms underlie social control and people’s ability to cooperate by studying the similarities in information processing related to social punishment. Collaboration between B cells and T cells in celiac disease