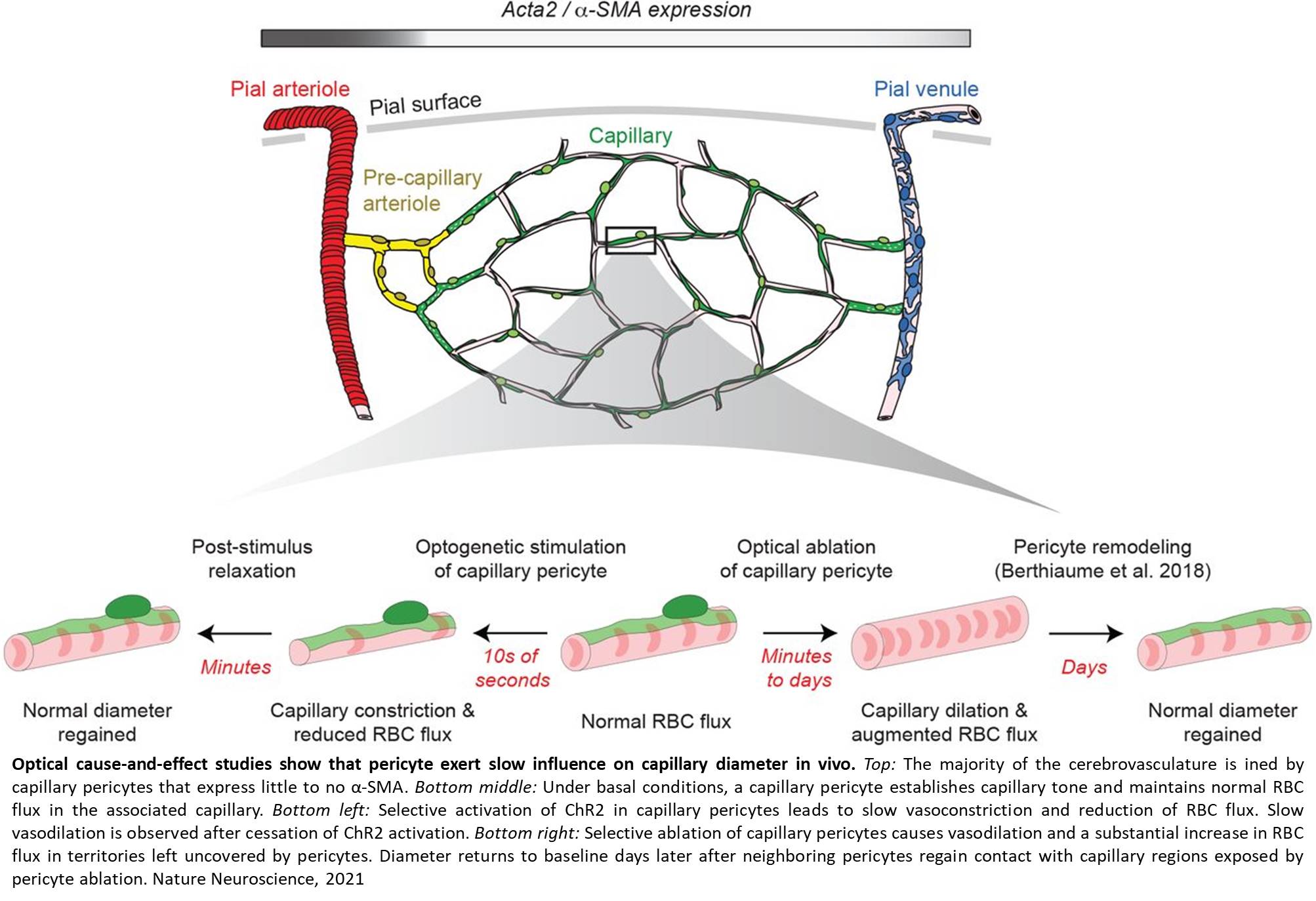 While the human brain has over 400 miles of total vasculature, little is known about the tiny capillaries that make up much of this intricate labyrinth of blood vessels critical for delivering oxygenated blood and nutrients to billions of brain cells.

According to the principal investigator understanding how this vast network regulates blood flow in the brain could hold the key to new treatments for neonatal and childhood neurologic conditions, such as stroke and hypoxia, and issues of aging like dementia and Alzheimer's disease.

"Insufficient blood flow contributes to many of the common neurologic problems seen in children and adults," the author said. "Yet, because we can't see the capillaries, which measure about 1/10th the thickness of hair, with in vivo clinical imaging techniques, determining how blood travels through this densely packed bed of vessels has remained elusive."

Wanting to get a closer look, the authors applied special techniques called two-photon imaging and optogenetics to isolate and study brain capillaries in animal models. Their findings published in Nature Neuroscience describe the dynamics that govern capillary blood flow in the brain and have broad implications for future avenues of brain research.

In the study, the scientific team focused on a cell type called a pericyte. Pericytes cover the capillary surface and are broadly categorized as a vascular mural cell.

"They're called mural cells because they adhere closely to the vessel wall (muralis is Latin for wall), but I to imagine it's like they're painted on the capillaries with long brushstrokes" the author said. "Pericytes live on all of these brain capillaries, contacting more than 90% of this dense network. Unlike mural cells of arteries and arterioles, they have long appendages that don't surround the whole vessel."

Scientists have long debated if pericytes are structurally equipped to influence blood flow in the brain capillaries.

"Whether brain capillary pericytes constrict and dilate capillaries has remained a controversial hypothesis since they were discovered," the author said. "Research exploring these dynamics in living organisms have resulted in mixed outcomes, with some studies supporting this theory, and others reporting the contrary."

"The connectedness of vasculature makes it very difficult to isolate the effects of pericytes from arterioles that strongly, but indirectly, impact capillary blood flow in the brain," the author said. "Capillaries also go undetected by most imaging technology that lack the resolution or are more focused on blood flow in the larger arteries."

The researchers proposed a specialized approach to study pericytes in a cell-specific manner.

"We used laser light like a switch to turn individual pericytes on. This was done by combining two-photon microscopy and optogenetics, something that has been done for years to stimulate neurons, but has only recently been applied to other cell types like pericytes," said the graduate student. "The important thing is we could manipulate just one pericyte at a time to understand their specific role in blood flow regulation. Previous studies were unable to flip just one light switch, they turned on the entire circuit breaker."

Their methods involved first engineering animal models with pericytes that could be stimulated with light. Then, they captured the capillaries' response to stimulation using real-time imaging of the living brain.

The findings confirmed that brain capillary pericytes in adult animal models do in fact regulate blood flow, with one key difference: it happens much more slowly than what is observed with upstream arteries arteries.

"Blood flow changes in arteries can shift within seconds whereas blood flood changes by capillary pericytes might happen over many minutes or even hours," the senior author said.

When the research team introduced a clinically used drug, fasudil, known to relax blood vessels into the models, they were unable to manipulate the pericytes in the same way.

"Fasudil acted on the pericytes and stopped them from constricting to optogenetic stimulation," the author said. "With this evidence, we can begin to think of different brain conditions where it may be possible to identify therapeutics able to relax the pericytes in the living brain and improve blood flow."

Stroke is one example of the broad implications of this research. In stroke, a clot forms causing blood flow to stop. Without oxygenated blood, brain tissue is rapidly damaged.

"Research has shown following a stroke or other conditions like brain or spinal cord injury, even as blood flow in arteries returns over time, capillary pericytes remain in a contracted state for a long time, impairing the entry of blood into the brain tissue," the author said. "Clinical imaging will confirm normal blood flow in the big vessels, but what are the implications of impeding blood flow in these tiny vessels we can't see and how might we use therapeutics to alleviate that resistance?"

Their findings also extend to Alzheimer's disease, vascular dementia and other conditions of the aging brain marked by accelerated pericyte pathology. Future studies will investigate how loss of pericyte function impacts blood distribution in the brain. Other ongoing research is studying pericytes in vasculature of the developing brain.

"Now that we know more about the dynamics of pericytes in controlling blood flow in the healthy brain, we can start to look for changes to these pericyte functions during disease," said a postdoctoral researche. "In other words, now that we know how pericytes should behave to support brain health, we can work to understand what happens when things go wrong like in stroke or injury."

The authors are also studying the neurological side effects of chimeric antigen receptor (CAR) T cell cancer immunotherapies. Studies have suggested pericytes express the same antigen the CAR T cells are programmed to target on cancer cells, causing the engineered cells to attack them. New models are needed to study this more closely in the lab.

"There are a lot of tantalizing questions to follow up on now that we have a better understanding of what capillary pericytes do in the healthy brain and improved tools to study them in the lab," the author said.