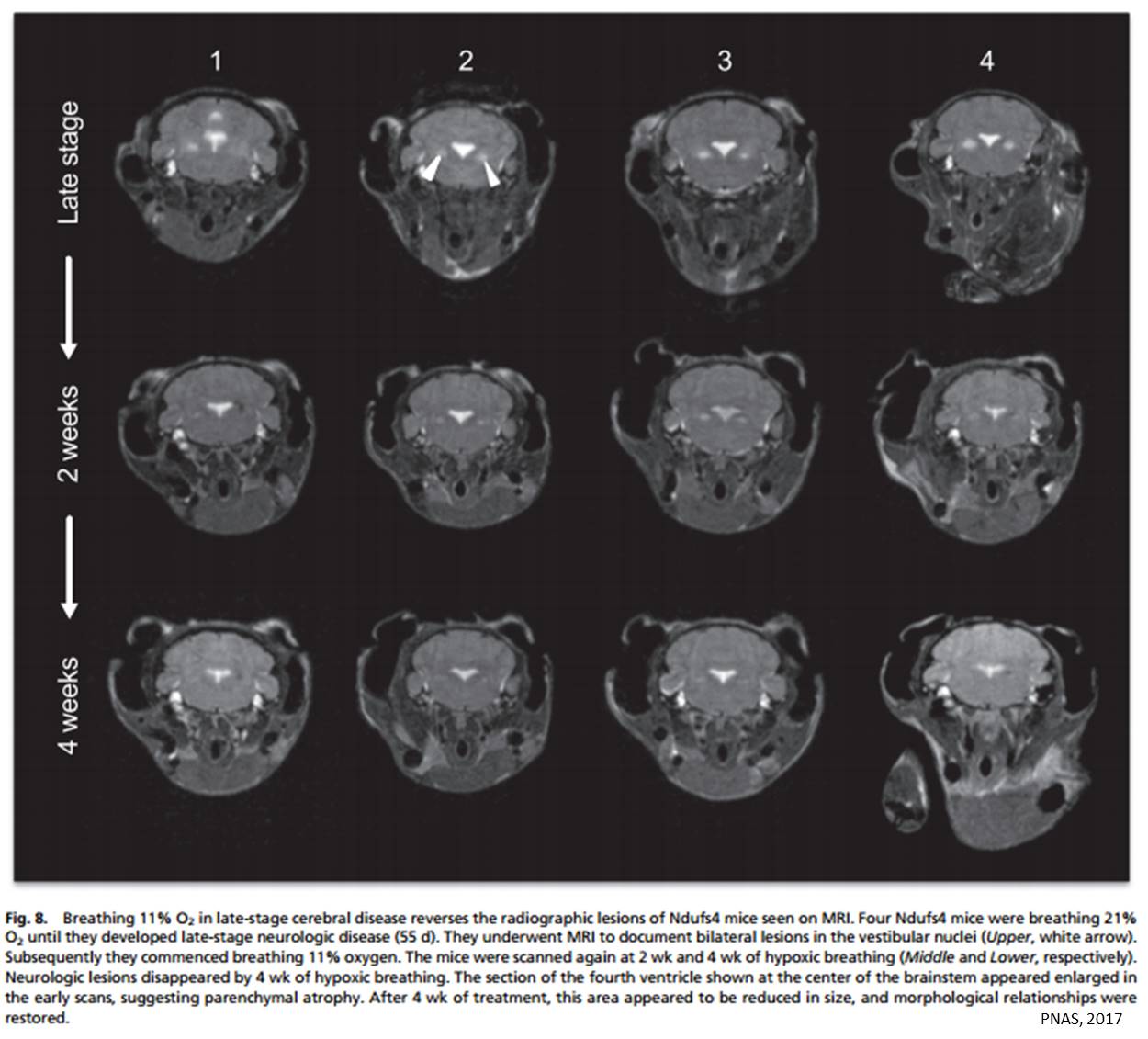 The report published in PNAS describes finding that, while alternatives to continuous breathing of 11 percent oxygen did not prevent symptom onset in a mouse model of Leigh syndrome - the most common pediatric mitochondrial disease - hypoxia therapy was able to reverse neurologic damage in animals close to the end stages of the disease.

"This is an extremely important next step in our exploration of the therapeutic potential of hypoxia for this neurodegenerative disease," says co-senior author of the report. "While hypoxia regimens that might have been more practical than the one we previously described were ineffective, we were excited to find that initiating 11 percent hypoxia treatment in mice on the brink of dying produced a complete reversal of both physiologic and behavioral symptoms. These stunning results provide hope that the brain lesions of Leigh syndrome may be reversible."

Genetic defects affecting mitochondria - subcellular structures that are essential to the conversion of nutrients into cellular energy - can have devastating effects in almost any organ system. With few exceptions, there are no effective treatments for mitochondrial diseases. Leigh syndrome is characterized by the development of lesions in the brain and produces neurodegenerative symptoms including muscular weakness and movement difficulties, loss of vision or hearing, and developmental delay. Symptoms usually appear in the first year of life and lead to death within two or three years.

In their 2016 study published in Science, the team first identified the potential of the hypoxia response to counteract genetic inhibition of the molecular reactions underlying mitochondrial function. They then showed that placing Ndufs4-knockout mice, an established model of Leigh syndrome, in an environment with 11 percent oxygen - about half of what is found at sea level - significantly reduced the development of typical symptoms and extended the animals' survival. A higher-than-normal oxygen environment of 55 percent accelerated death in the mouse model but had no effect on normal animals.

The current study was designed both to improve understanding of the effects of different oxygen levels on this mouse model and to see whether more practical hypoxia regimens might have results similar to those of the previous investigation. Imaging studies of Ndufs4-knockout mice raised in an 11 percent oxygen environment showed a complete lack of brain lesions at 250 days of life, while lesions appeared in less than 60 days in animals breathing 21 percent oxygen. While hypoxia-treated animals survived an average of 270 days, those raised in 21 percent oxygen only lived an average of 58 days. Breathing 55 percent oxygen led to rapid death of the Ndufs4-knockout mice from pulmonary edema, and the animals also developed lesions in the olfactory bulb of the brain.

While hypoxia treatment prevented brain disease in Ndufs4-knockout mice, it did not prevent the development of heart dysfunction, which appeared at around 150 days, well beyond the survival of untreated mice. Some Leigh syndrome patients develop a form of cardiomyopathy, and other mouse models in which Ndufs4 is knocked out only in cardiac tissue develop similar heart disease, suggesting the hypoxia treatment may have no effect on that symptom.