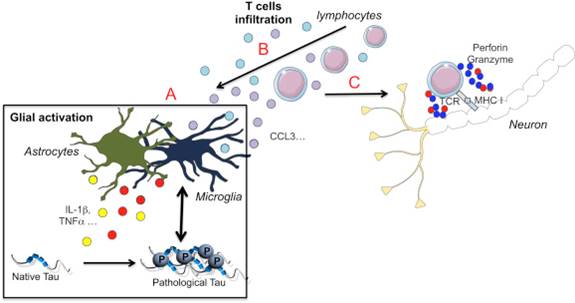 Inflammation drives the progression of neurodegenerative brain diseases and plays a major role in the accumulation of tau proteins within neurons. An international research team comes to this conclusion in the journal Nature. The findings are based on the analyses of human brain tissue and further lab studies. In the particular case of Alzheimer's the results reveal a hitherto unknown connection between Abeta and tau pathology. Furthermore, the results indicate that inflammatory processes represent a potential target for future therapies.

Tau proteins usually stabilize a neuron's skeleton. However, in Alzheimer's disease, frontotemporal dementia (FTD), and other "tauopathies" these proteins are chemically altered, they detach from the cytoskeleton and stick together. As a consequence, the cell's mechanical stability is compromised to such an extent that it dies off. In essence, "tau pathology" gives neurons the deathblow. The current study provides new insights into why tau proteins are transformed. As it turns out, inflammatory processes triggered by the brain's immune system are a driving force.

A particular protein complex, the "NLRP3 inflammasome", plays a central role for these processes, the researchers report in Nature. The authors already studied this macromolecule, which is located inside the brain's immune cells, in previous studies. It is a molecular switch that can trigger the release of inflammatory substances. For the current study, the researchers examined tissue samples from the brains of deceased FTD patients, cultured brain cells, and mice that exhibited hallmarks of Alzheimer's and FTD.

This especially applies to Alzheimer's disease. Here another molecule comes into play: "amyloid beta" (Abeta). In Alzheimer's, this protein also accumulates in the brain. In contrast to tau proteins, this does not happen within the neurons but between them. In addition, deposition of Abeta starts in early phases of the disease, while aggregation of tau proteins occurs later.

In previous studies, the authors were able to show that the inflammasome can promote the aggregation of Abeta. Here is where the connection to the recent findings comes in. "Our results support the amyloid cascade hypothesis for the development of Alzheimer's. According to this hypothesis, deposits of Abeta ultimately lead to the development of tau pathology and thus to cell death," said the senior author. "Our current study shows that the inflammasome is the decisive and hitherto missing link in this chain of events, because it bridges the development from Abeta pathology to tau pathology. It passes the baton, so to speak." Thus, deposits of Abeta activate the inflammasome. As a result, formation of further deposits of Abeta is promoted. On the other hand, chemical changes occur to the tau proteins resulting into their aggregation.