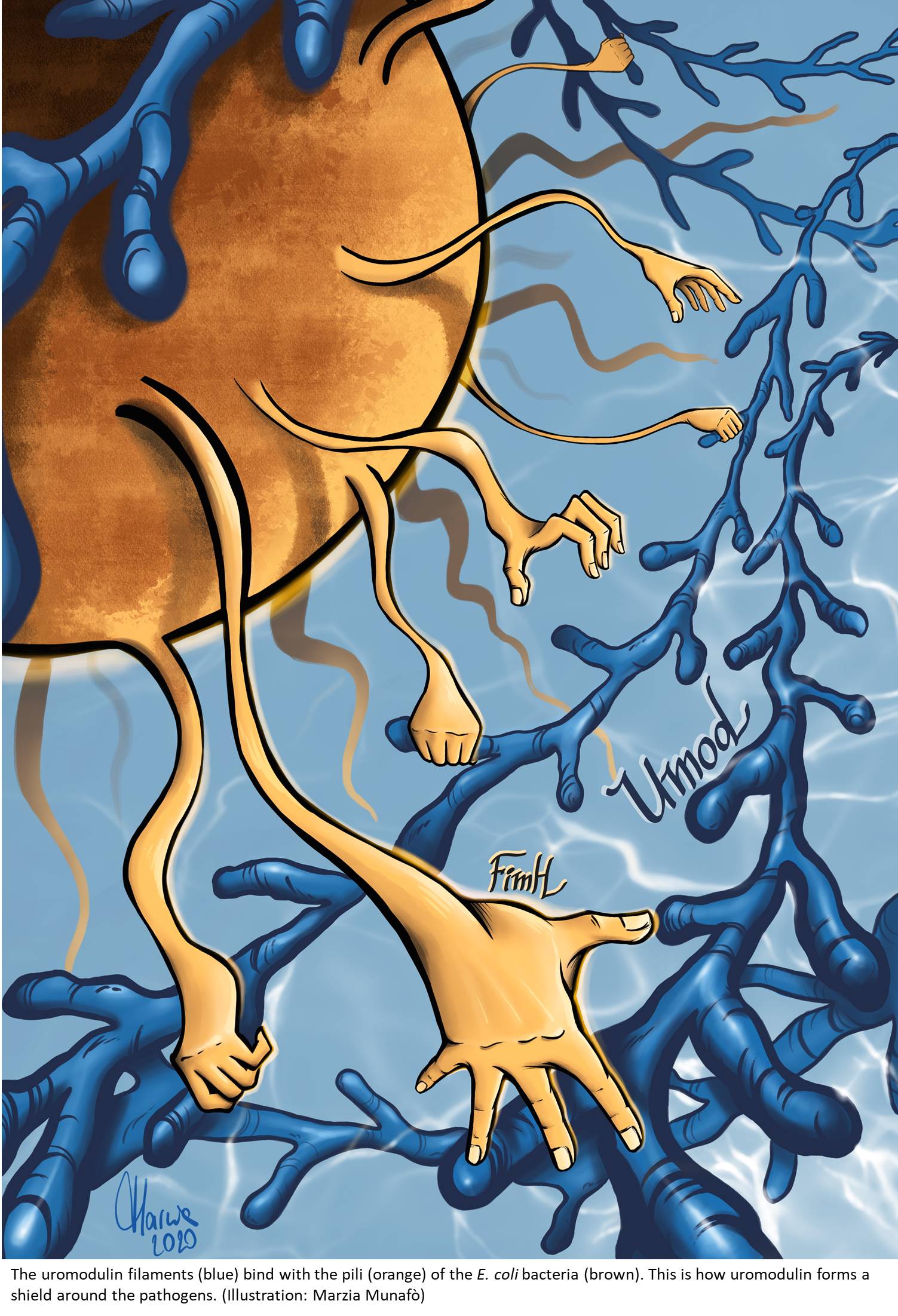 Anyone who has ever had cystitis knows that urinary tract infections of this kind are annoying and painful. They can be well treated by antibiotics, but may be fatal if left untreated. These infections are usually caused by what are known as uropathogenic E. coli bacteria when they bind to the cells of the bladder, ureter or urethra with their pili, the thread-like appendages that grow out of them like hairs. But protection is at hand in the form of a certain protein, produced naturally in the body, called uromodulin. Around 70 percent of all people carry a uromodulin gene variant in their genome, which means that they produce this protective protein in particularly large quantities. Accordingly, they have a smaller risk of contracting urinary tract infections.

But the exact process by which uromodulin prevents inflammation had never been understood. Now an interdisciplinary team, drawn from three research groups has filled this knowledge gap by investigating uromodulin's appearance and how the protein goes about neutralising uropathogenic E. coli. Their findings, which have been published in the journal Science, should help to develop new strategies for the treatment of urinary tract infections in the future.

First, the researchers analysed how the protein binds to the bacterial pili at the molecular level. "We already knew that a bond is formed and that this presumably plays a part in uromodulin's protective function, but nobody had studied this in greater detail," says one of the study's lead authors. Their biochemical investigations have now shown that the bacterial pili recognise certain sugar chains on the surface of the uromodulin and bind to them extremely readily and strongly.

Next, the team examined uromodulin using cryo-electron tomography, an imaging technique that produces three-dimensional views of the structure of proteins and cells with no need for chemical modification or dehydration. This showed them that uromodulin forms long filaments consisting on average of around 400 individual protein molecules strung together. And that each link of this protein chain contains the characteristic pattern of sugar chains to which bacterial pili like to bind.

The authors discovered that the uromodulin filaments literally envelop the pathogen, and that a single uromodulin filament can dock with several pili of a bacterium. "This neutralises the pathogens," the author explains: "Once the bacteria are shielded in this way, they can no longer bind to the cells in the urinary tract, which means they can't cause infection." Under an optical microscope, the team also noted the formation of large clumps of hundreds of uromodulin filaments and E. coli cells, which are then presumably simply excreted with the urine.

Finally, the researchers checked to see whether all these processes they had observed in the laboratory also occur in patients. They analysed urine samples from infected patients and found exactly the same interactions between uromodulin and the pathogens.

The research team's work offers pointers for how to treat and prevent urinary tract infections without using antibiotics. Until now, patients have often been given preparations that contain the sugar mannose. To a certain extent, these prevent the E. coli bacteria from attaching themselves to the cells of the urinary tract. "Thanks to our analyses, we now know that the bacterial pili recognise not only mannose but also other sugars present on uromodulin," says another lead author of the study. "This might indicate that treatment with combined sugar supplements would be more effective."

The new findings also help in the development of new active substances, adds the senior author. This is because during an infection the uropathogenic E. coli attach themselves to the same sugar chains on the cell surfaces of the urinary tract as on uromodulin. Pharmaceutical companies are looking to identify new active substances that will prevent precisely these interactions - but this risks also disrupting the protective binding of uromodulin to the bacteria. "It would obviously be a highly undesirable side effect for a drug if that treatment simultaneously interfered with a natural protective function," the senior author says. However, the research team's analyses have now shown that the bonds between bacteria and uromodulin are extremely stable and cannot be broken down by active substances - an important finding in the search for remedies for unpleasant urinary tract infections.