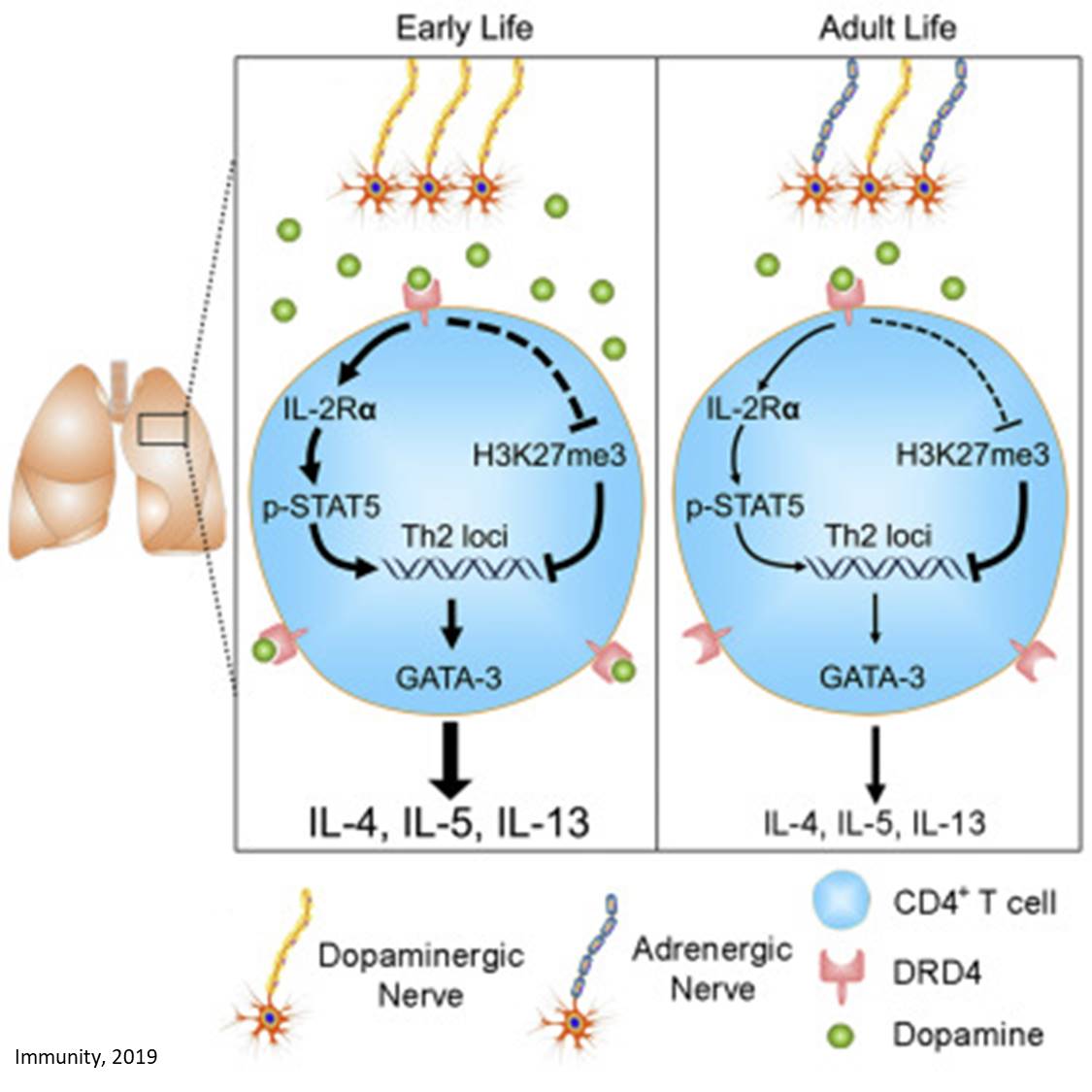 Neurons that produce the neurotransmitter dopamine communicate with T cells to enhance allergic inflammation in the lungs of young mice but not older mice, researchers report in the journal Immunity. The findings potentially explain why asthma susceptibility is higher in children than in adults. By highlighting the important role of interactions between the nervous system and the immune system in childhood asthma, the results could lead to new strategies for treating the common chronic disease.

"This is the first study that reveals a contribution of age-related nerve-T cell communication to susceptibility to the development of asthma in young children," says senior study author. "Since asthma often starts in early childhood, we believe that the identification of disease mechanisms unique to young age will provide novel therapeutic targets for early intervention of asthma."

Asthma is a potentially life-threatening chronic condition that intermittently inflames and narrows the airways in the lungs, causing wheezing, chest tightness, shortness of breath, and coughing. Although medical treatment and management of environmental triggers can help control symptoms, there is currently no cure for the disease. In the United States, asthma affects more than 26 million people, including an estimated 6 million children. In fact, it is one of the most common long-term diseases of childhood.

In the new study, the authors investigated the role of the developing nervous system in asthma characterizing early age. The researchers discovered that sympathetic nerves innervating the mouse lung primarily produced dopamine in early postnatal life but another neurotransmitter called norepinephrine in adult life. A similar pattern was evident when they compared lung and lymph node tissues from children up to 13 years of age and adults ranging in age from 40 to 65 years.

In addition, the researchers found that dopamine released by sympathetic nerves innervating the lung binds to the dopamine neurotransmitter receptor on CD4+ T helper cells to promote their differentiation into asthma-exacerbating Th2 cells, thereby enhancing lung inflammation. By contrast, norepinephrine-producing nerves in the adult lung had no such effect. Importantly, the findings reveal the similarity between mice and humans in terms of the innervation of dopamine-producing nerves in the early lung and the T cell response to dopamine.

In mouse models of allergen exposure, the dopamine-DRD4 pathway significantly increased Th2 cell inflammation in the lung tissue of neonatal mice, reducing mucus overproduction and airway hyper-responsiveness. By contrast, these effects were either not evident or much weaker in adult mice exposed to allergens.

Taken together, these findings demonstrate that the dopamine-DRD4 signaling between sympathetic nerves and CD4+ T helper cells in the lung plays an important role in augmenting allergic inflammation in early life. By facilitating inflammation, dopamine-producing nerves may endow the early lung with a mechanism of tissue repair following infection, which may be advantageous when the lung is immature and vulnerable to pathogens.

"Our findings provide evidence for the involvement of the communication between nerves and immune cells in susceptibility to asthma in early life," the senior author says. "It is important to emphasize that simply generically blocking the nerve-immune cell communication is not a good solution, as nerves play important roles in regulating functions of the airway, such as breathing. We will need to identify more specific pathways along the nerve-immune cell axis for therapeutic targeting."

Toward this goal, the researchers will set out to identify druggable targets to disrupt the nerve-T cell communication that goes awry upon allergen exposure. They will also evaluate whether this age-related communication impacts the progression of asthma from childhood to adulthood, and if so, how disease progression can be prevented. Another avenue of future research will be to investigate how allergen exposure and viral infection may affect nerve development in the lung, thereby triggering asthma in children.

"We hope our findings can be used to facilitate the discovery of specific biomarkers for the identification of allergic asthma in children and to predict the severity and progression of the disease," the senior author says. "In addition, targeting the communication between sympathetic nerves and CD4+ T cells via the dopamine-DRD4 pathway may be a strategy to battle the increasing prevalence of allergic asthma in children."