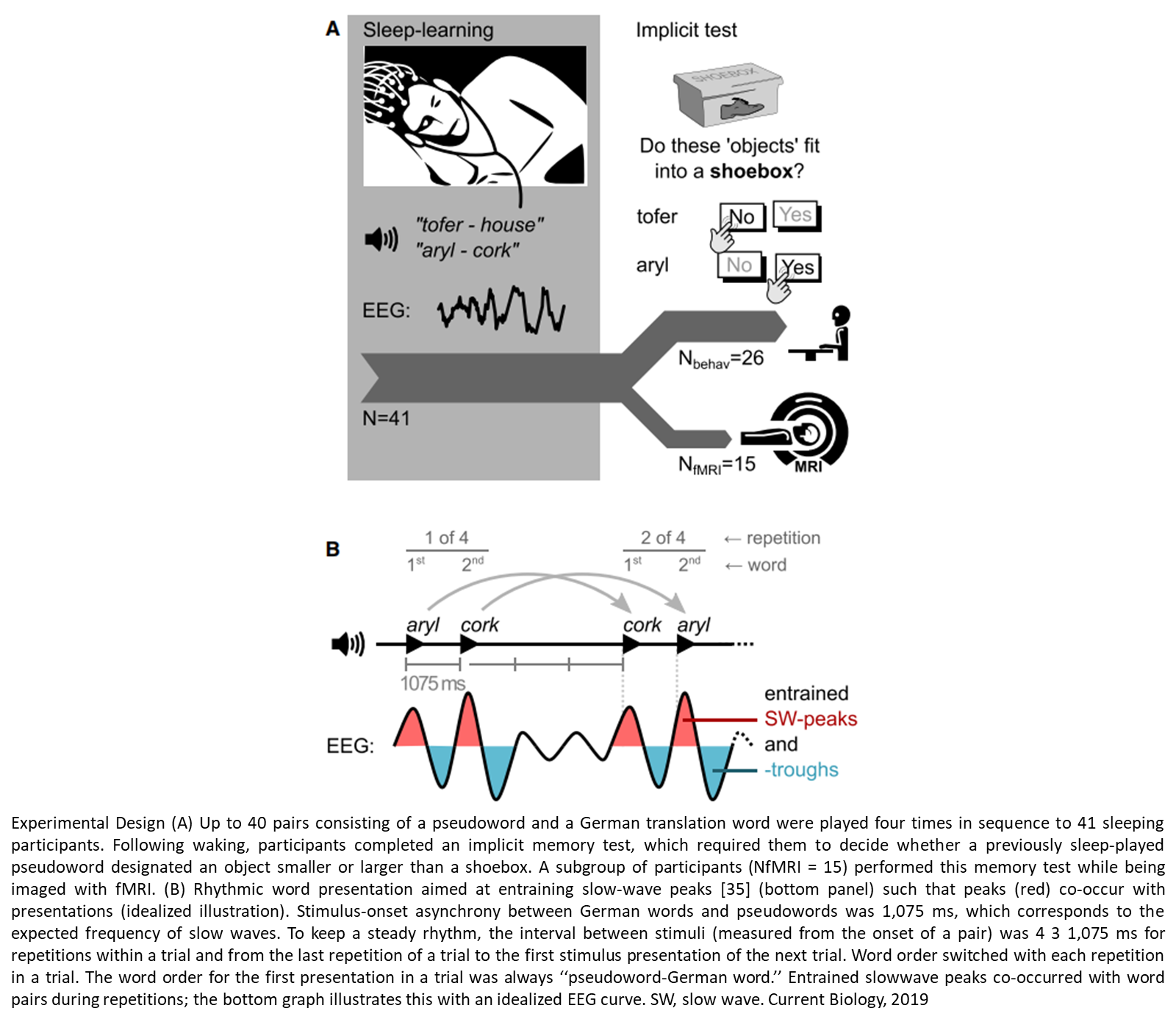 Sleeping time is sometimes considered unproductive time. This raises the question whether the time spent asleep could be used more productively - e.g. for learning a new language? To date sleep research focused on the stabilization and strengthening (consolidation) of memories that had been formed during preceding wakefulness. However, learning during sleep has rarely been examined. There is considerable evidence for wake-learned information undergoing a recapitulation by replay in the sleeping brain. The replay during sleep strengthens the still fragile memory traces and embeds the newly acquired information in the preexisting store of knowledge.

If re-play during sleep improves the storage of wake-learned information, then first-play - i.e., the initial processing of new information - should also be feasible during sleep, potentially carving out a memory trace that lasts into wakefulness. This was the research question authors "Decoding Sleep".

These investigators now showed for the first time that new foreign words and their translation words could be associated during a midday nap with associations stored into wakefulness. Following waking, participants could reactivate the sleep-formed associations to access word meanings when represented with the formerly sleep-played foreign words. The hippocampus, a brain structure essential for wake associative learning, also supported the retrieval of sleep-formed associations. The results of this experiment are published in the scientific journal Current Biology.

The research group examined whether a sleeping person is able to form new semantic associations between played foreign words and translation words during the brain cells' active states, the so-called "Up-states". When we reach deep sleep stages, our brain cells progressively coordinate their activity. During deep sleep, the brain cells are commonly active for a brief period of time before they jointly enter into a state of brief inactivity. The active state is called "Up-state" and the inactive state "Down-state". The two states alternate about every half-second.

Semantic associations between sleep-played words of an artificial language and their German translations words were only encoded and stored, if the second word of a pair was repeatedly (2, 3 or 4 times) played during an Up-state. E.g., when a sleeping person heard the word pairs "tofer = key" and "guga = elephant", then after waking they were able to categorize with a better-than-chance accuracy whether the sleep-played foreign words denominated something large ("Guga") or small ("Tofer").

"It was interesting that language areas of the brain and the hippocampus - the brain's essential memory hub - were activated during the wake retrieval of sleep-learned vocabulary because these brain structures normally mediate wake learning of new vocabulary", says the co-first-author of this paper. "These brain structures appear to mediate memory formation independently of the prevailing state of consciousness - unconscious during deep sleep, conscious during wakefulness".

Besides its practical relevance, this new evidence for sleep-learning challenges current theories of sleep and theories of memory. The notion of sleep as an encapsulated mental state, in which we are detached from the physical environment is no longer tenable. "We could disprove that sophisticated learning be impossible during deep sleep", says the co-first-author. The current results underscore a new theoretical notion of the relationship between memory and consciousness.