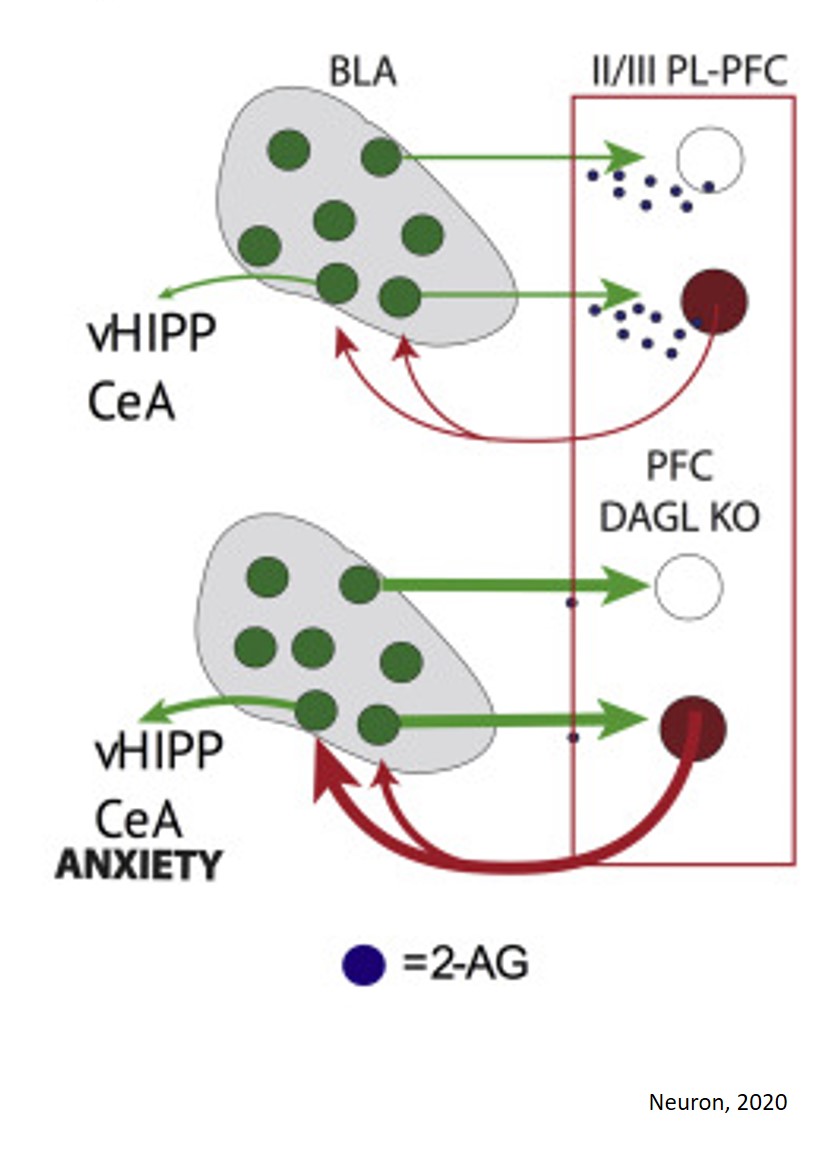 A molecule produced by the brain that activates the same receptors as marijuana is protective against stress by reducing anxiety-causing connections between two brain regions, researchers report.

This finding, published in Neuron, could help explain why some people use marijuana when they're anxious or under stress. It could also mean that pharmacologic treatments that increase levels of this molecule, known as 2-arachidonoylglycerol (2-AG) in the brain could regulate anxiety and depressive symptoms in people with stress-related anxiety disorders, potentially avoiding a reliance on medical marijuana or similar treatments.

When mice are exposed to acute stress, a break in an anxiety-producing connection between the amygdala and the frontal cortex caused by 2-AG temporarily disappears, causing the emergence of anxiety-related behaviors.

"The circuit between the amygdala and the frontal cortex has been shown to be stronger in individuals with certain types of anxiety disorders. As people or animals are exposed to stress and get more anxious, these two brain areas glue together, and their activity grows stronger together," said the paper's corresponding author.

"We might predict there's a collapse in the endocannabinoid system, which includes 2-AG, in the patients that go on to develop a disorder. But, not everyone develops a psychiatric disorder after trauma exposure, so maybe the people who don't develop a disorder are able to maintain that system in some way. Those are the things we're interested in testing next."

The study also found that signaling between the amygdala and the frontal cortex can be strengthened through genetic manipulations that compromise endogenous cannabinoid signaling in this pathway, causing mice to become anxious even without exposure to stress in some cases. This finding demonstrates that the cannabinoid signaling system that suppresses information flow between these two brain regions is critical for setting the level of anxiety in animals.

"We don't know how or why this cannabinoid signaling system disappears or disintegrates in response to stress, but it results in the strengthening of the connection between these two regions and heightened anxiety behaviors in mice. Understanding what's causing that compromise, what causes the signaling system to return after a few days, and many other questions about the molecular mechanisms by which this is happening are things we're interested in following up on," said the senior author.

The authors are also interested in how the system reacts to more chronic forms of stress and determining whether there are other environmental exposures that compromise or enhance this system to regulate behavior.